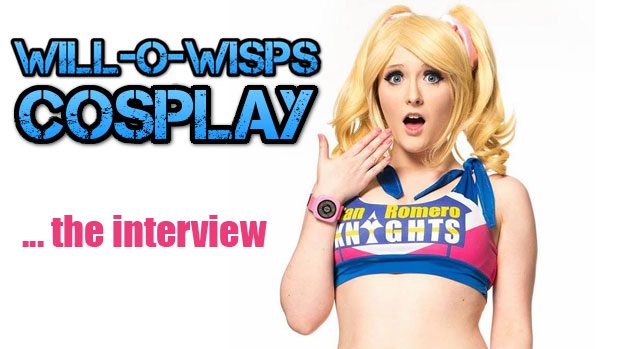 Impulse Gamer recently caught up with Australian Cosplay Artist Will-O-Wisps Cosplay (aka Will-O) to talk about her passion, what makes her tick and what does 2016 hold for her when it comes to Cosplay!

Tell us what drew you to cosplay?

I first discovered cosplay when I was 11 years old, thanks to sites like YouTube and deviantART! When I was younger, I had trouble making friends with the same interests as me, so when I discovered Twinfools’ work on YouTube, I was amazed at how much fun it looked like he had with his friends, all while being his favourite characters! I thought it may be a great way for little old me to express my geekiness and make friends at the same time… and it worked! Cosplay opened up a whole new world for me, and without it, I think I’d be some sort of hermit or something, haha. 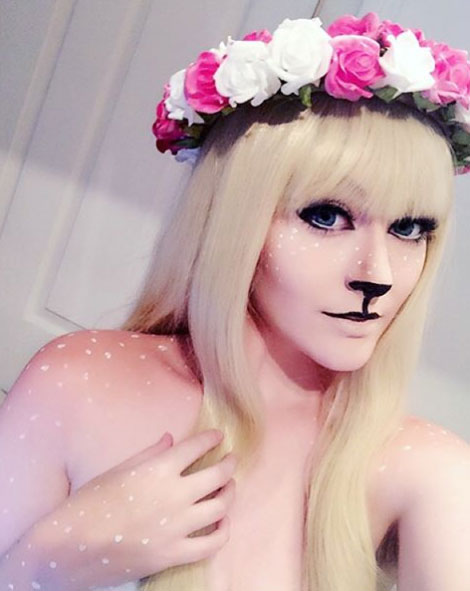 What’s been the most challenging cosplay to create?

By far, it had to of been my Dead Master cosplay that I completed for Sydney Supanova 2015. I had to make a whole bunch of props, including a headset with a veil and horns, a pair of ‘wings’ that had to be strapped onto me underneath my backless dress with a belt and a metal base, and of course the killer scythe, which was literally completed the night before the convention! Everything mentioned was made with foam; ranging from Styrofoam slabs, craft foam, dense polystyrene blocks, and even expanding foam. The details on the scythe and wings took forever, and I actually bought a figma of the character to study while making it all! I couldn’t have done it without the help of my dad though, he’s a legend. He introduced me to the dremel, and it’s been a handy tool for me ever since.

Out of all the characters you have cosplayed, which has been your favourite and why?

My favourite character by far has to be Meme-chan, from Me!Me!Me! My Meme-chan cosplay is really important to me, not only for the fact that the Me!Me!Me! series is my ultimate obsession and she is my #1 waifu, but that cosplay really helped me grow as a cosplayer. I’ve achieved so much with it! It was the first cosplay I made on my own, and it made me want to improve my skills, so I revisited it and made it even better for when I danced on stage with my crew at Neko Nation earlier this year, for Teddyloid’s live performance! It truly was a dream come true!! For Teddyloid (the Me!Me!Man himself) to compliment my cosplay and dance cover was the ultimate compliment for me. Ever since, I’ve been KNOWN as Meme-chan; and I’m extremely okay with this, heehee! 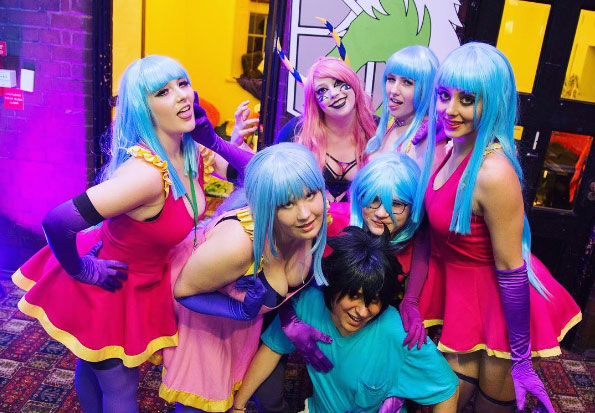 How did it feel to be Juliet in cosplay?


Juliet Starling has got to be one of the most FUN characters to cosplay!! She’s so bubbly and fun; A nice change from stern and rigid characters I’ve previously done, like Queen Elsa, and Kiryuin Satsuki from Kill la Kill. To be Juliet is to forget your worries and just have FUN. When I’m Juliet, I don’t care what others think. For the longest time I was worried about how others thought of me, especially if I wanted to cosplay as a character who was considered to be ‘scandalous’.. But Juliet taught me that that isn’t an issue. It doesn’t matter what you look like; As long as you’re happy and you aren’t somehow bringing harm to someone else; Do it, and do it with pride! Because honey, life’s too short to be stressing over a bit of skin. We all have it! It’s yours, and you can do what you want with it! 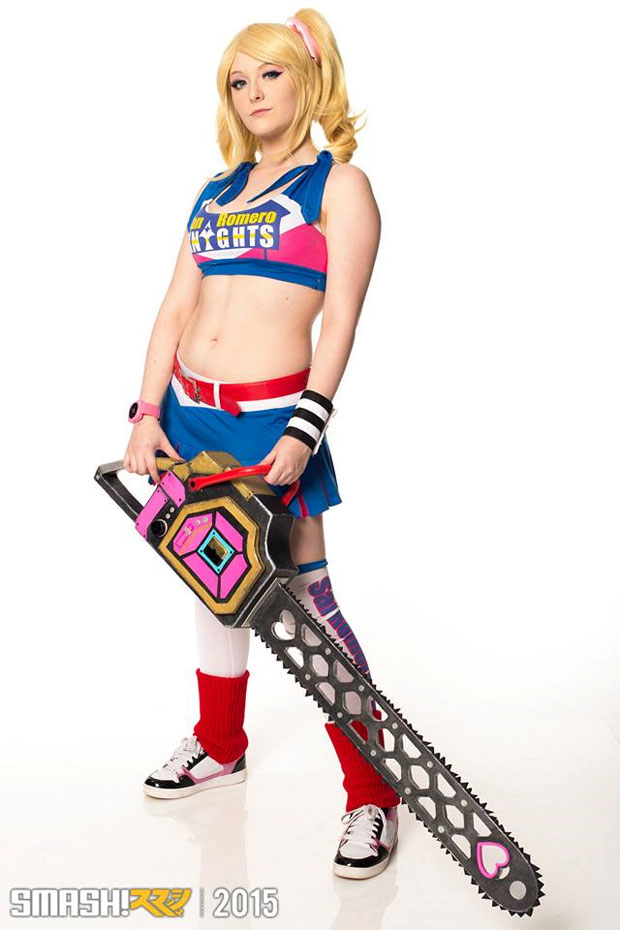 She’s a ditzy blonde cheerleading zombie-hunter who can shoot sparkles and rainbows out of a fricken CHAINSAW!! How could you NOT love something like that?? She can ‘like, so totally murder your face off’ all while looking cute and making witty remarks at the same time. TOTALLY NEATO! 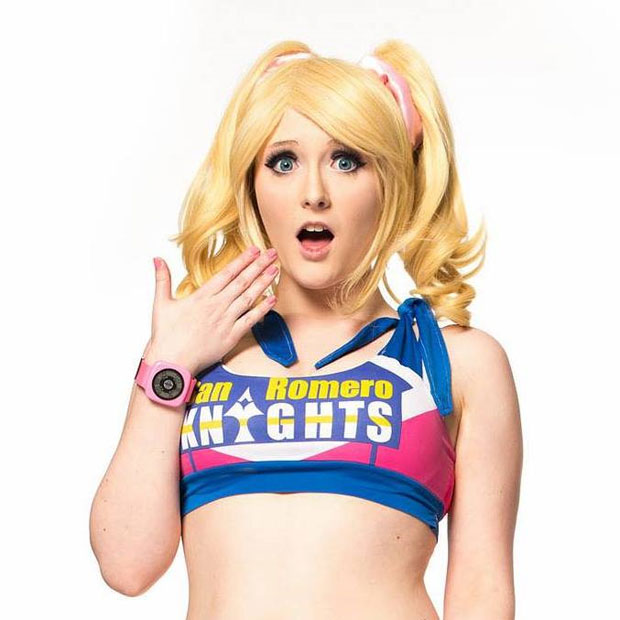 Morrigan has got to be one of my most FAVOURITE characters of all time! I’ll be honest though.. My Morrigan cosplay was quite rushed, to say the least. Looking back on it now, I wish I took more time out to make it look better, but there’s plenty of time to do that in the future, I suppose! I really like her costume design, and wearing it is quite empowering! I definitely plan on revisiting her, just as I did Meme-chan, so I can improve it and return as the Mistress of the Night! 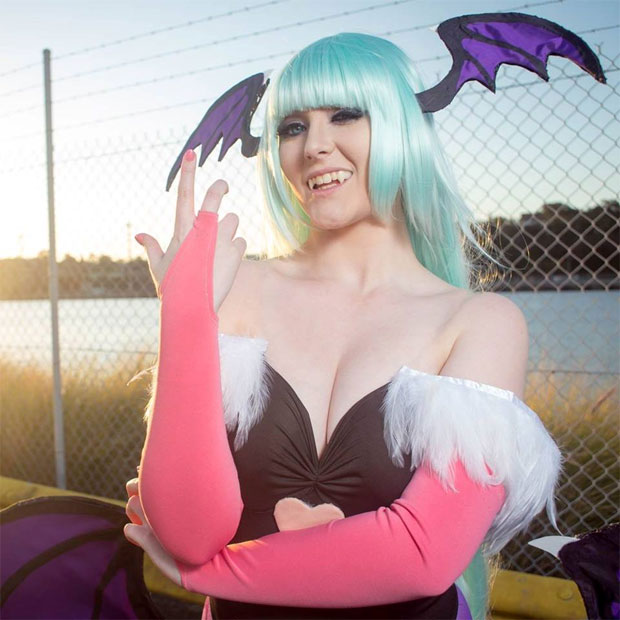 The first time you looked in the mirror and saw yourself in character, what did you think?

The first cosplay I ever had was Hinata Hyuga – But it was a bit muddled, you see. I had the ‘part one’ wig and shoes paired with the ‘part two’ or ‘Shippuden’ outfit.. But even so, I LOVED what I saw. Back then, makeup wasn’t a concern of mine, and I had no clue how wigs worked.. But even still, the feeling I got when I looked at myself was incredible. I couldn’t stop smiling!! I wish I could go back and feel it all over again!

If you had an unlimited budget, what cosplay would you create?

Last year I would have told you I’d want to make a realistic Toothless (the dragon) quad-suit, with mechanical wings and LED lights on the inside, with a smoke machine and all! But today.. As of this very moment, I’d spend it on creating the ultimate Morrigan Aensland cosplay, with moving wings!! Or.. an incredibly anatomically correct Kindred cosplay, from League of Legends! I plan on doing that in the future too, but if I could sink all the money I wanted into it.. I’d make Wolf’s head like some sort of Chinese dragon puppet, with smoke machines and LEDs (much like my Toothless idea, haha) I’d want my Lamb fursuit to be incredibly soft, and the seams to be invisible.. As for the hooves, I actually already have a pair from Chaos Costumes on Etsy! I’m ITCHING to use them for this project, heehee! 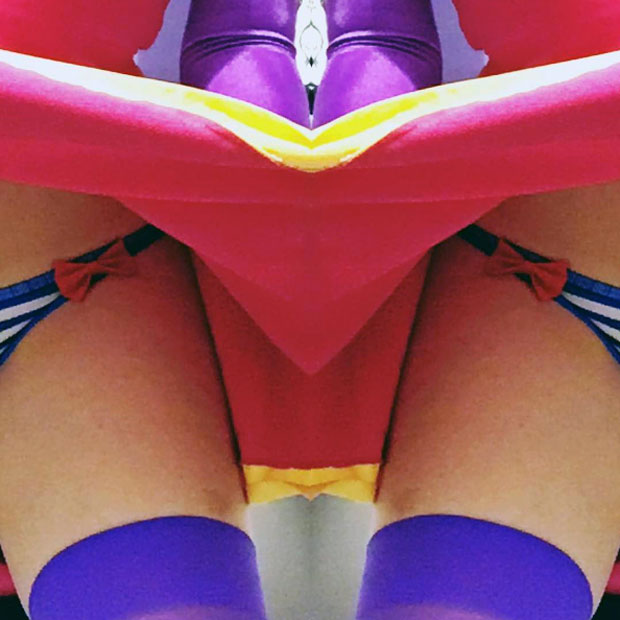 Okay, tell us about the err.. Meme-chan bikini bottoms?

Well, seeing that I’m a Me!Me!Me! fanatic, I wanted to nail every detail that I could in time for my performance! And I thought: “If I’m going to be on stage, people MAY see my underwear.. SO if they do, let’s make it all for accuracy!” So I raced to my nearest Big W, bought a pair of striped blue and white panties, cut up and old red t-shirt I had and hot glued little bows on the sides to match Meme-chan’s bikini bottoms! Even though I’m pretty sure nobody really saw them all that much, it gave me a sense of secret pride knowing I went to those lengths to make my Meme-chan cosplay perfect!

For cosplay? I’d have to say it’s a tie between my Chaos Costume hooves that I had commissioned specifically for my Kindred plans.. Or my Juliet Starling chainsaw. I was EXTREMELY proud of that thing; I made it all on my own, without the help of anyone, in under a week or so! My dad watched me make the whole thing, and he was super proud of me too! It’s super light, being made out of Styrofoam slabs and balsa wood – The heaviest thing on it is the red handle, which I found in the garage and stuck it on because it was the closest shape I could find to the original. I just WISH it’d light up rainbow.. That’d be SICK! 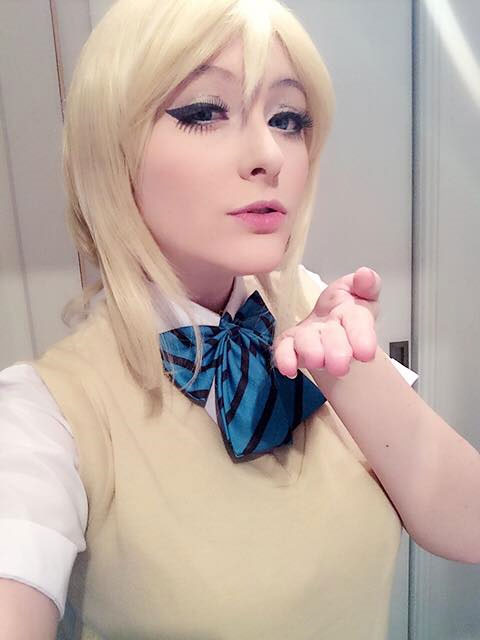 At first I was worried that I’d be judged quite harshly.. But as soon as I went through the gates, all I got was compliments, photos and questions! It was a HUGE boost in confidence, if I’m honest. A lot of people thought I worked there as some sort of booth babe, which I found funny since a lot of the time I was waiting around a ‘school bus’ which was actually like a limo on the inside; rainbow LEDs, a pole and all. Perfect for Juliet, really! The people there didn’t judge AT ALL, and I wasn’t harassed once. Sadly, I can’t say the same for when I went to SMASH late last year. I went as the same character, and got all sorts of rude comments, mostly from teenage boys trying to show off in front of their friends. But at Sexpo, childish little pervy school boys aren’t allowed! Everyone was polite, and mature – But not too serious! Everybody had a sense of humour and open minds, which is what I loved about Sexpo. 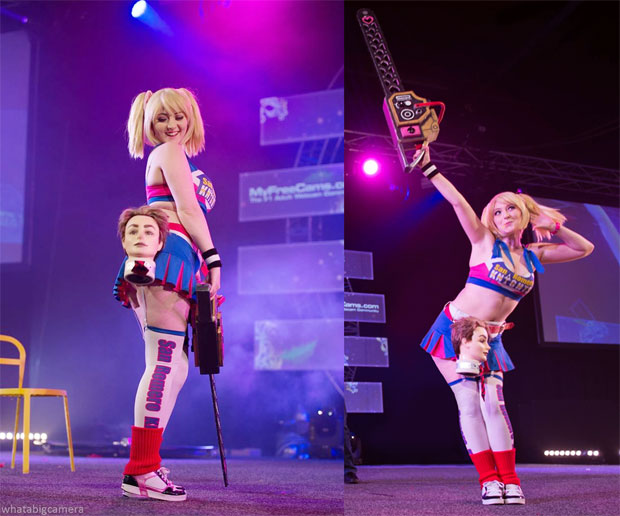 So what does Will-O do in her secret identity?

Well here’s the thing; In cosplay, I’m an extroverted, bouncy happy-go-lucky geek. Out of cosplay, I’m a lazy, shy introvert who likes naps and alone time. I feel like myself when I’m not trying to be myself, if that makes sense? Haha! It’s so strange.. But I like it. I’m a natural introvert, so being able to tolerate large groups of people for long periods of time, all while making and meeting up with friends is a win-win for me. I do need my alone time to keep energised, but I like being able to break the stereotype of being an introvert with only 1 or 2 close friends.. Because I’m an introvert who has an entire extended family of close friends – All who like the same things as me and make incredible memories with me! 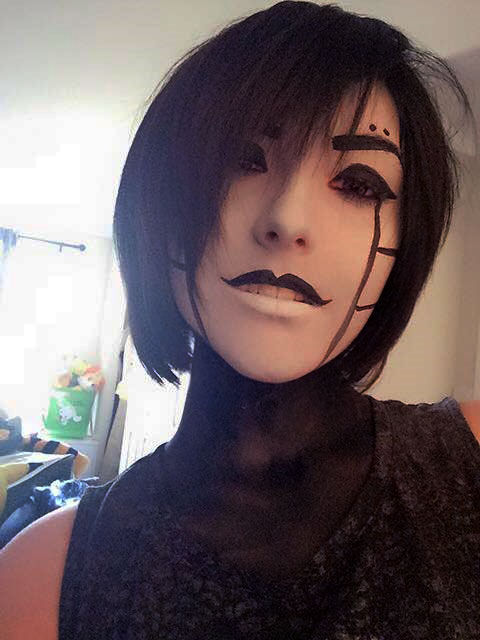 Lots of improvement, growth and of course – More cosplay! I’ll be a catgirl with one of my best friends at Neko Nation Sydney (in June), and there are so mny more conventions coming up that I need to prepare for! Not to mention a very special secret cosplay is in the making for SMASH, this year! I can’t wait to debut her! Overall, I think my number one goal is to inspire someone. To do that would make things come full circle for me, I think. I want to spread the cosplay-bug! 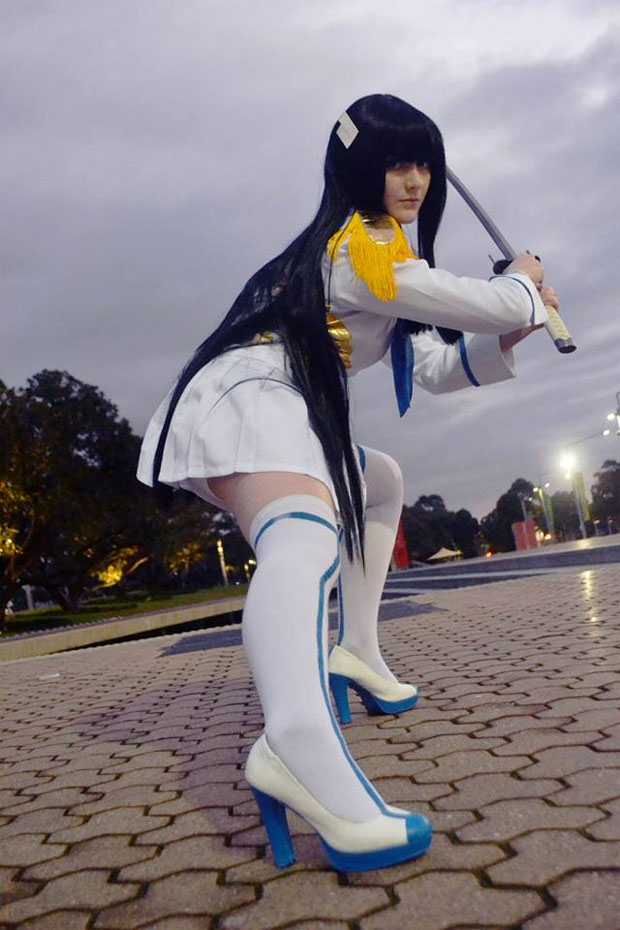