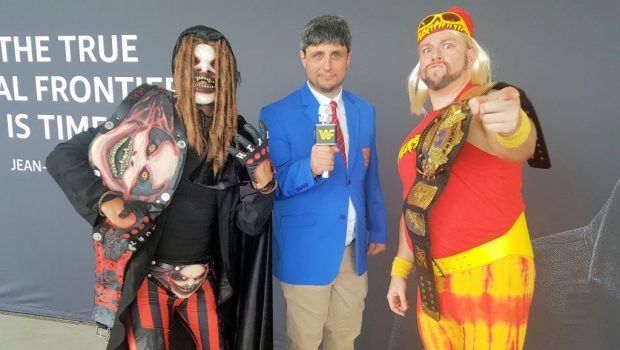 Summary: Worth a look if you have always heard about the ones overseas and wanted to go to something similar. Due to various reasons a lot of things are mixed together which is not exactly a bad thing.

I had not been able to make it to this previously as I was working when it was on last year and it was cancelled the year before. As John Jarrat said when I talked to him the other week they had been “hammered” by not having it run properly for the last few years so it was great to see it back this year with the full roster.

This was a real mix of different stuff to get the audience in with comics and anime in the mix with movies and a little bit of video game stuff but not really as much as something like Pax South but it is not really that sort of convention.

Due to the train works it took me two hours to get to the convention even leaving early from home. I mainly just walked around stopping to get photos of the attendees on occasion and look at the different vendors.

There was a full program of events but the only one I got to see was the Australian Film Showcase: Little J & Big Cuz – Clare Madsen (Script Producer/Script Editor) and Samuel Nuggin-Paynter (Writer) which turned out pretty well and I learned a lot about the show. I also talked the script editor after the show about talking with people on-country when I was doing customer service for a government organisation, it is a different experience and the show reflects this.

There wasn’t really anyone I wanted to get a photograph or autograph from except maybe John Jarrat and I had already talked to him last week so I would not have anything to say to him.

I did enjoy ‘the alley’ artists stalls and walked through it several times to see someone I had met on Instagram from one of my online life drawing sessions but had not actually met and got another couple of comics that jumped out at me. There were rewards walking through it more than once as you could notice more things each time and I could have spent at least an entire day talking to every single one of the artists.

Walking around during the day were the attendees in cosplay and they were glad to oblige for photos. That would be the main attraction of this event if you are into cosplay as there seemed to be at least one “meet up” for a major group that they had organised themselves. Also there were groups of people who came together so they could support each other.

It was a generally friendly crowd and I did ask everyone if they wanted a photo with very few refusals. Shout out to Xena the Yorkie support dog who had to be carried as she got tired, not much support there.

While I don’t know if I would go more than one day if you were more into the events or wanted to go see a specific thing on each day or had structured an entire weekend around it you would get a lot more out of it as would going with a group of people. Bring an extra bag and maybe something to sit on as it is a long day of walking around with not as many seats as I would like as it always the way with these things.

It was a great day and I would have gone just to check it out if I wasn’t covering it as I had wanted to see what the Australian one was like after my experience in the USA.