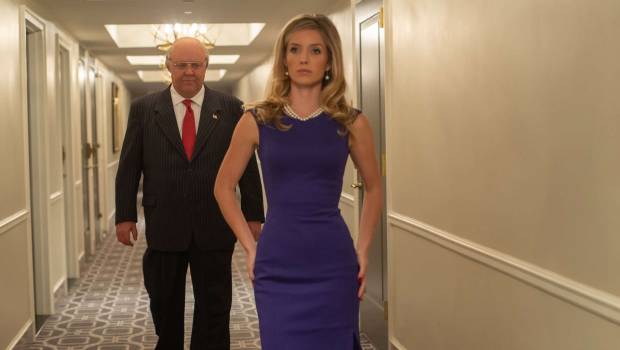 Audiences who have seen the film “Bombshell” will be familiar with the Roger Ailes’ story. He was a staunch republican who established Fox News and subjected many women to sexual harassment. “The Loudest Voice” is a TV series that looks at various chapters from Ailes’ Fox career with equal amounts of searing tension and drama.

This series is written by Alex Metcalf and Tom McCarthy (“Spotlight”). It is based on a book written by journalist, Gabriel Sherman. Russell Crowe is virtually unrecognisable as the lead character thanks to various prosthetics. He puts in an utterly convincing and engrossing performance as a self-proclaimed “multifaceted” man.

The series is split up into seven episodes covering different periods from 1995 to 2016 inclusive. It tells the stories well including: the origins of the cable news network, September 11, the Iraq war and the Obama and Trump administrations. What it is missing at times is the question of “Why?” While we get to know various characters, their motivations are not always explored in any great depth. For example, Ailes’ wife Beth (Sienna Miller) progresses from career woman to subordinate spouse and Mum with little explanation.

This series tackles some difficult subjects like Ailes’ graphic sexual abuse of the fragile Laurie Luhn (Annabelle Wallis). There is the bullying and harassment of Gretchen Carlson (Naomi Watts who is excellent). Carlson becomes the victor after suing Ailes. She opens the floodgates for other victims to come forward and depose the megalomaniac from his top job.

This story is full of contradictions but that is often what makes it so compelling. There is Ailes claiming that the initial aim of Fox News is to have balance and fairness when the reality is anything but. Fox News is nothing short of a right-wing propaganda machine but Rupert Murdoch (Simon McBurney) doesn’t seem to mind because it earns him mega dollars.

“The Loudest Voice” will appeal to viewers who are curious about the downfall of journalism and the proliferation of fake news. The series is an engrossing watch because it shows Ailes’ fox-like cunning, smarts and megalomaniacal tendencies. You’ll shiver at some scenes when he is so disgustingly abusive. Fans of Seth Macfarlane will also appreciate his turn as Brian Lewis.

“The Loudest Voice” is not an easy watch but it is entertaining and often eye-opening. It is dramatic and thrilling in showcasing politics in the New Corp offices and the US in general. Crowe’s performance is nothing short of award-winning. And it all comes to a satisfying crescendo with John Lennon singing his classic, “Gimme Some Truth.” MeToo.