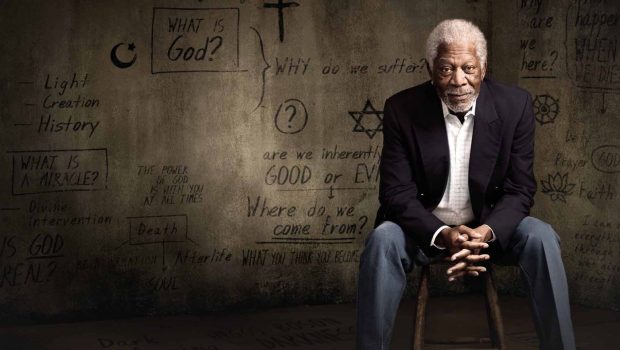 The Story Of God DVD Review

Summary: “The Story Of God” is a hopeful documentary that is very informative and interesting. Morgan Freeman’s inquisitive interview style is both engaging and infectious.

Morgan Freeman has played God before. In the documentary series, “The Story Of God” it does what it says on the tin. It sees Freeman travelling to a number of different countries to explore religion and God. It’s a respectful and informative series that suffers because it is rather short for such a big subject.

The program itself is split into six separate episodes. The first looks at life beyond death and the realm of grief. It was Christianity and Christ’s crucifixion that gave people hope of life after death, while the Hindus believe in reincarnation and karma. There is a look at the Egyptian tombs and the day of the dead ceremonies as well as how death could be dealt with in the future. It shows that there may be a possibility for robotic androids to have our thoughts and feelings as input.

The apocalypse episode looks at the importance of the city of Jerusalem in Christianity, Islam and Judaism. It also examines the Roman army battles of the past and the radical extremists of today. There are also scenes showing Buddhists seeking enlightenment as the true revelation of God. There is also a quick look at the doomsday cults where its members meet the grisly end of mass suicide.

Freeman also looks at topics like creation, who is God, why evil exists and the idea of miracles. This series also dedicates time to other religions besides the major ones and touch on the Aboriginal dreamtime and Zoroastrians, to name a few. Freeman is a charismatic, inquisitive and reverent interviewee despite his own self-proclaimed atheism. It doesn’t matter if he’s interviewing the Chancellor of the Pontifical Academy of Sciences and Social Sciences, Marcelo Sánchez Sorondo or a reformed radical extremist turned educator. The list of talking heads is impressive and broad with professors, archaeologists, anthropologists and scientists offering very informative commentary.

“The Story Of God” is a hopeful one. It highlights the commonalities between religions and offers up an insightful perspective on the different belief systems that exist both today and in history. Rather than drowning itself in dogma or being overly sanctimonious or preachy, this film is a fascinating watch. The series also boasts gorgeous videos of time-lapse photography and sweeping Go-Pro footage as well as Freeman’s gentle narration and affable and inquisitive nature that often proves rather infectious. Watch this and there is no doubt you will walk away feeling enlightened. 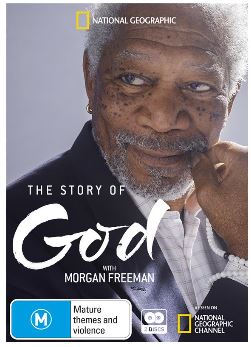