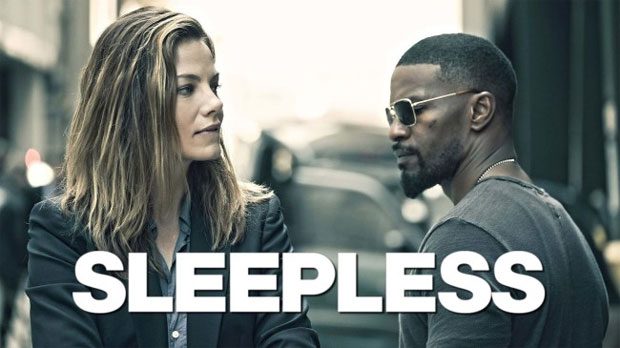 Summary: Get some sleep instead of watching Sleepless.

Baran bo Odar’s Sleepless is an American adaptation of the critically acclaimed French action thriller Nuit Blanche (2011). Sleepless loads its deck with a very strong award winning cast – Jamie Foxx, True Detective’s Michelle Monahan, and Stranger Things’ David Harbour. It has an exciting 24-hour setting in night-time Las-Vegas – the sleepless city of the title. Sleepless is a total bust: an overstuffed thriller that gambles away its excitement with too much exposition, an absence of characterisation, and characters dripping with so much cliché that they are parodic. Signifying Roadshow’s faith in the home release, the DVD has no features or bonus material. 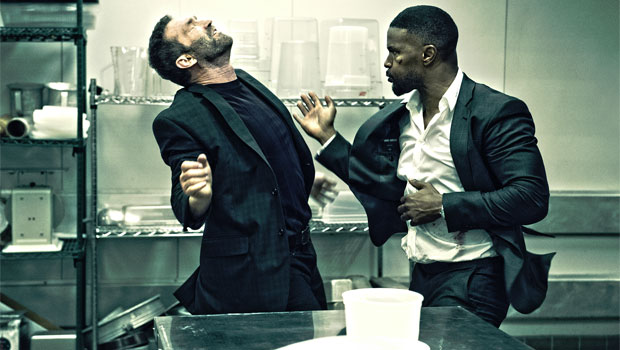 In Sleepless, Odar dumps plot, characters, setting, and even potential twists in what could best be described as an exposition vomit. This bankrupts all the film’s suspense surprise making Sleepless as predictable as losing to the house at blackjack. Vincent Downs, played by Foxx, is a corrupt Vegas cop. He and his partner Sean Cass, played by rapper T.I, hold up drug dealers at the start of the film. Downs is an undercover cop and he’s investigating Cass and the big drug syndicate he works for. Jennifer Bryant, played by Monaghan, is a hardnosed female cop from Internal Affairs who has a chip on her shoulder. Bryant and Downs face off at the scene of the shootout over evidence and establish their adversarial roles. Bryant’s partner, Doug Dennison – played by a scenery chewing David Harbour, glowers in the background. Scott McNairy is introduced as the psychopathic drug baron Rob Novak. Just in case the audience was running low on clichés, Downs is revealed to be estranged from his ex-wife and son. Downs’ son is then kidnapped by Novak. They want Downs to swap him for the stolen drugs. This breakneck exposition takes ten minutes, is convoluted, fails to develop any connection to the characters, and sucks the excitement of the plot.

To compound things, Sleepless’ cinematography and shooting jumps wildly between bland and confusing. The film is overly dark. When everything is not cast in so much shadow that you can’t see what is happening, Odar uses a washed-out, Nordic-noir palette. Astoundingly for a film set in Vegas there are no bright Vegas colours and saturated neons, even the casino floor is blue and grey. The whole setting of Vegas, which should be a supporting cast member in the back of every scene, is missing. The listless editing and camera work makes the action boring. Odar is overly reliant on jump cuts. While the action sequences occur at breakneck pace, they are edited together in jerky sequences reliant on static shots. The fight scene choreography is a poor imitation of post-Bourne and Bond action films. The action sequences are devoid of excitement and at no point are you concerned for Downs, his son, or Bryant. 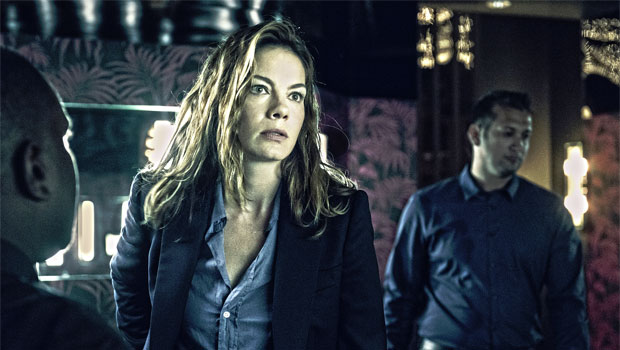 The sound design is particularly bad. There is no silence to build tension, instead there is an incessant beat and thrum throughout Sleepless. It attempts to imitate the ominous double bass and cello soundscapes made popular in films like Denis Villeneuve’s Sicario. But it rises to a string crescendo and returns to the bass beat in every scene and every action sequence. It is predictable, monotonous, and annoying and means the characters lack musical leitmotifs. On the positive side, Sleepless illustrates the importance of sound design by doing such an abysmal job.

A crime thriller should have tension and a plot with some engaging twists. Sleepless is a boring film that has neither. Instead, a great cast and reputable director are wasted on a cliché script with bad dialogue resulting in acting that is listless, stilted, and devoid of conviction. The editing and cinematography would be better placed in an average episode of Law and Order. The sound design and is appalling. Sleepless can’t even roll snake eyes.