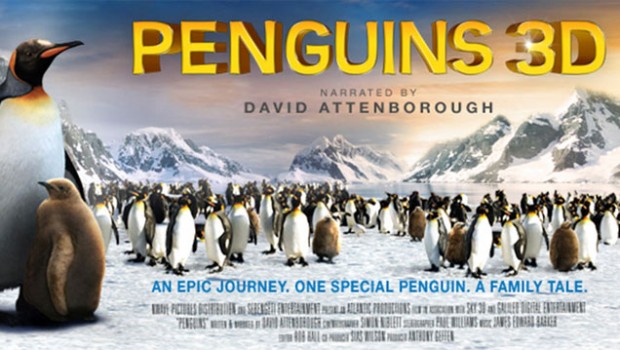 Summary: Penguin 3D is a very enjoyable documentary that really jumps out at you on the giant IMAX screen, especially with the inclusion of 3D.

David Attenborough returns as writer and narrator of Penguins 3D, a delightful documentary that takes the viewer on an amazing journey of the King Penguins who live on the island South Georgia near the Antarctica. This gigantic colony of penguins is dubbed Penguin City and boasts more than 500,000 penguins as they battle the challenges of this harsh environment, including predators. The documentary also follows a family of penguins that commences with a male penguin finding his mate after performing a ritual to woe a potential suitor. 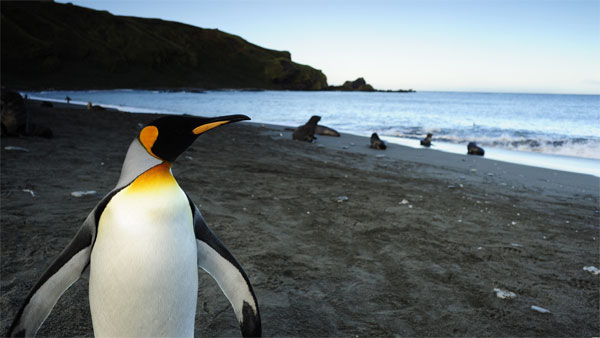 It is only together and through some amazing teamwork that they can successfully ensure the survival of their chick, especially with the freezing temperatures and deadly predators. As the documentary follows this penguin family, we learn that after birth, the mother heads out to sea to feed and bring back food to her yet to be hatched chick. While this occurs, the father stands over the egg in order to keep it warm and protect it from various predators who want a quick and easy snake. Once hatched, both the father and chick await for the mother to return.

It was quite fascinating to watch the parents of these penguins and seeing the chick turn into a young penguin was a beautiful sight. Unfortunately when this penguin gets bigger, it is up to both the mother and father to find food for it and as a result, it is left alone in the colony. Those penguins that did not mate for this season will guard the chicks, however there numbers are low and this is when the predators strike, especially the skua seabirds who try to feed on this young penguins.

Apart from the penguins, the creators of this documentary also inject some humour into the story with the gigantic elephant seals who not only love sunbaking but also releasing gas which is made quite evident with the sounds of flatulence. It’s quite an amusing scene and I for one would love to see a documentary about these large seals with their massive amount of blubber. The documentary also touches upon killer whales, leopard seals and the skua seabirds who hunt the kings and are shown as villains in this documentary, especially with the music and sound effects.

Penguin 3D is a very enjoyable documentary that really jumps out at you on the giant IMAX screen, especially with the inclusion of 3D. There’s some exceptional cinematography of the island South Georgia but the stars of this documentary are definitely the penguins themselves and with almost half a million of them calling this island home, it’s truly an amazing sight to see. The documentary gives the viewer enough information for them to be informed and more importantly, its creators successfully inject some human emotions into this amusing tale about the King Penguins.