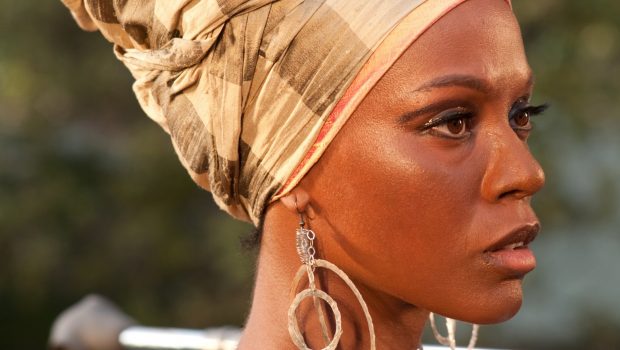 Summary: “Nina” is not fit to hold a candle to the late, great Nina Simone. The bio-pic hits a series of bum notes by failing to stay true to Simone’s true opinions and spirit.

If the late, great Nina Simone were alive she’d have a few things to say about her bio-pic, “Nina.” The film skips over a lot of crucial points in Simone’s life and instead focuses on her darker moments, her last decade when she was working with and under the tutelage of her assistant, Clifton Henderson. This leaves the story feeling incomplete and hollow and it is likely to leave viewers with more questions than answers.

Nina Simone was an outspoken, African-American woman, a talented and classically-trained pianist and a civil rights activist. The decision that writer and director, Cynthia Mort made to cast Zoe Saldana (an Afro-Latina woman of Dominican and Puerto-Rican descent) seems a tad strange. Saldana does her best with the material she is offered and she even sings in the film, but it’s asking a lot of the audience to suspend their disbelief in order to believe that Saldana sounds exactly like Simone.

Another hard thing for the audience to “buy” is how Saldana physically portrays Simone. In the film Saldana’s skin is darkened so that she exhibits Simone’s natural complexion but there are scenes where it is apparent that the actress is wearing heavy make-up. Saldana is also wearing a prosthetic nose. The film “The Graduate” springs to mind when you consider “Nina,” because Saldana was just 34 when she played this role and yet she is supposed to be playing a hard-drinking, sixty-something year old woman who is riddled with cancer. When you consider all of these issues together it is hard to believe that someone closer to Simone’s then-age and physical resemblance was not chosen for the lead role.

This film occasionally feels like “Love & Mercy” in that it covers a period when a musician battled their mental illness. But while the Brian Wilson bio-pic gives due credit to his creative period in The Beach Boys, in “Nina” Simone’s recording accomplishments are relegated to a short and fleeting montage. The film alludes to some of the prejudice she encountered (including the fact she was denied entry to the Curtis Institute and that she had to speak out in order for her parents to be admitted to her school concert in front of white townspeople) but a more dramatic and meaningful piece would have centred on these key moments and elaborated on them, especially when you consider the lyrics in Simone’s songs.

David Oyelowo (“Selma”) plays nothing more than a bit part here. He tries to make the most of things but you really don’t get a sense of who Simone’s assistant really is and why he chooses to have this job. The film shows the meeting between the singer and the assistant but it really doesn’t explain why he chooses to stay with the volatile artist, especially when his role seems to predominantly involve being a pimp, enabler and someone who is forced to endure Simone’s wrath.

This film hits a series of wrong notes and mis-beats despite the actors doing the best they can in the circumstances. The music in “Nina” may whet fans’ appetite for Simone’s music but the film will leave people with more questions than answers. Fans will be better off seeking out Simone’s original works or the documentary, “What Happened, Miss Simone?” a film that captures more of Simone’s essence in a trailer than in “Nina’s” whole 90 minute runtime.