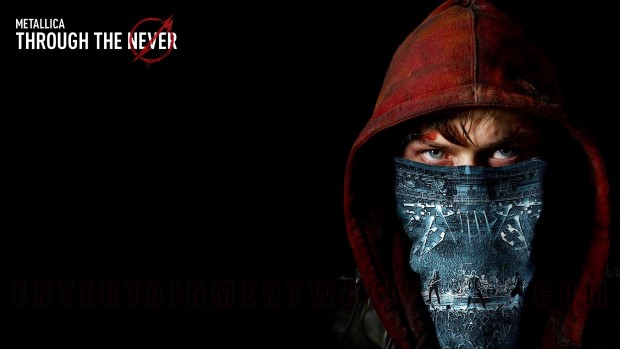 Metallica Through the Never DVD Review

Summary: Despite all the visual bells and whistles, though, what truly carries the film is the timeless quality of the set list.

Metallica Through the Never is an ambitious  hybrid of concert film and narrative sequences framing the live performances masterminded by the band themselves and brought to our screens by director Nimród Antal (Predators). Initially taking advantage of IMAX 3D in order to provide the most immersive concert experience possible, Metallica Through the Never is still an exceptional experience showcasing the highlights of the band’s thirty-odd year career that loses little of its impact though the transition to our home screens. 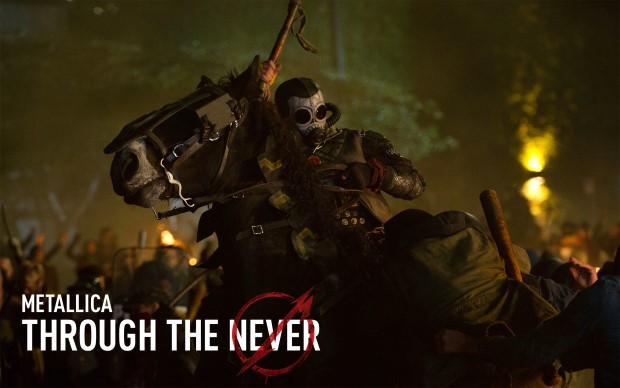 Firstly though it must be stated that this is first and foremost a concert film, with the narrative sequences acting as connective tissue between the hits, amounting to maybe 25% of the film’s overall run time; early trailers were kind of misleading in this respect, lending the impression that the story sequences would be much more prominent throughout.

This isn’t a bad thing, of course, as watching Metallica in concert is an awe inspiring experience in of itself, but fans should take note lest they come into this film with the expectation of a greater emphasis on the plot. 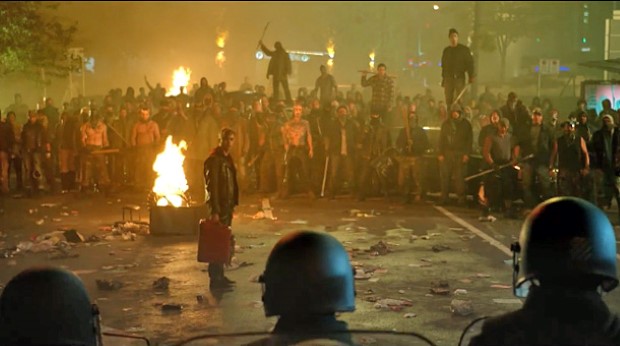 The storyline revolves around the surreal journey of Metallica roadie Trip, played  superbly by a silent Dane DeHaan (Chronicle), as he seeks out a broken down truck containing a mysterious package integral to the band’s show.

The film opens as Trip arrives at the stadium and makes his way through the backstage area, briefly encountering the band members (James Hetfield driving a hotted up car that shoots flames, Kirk complaining that his guitar is bleeding,  Rob Trujillo in his trademark crouching pose shaking the foundations with a chunky Bass solo and Lars… Well, Lars just gives Trip a death stare); once the arena fills up with the legions of Metallica fans and the band takes to their amazing custom built stage (Comprised of screens underfoot and with many spectacular song specific  set-pieces), Trip is pulled away from the show and sent out on his mission, plunging him into a nightmarish voyage that starts with a bloody handprint and a car crash before descending into the chaos of a fully fledged riot where an otherworldly masked rider casually lynches innocents before setting his sights on the unassuming Trip. 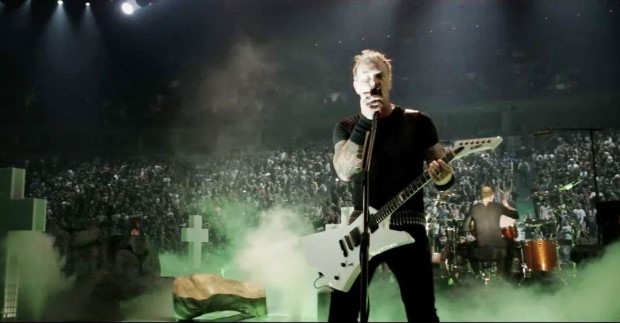 The best way to describe the narrative sequences is as a short horror film or extended film clip tangentially related to the music of Metallica, a macabre hallucinatory trip that evokes the themes of Metallica’s music and complements the live performance that’s integral to the film; however, whilst visually impressive and thematically sound for the most part, the ambiguous nature of the story may leave some fans wanting more… Which thankfully the film delivers in spades with the brilliant concert sequences.

Antal really goes the extra mile when directing the live sequences, utilising a set-up of 24 3D cameras and taking advantage of the laser shows and giant set pieces – An enormous electric chair descends from the ceiling, surrounded by Tesla coils, during “Ride the Lightning”; Elsewhere fluorescent crosses rise from the stage during “Master of Puppets”, blood seeps in across the screens from the edges of the stage, giant coffins suspend from the rafters displaying the panicked faces of those trapped within and the iconic Lady Justice statue from …And Justice for All is assembled and then spectacularly destroyed on stage… Make no mistake, Metallica Through the Never is truly a visual feast to behold and, quite simply, the best depiction of the Metallica experience one can come close to enjoying in the comfort of their own home. 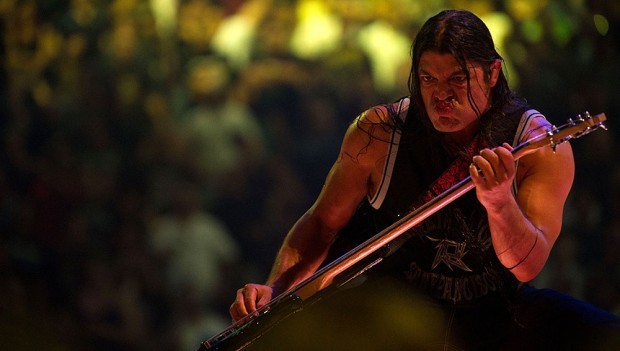 The Audio and Visual quality is superb for DVD and I can only imagine that both the Blu-ray and 3d versions look and sound even more astounding; audio is presented via a Dolby Digital 5.1 lossless soundtrack that sounds absolutely pristine through a surround sound set-up. I did notice, however, that without surround the sound can come off as a little too bass heavy and distorted when played through two speakers, so I definitely recommend using a good system to fully experience the setlist. 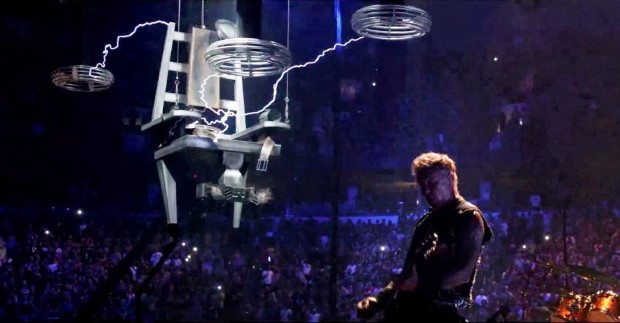 Metallica Through the Never is, unfortunately, rather slight on supplemental features, with only a brief look at the issues presented with capturing and mixing the live show and a short featurette where Antal, DeHaan and the band discuss the inception of the idea, the experiences of filming such a unique endeavour and the depth of emotion conveyed by DeHaan’s silent protagonist, relying only upon his mannerisms to inform the plot. Whilst interesting enough, the special features are too perfunctory for a release like this and are disappointing in their brevity. Also included is a film clip for “Master of Puppets” composed of scenes from the film, which, whilst showcasing a smashing live performance, comes off as superfluous due to its inclusion in the film already. 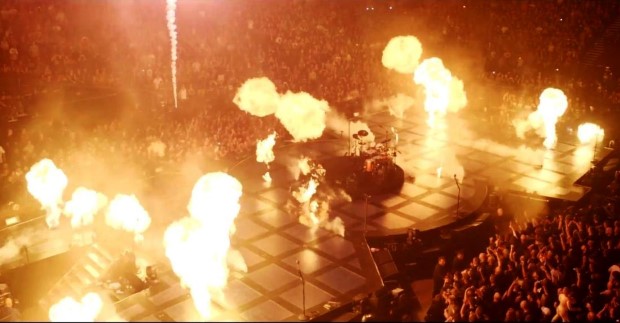 Metallica’s music is a take it or leave it proposition and how much enjoyment you’ll take from the film hinges on your opinion on the band. If you’re a steadfast fan then Metallica Through the Never is easily the next best thing to actually being at a Metallica show (I was fortunate enough to catch them when they headlined the Big Day Out in 2004 and can easily attest to how accurate the film comes to replicating the concert experience, especially with a decent surround sound system behind it), however those expecting an experience closer to that of an actual film may be disappointed as the (Admittedly) awesome concert sequences make up a bulk of the film.

Despite all the visual bells and whistles, though, what truly carries the film is the timeless quality of the set list, giving fans a heartfelt celebration of the band that helped form Metal into what it is today and one of the most exhilarating and immersive live shows ever caught on camera for posterity, resulting in a unique and inspired concert film experience that’s unparalleled  in terms of visual spectacular and creative use of the medium.

Recommended for every Metallica fan ever.