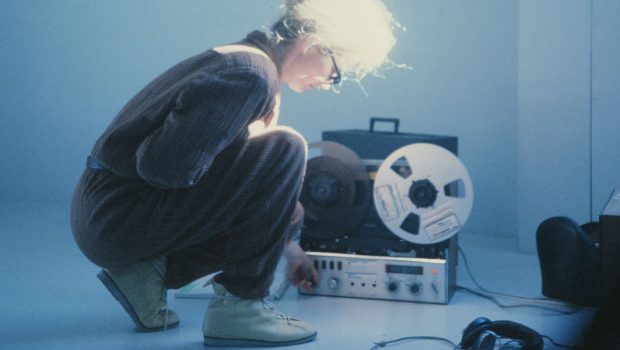 Summary: An interesting documentary but you will get more out of it if you are already a fan of this genre of music. Still well worth your time if you wanted to know more about the scene.

You can't play air with hammers

I had seen the documentary on Delia Derbyshire during a previous festival so I was interested in this one. There is a chiptunes music festival I was going to a few years back as that type of music is hard to find in Australia and everyone still knows each other as the scene is so small. I can remember TORIENA having her birthday cake on stage, it was so cute.

Laurie Anderson does do the narration but is really only there to link things together and make comments at certain points, most of the commentary is provided by the artists themselves from contemporary interviews and footage.

It starts off a lot earlier than I thought it would with Clara Rockmore, a classically trained violinist who ended up transitioning to playing the theremin with orchestras. There is even a demonstration of her getting someone from the audience to try it to show just how difficult it is to get something out of it.

Daphne Oram and Delia Derbyshire who were both involved with the BBC Radiophonic Workshop do have a good segment of their own. For those interest there is a documentary called the Delian Mode just about her. The sounds developed from needing a new type of music to go along with different writing that was being showcased after the second world war. I did like seeing all the old gear, tape machines and the visual composing system Daphne Oram developed by painting the notation on film.

There are many excellent quotes in this documentary that I am sure will pop up sampled in tracks in the future “imagine a time before samplers” being the most obvious one. Laurie Anderson’s lines are brilliant and seem to pop up at the right time.

A lot of the pioneering electronic artists hung out in the arts scene but the music was not generally accepted on record labels and the like. Advertising was one exception as they were always looking for something different that people would remember so it was featured a lot.

For fans of electronic music there are a lot of artists in this documentary that you will want to follow up. I do have some interest in computer music but did not know the in-depth stuff that was talked about here. I do agree with Pauline Oliveros’ view that we should stop calling people “Lady composers” and just enjoy the music.

A lot of the music still sounds original and not like anything else today and in some cases it was first composed in the 1950s. The entire point seems to get away from natural sounds in the same way as contemporary visual art developed when photography became popular as there was less reason to do an exact representation of something so you can explore other ways of seeing it or in this case hearing.

I will recommend this movie to my friends who perform music and also those I know who go see it a lot. This documentary screened as part of the music on film stream of the festival and was a great choice for it, I might not have been able to see it otherwise.

Don’t be scared off by the feminist angle, it is mentioned but it is not the main point of the movie. A great informative documentary and look into an area of music that does not get the same coverage as normal types of music performance in general.