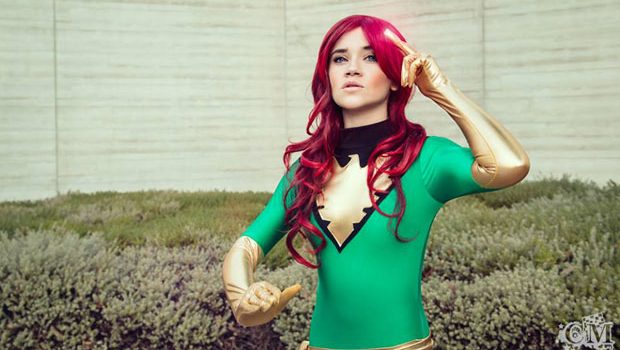 Impulse Gamer recently caught up with the beautiful, talented and self-confessed geek girl Lucie Bee about cosplay, gaming, working in the sex industry and her role at this year’s Sexpo!

Welcome to Impulse Gamer Lucie! So tell us how you became involved in Sexpo? 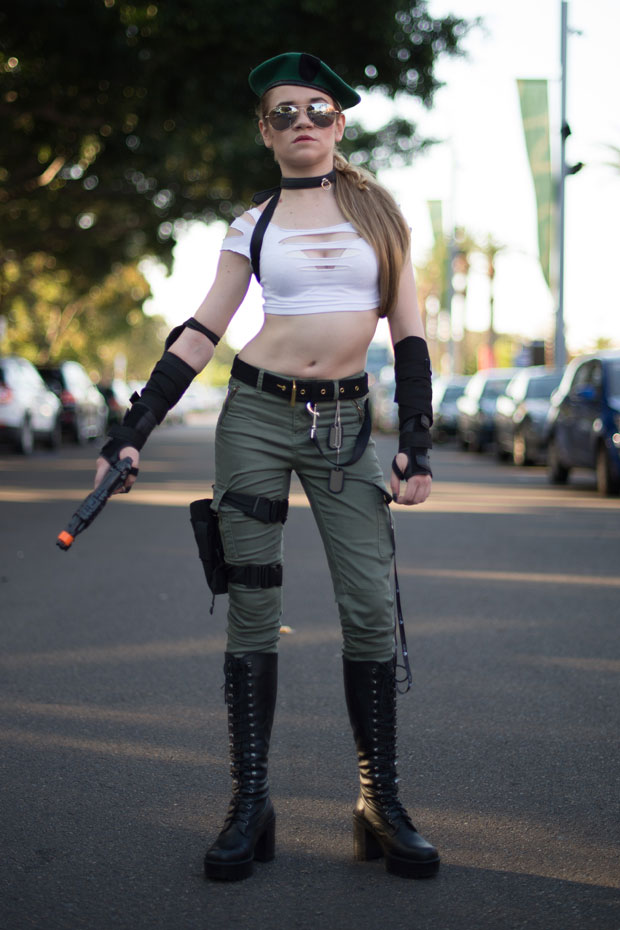 What do you think about sex in games and the negative stereotypes that it brings?

I’ve been to conventions before like PAX [AUS] and also ran panels before about sex in games and also the conversation about “geeks and sex”. Some people think that geeks still sit in the basement in the dark and doing nothing but playing hours of World of Warcraft which isn’t true… it’s a bad stereotype. I think there’s been a huge development of sex and sexuality in games and it’s stupid to think that gamers are not influenced by that or not into it. 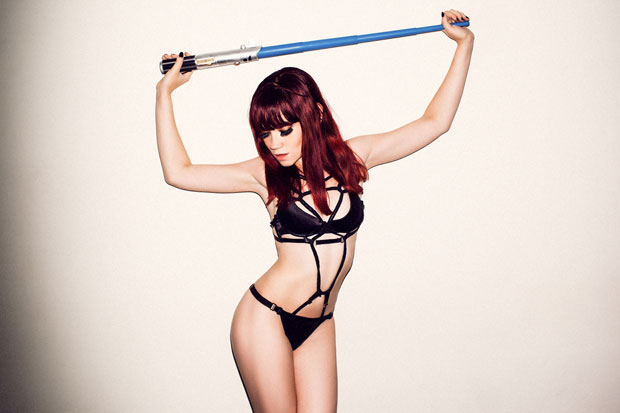 So how will cosplay at Sexpo be different than other family-friendly conventions?

With Sexpo, I guess we’re having a sassier approach to cosplay. When you go to places like PAX, you’re given a bit more freedom in what you can wear but if you go to Supanova or Comic-con, you can still have heaps of fun but there’s a limit as to how far you can go. That’s because these are family events and there’s an unspoken rule where most people respect that because you don’t necessarily want to be worrying about a parent coming down on you as you’re wearing something a bit too risqué <laugh>.

But with Sexpo, it’s going to allow people to really let go and dress up as however they want, whether that’s all covered up or non-covered up. It’s also going for cosplay characters that embrace and scream sex appeal in order for cosplayers to have some fun with it.

The competition is also very diverse as we’re not just picking certain people or restricting it to specific genders or just a bunch of chicks on stage with Victoria Secrets style outfits. It’s going to be people dressing up in outfits they love and characters they feel great about. So being able to show off, share their fantasies, be really open and embrace their own sexuality in a crowd of people who really respect that is very special. 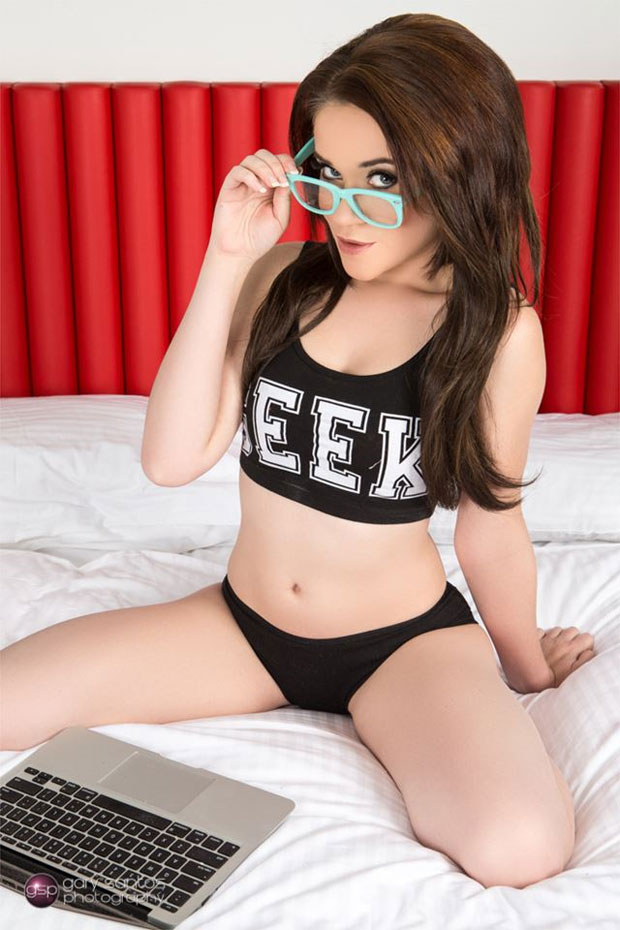 At family conventions, there’s been some negativity about cosplayers being harassed or touched inappropriately, what are your thoughts on this?

I think a lot of people really worry and as I’m online a lot, I’ve read comments about people saying that cosplayers will be bothered by others at Sexpo by being really rude and harassing them. I’ve been at 3 or 4 Sexpo’s now and wearing barely anything <laugh> and I’ve always had a great time. I know that I’m not everyone’s cup of tea either as a pornstar or member of the adult community but I do have a fanbase and audience who really like what I do but there’s also some people who want to say a few stupid things in public.

Thankfully Sexpo take care of that stuff really quickly if someone is bothering people, they don’t get to stay for too long because the whole idea of Sexpo is to create a really safe, enjoyable and fun environment for people to get sexy. Whether that’s buying toys or in this case dressing up. Also, people have been dressing up at Sexpo for years like women wearing their corset and jeans. Everyone dresses up a little anyway so I just think this is a really good and cool inclusive way to continue on with that tradition. 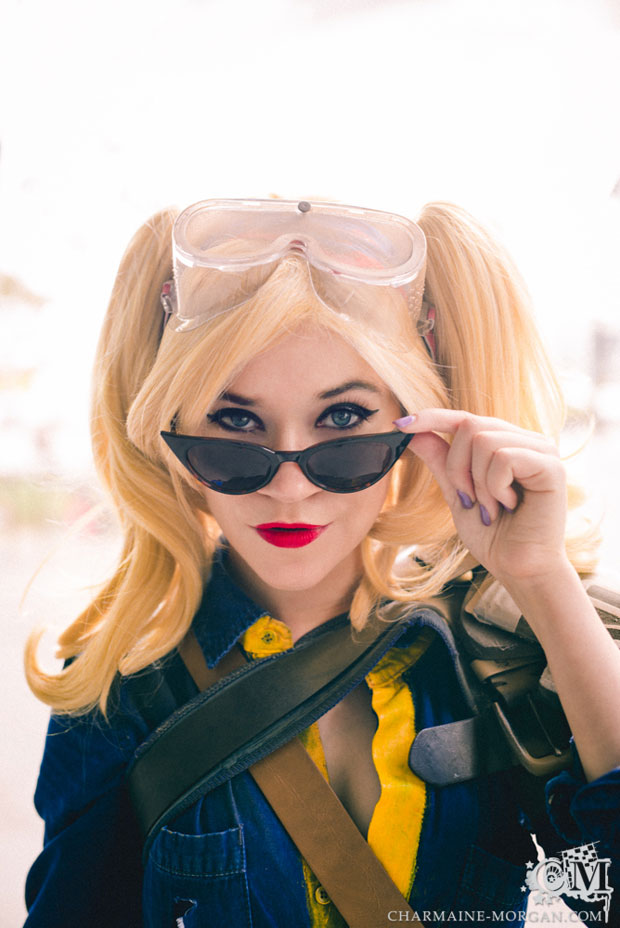 So where do you come in with the cosplay at Sexpo Lucie?

I’ll be hosting and judging the cosplay competitions. There are four heats and a final. The first heats will be at 2pm and 7pm on Friday and Saturday. I’ll also be doing a geeky themed show before each heat and I’m keeping the themes of both those shows a closely guarded secret but they will be in cosplay. You’ll then be able to see the final on Sunday and we’re still confirming details for that and I’ll also be doing a show before that also in cosplay. When I’m not hosting, judging or cosplaying, I’ll be in booths throughout the four days of Sexpo.

I know you said it’s a closely guarded secret but any hints Lucie?

I’m actually out today shopping for cosplays and we’re just putting the final bits and pieces together but I will give you some clues. Most of my cosplays on the weekend will be gaming related and at least one from a classic cartoon that I’m a big fan of. I’ll also be choosing some kick ass female characters that I love and have some fairly scantily clad outfits that I think will fit right in for the rest of the shows. I have a lot of outfits and currently working on 6 of them. 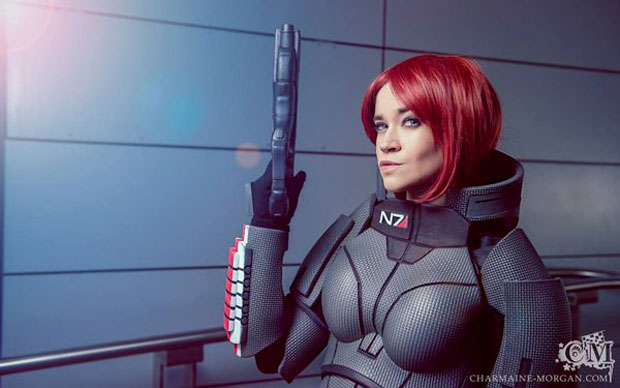 So how did you get involved in the sex industry?

I was living in good old Canberra <laugh> and was working in admin, pretty much doing what everyone in Canberra does. I left my day job so to speak and when I wasn’t doing that, I was working in book stores as this mild mannered book store attendant with glasses, a messy bun and wearing pants and shirts, recommending books to grandpas <laugh>. 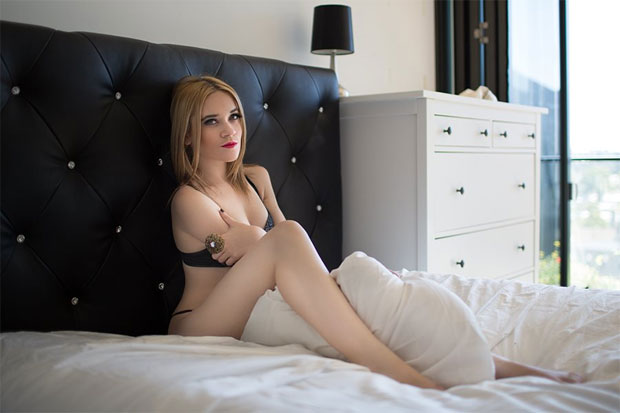 So how did you merge cosplay with sex?

So I’m guessing you also combine cosplay with escorting?

Absolutely and I have a few old favourites. I get Catwoman a lot because her outfit is barely there <laugh> and she’s also a badass and a bit edgy. This allows me to be more sexy and kinky which I love. However my favourite character is Phoenix who is Jean Grey from the X-men and I get asked to dress up as her quite often because guys really know that I love it.

The first cosplay that I ever did which I haven’t dusted off in a while was Moxxie from Borderlands and I’ve got a replica of Moxxie’s bad touch, the gun which I’ve recently been asked to pull that out of the closet again. So maybe I’ll have that one for a convention soon <laugh>. 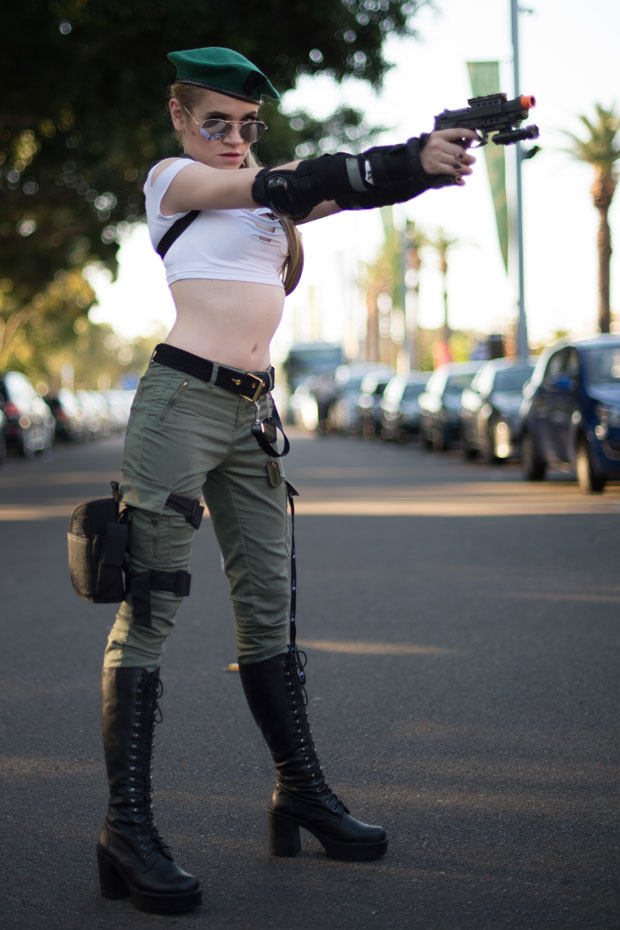 You also offer filming with clients? 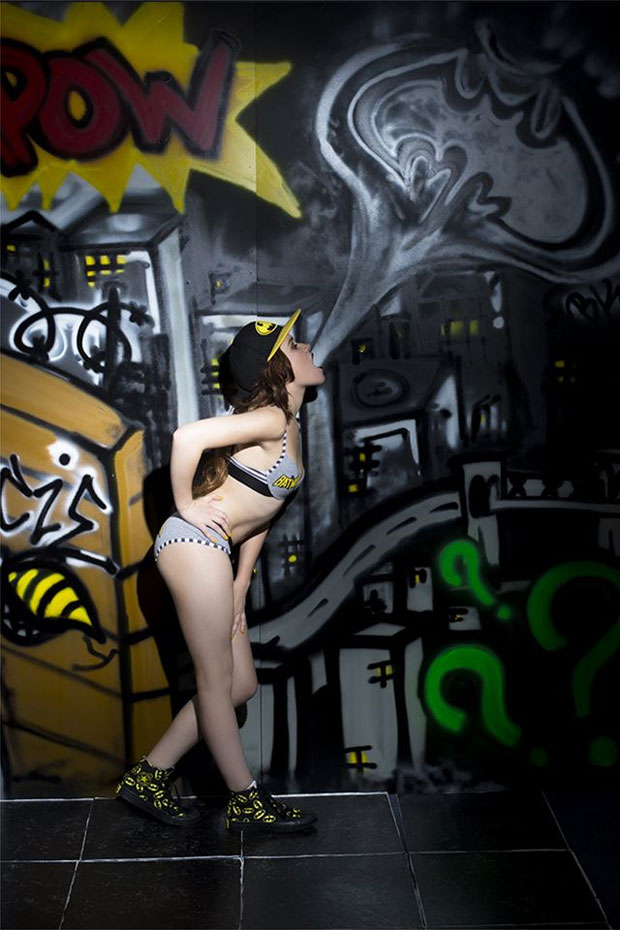 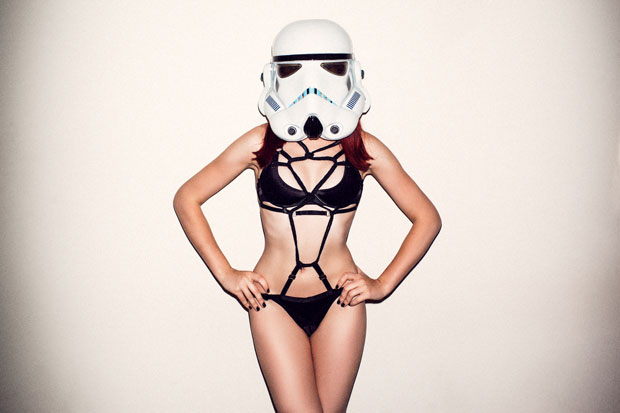 Do you see many gamer clients?

I’m seeing a lot more guys who are shy and they’re also gamer guys and geeky guys. Unfortunately because of those stupid stereotypes about people enjoying these pastimes, some haven’t had the chance to get out there and really explore their own sexuality. So I’m getting a lot of those guys coming to see me who can explore that also enjoy getting their asses kicked at Mortal Kombat <laugh> at the same time which is fantastic. I love being able to combine the two and I like that people can come to me and have a really safe environment with all that kind of stuff. 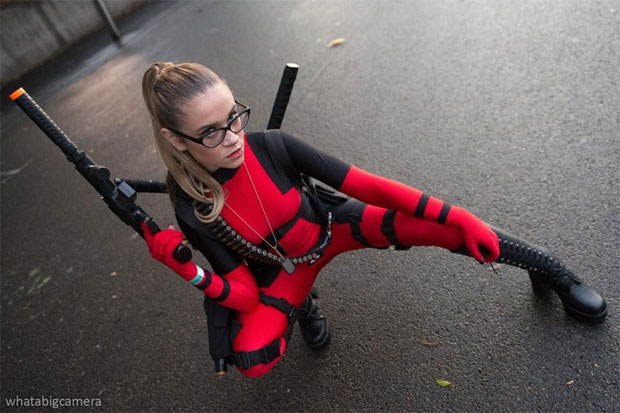 You’ve mentioned Catwoman and Marvel Lucie… so are you a DC or Marvel fangirl?

Ohhhh… I have to say that because I love Phoenix and the Dark Phoenix which are my life <laugh>, I’m a Marvel girl but I’m also excited for the Suicide Squad and I may possibly at Sexpo have a Suicide Squad Harley Quinn cosplay in the works! I’m really thrilled at the movie but it hasn’t turned me fully to DC but I may definitely be on the way. 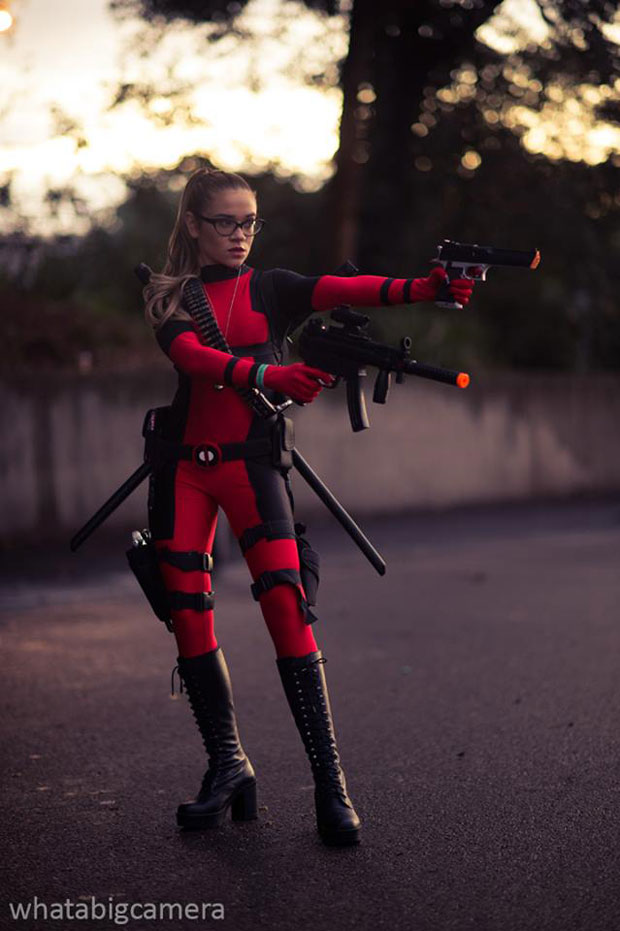 Finally Lucie… what are you playing at the moment on your PS4?

I’m trying to finish The Witcher 3 and is that not terrible? I got distracted with Fallout and did a Fallout cosplay at PAX [AUS] last year that I built myself. Fallout was an all-consuming force in my life and I even got the Pip Boy Edition and spent a lot of time on that game. I’m now I’m trying to complete The Witcher 3 which I didn’t finish.

That’s all going to stop as well because I can’t take my PS4 to Sexpo because Doom comes out that week and I won’t get anything done. There will be no shows or cosplay judging if I’m allowed to play Doom <laugh> because I’m really looking forward to that. I’m also going to be playing the open-BETA to that over the next few days so I probably won’t be heard from for a few days! <laugh> 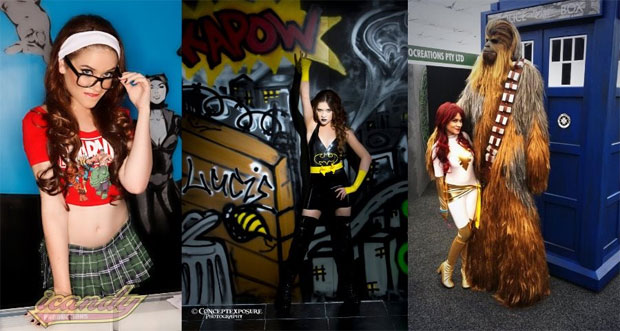