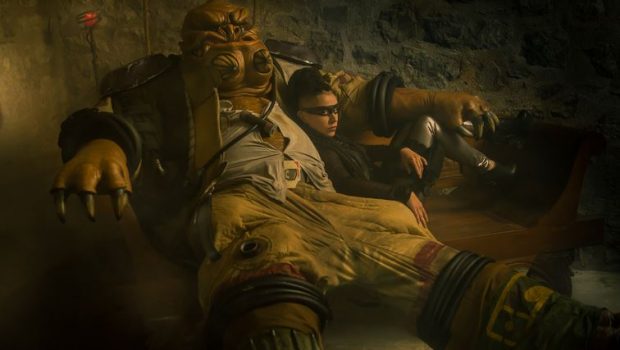 We catch-up with Julian Checkley from Order 66 Creatures and Effects who has helped created some of the world’s most amazing costumes and cosplays with one of his recent designs being that of Star Wars The Force Awakens Grummgar!

What drew you to creating amazing characters?

I spent 20 years in the film industry, starting out as a polystyrene sculptor and moved through various jobs. I was scenic painter, make-up artist, prop maker, SFX technician and even an art director.

But I found i always gravitated back to creature effects. This is basically a generic term for a very wide field of skills that are need to create monsters or ‘creatures’ for film and TV. With all my previous experience in my previous jobs it lent itself perfectly for making monsters.

I moved to Ireland with my wife to start our own business but i still kept may hand in taking on the odd film job. Since then we have seen a huge increase in private commissions and private individuals who just want that extra special something for there own collection.

I still make things for myself when i get the chance, usually for a promotional photoshoot but I must say I find it incredibly enjoyable playing dress up once in a while. 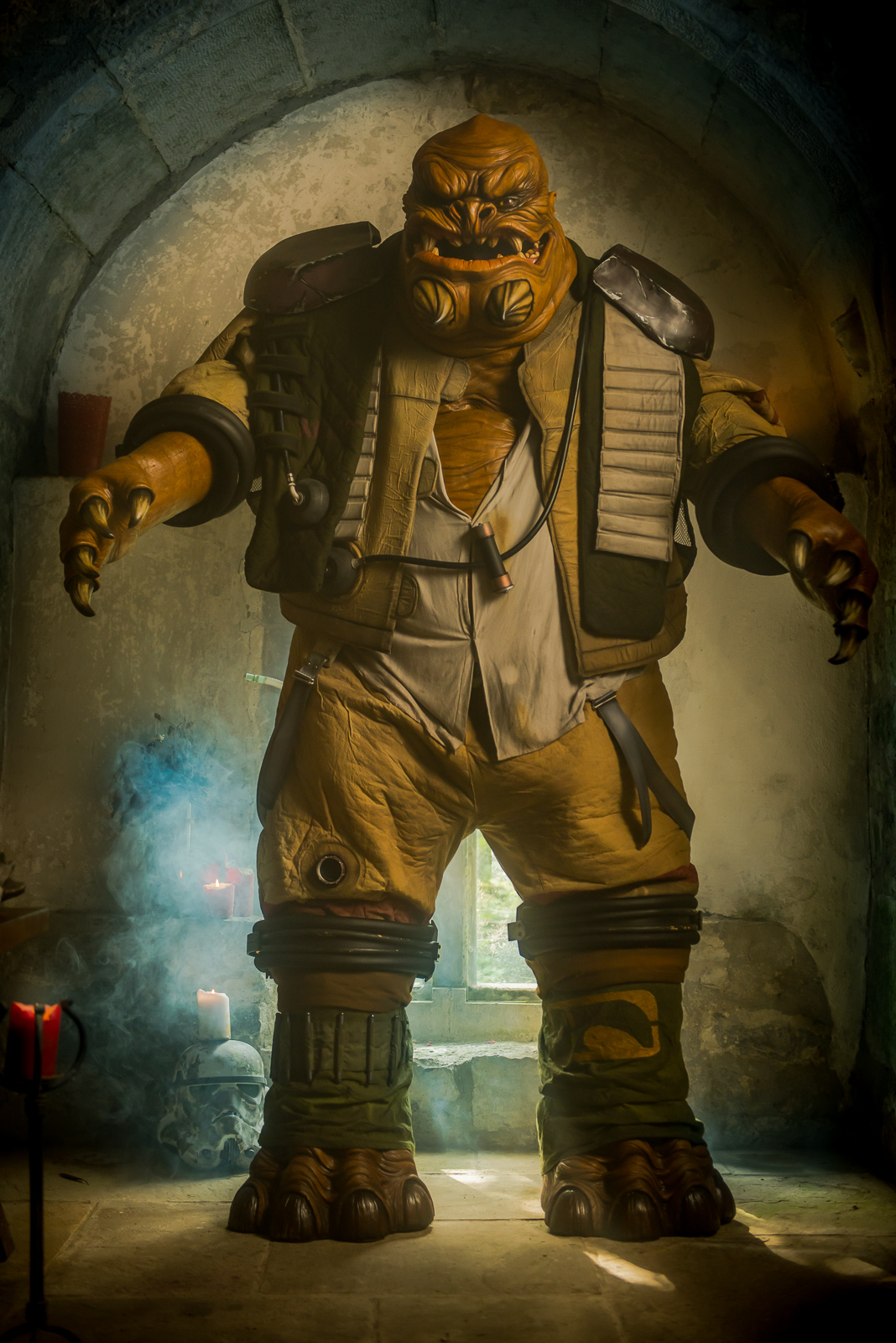 What’s been your biggest challenge so far?

I would have to say it was making a load of additions for the Batsuit.

It was for a project that we can’t say anything about just yet. Don’t worry the big reveal will be in the next few weeks so you’ll get to hear a lot more about it all then. All I can say is that we had a very limited time to get all these things working, fitted fitted onto the Batsuit and filmed.

Lots of head scratching and late nights but again immensely rewarding when we had it in the can. Just hope everyone enjoys the results! 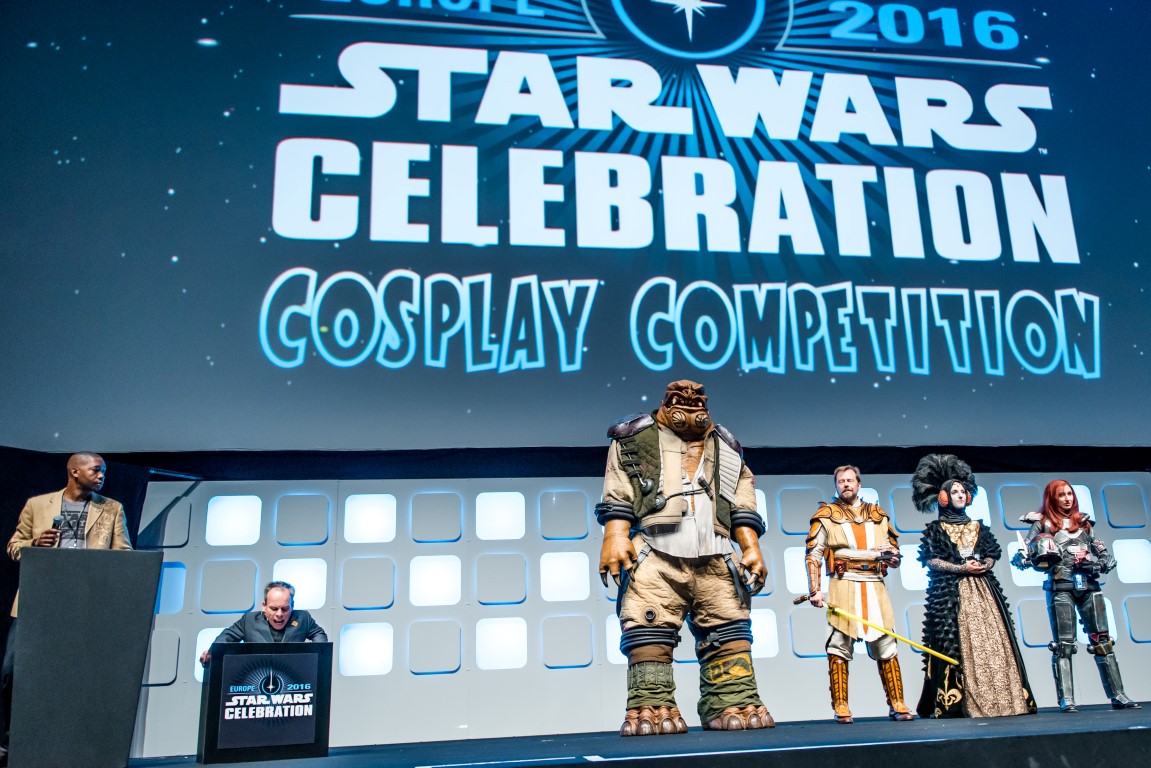 Although the Batsuit additions were enjoyable to create I think it would have to be winning the coveted prize of ‘Best in Show’ at Star Wars Celebration Europe 2016 in London takes the biscuit.

I’ve been going to the Star wars Celebration events for years and seeing the massive appreciation of the fans is incredible.Its like being part of one big family and they are all routing for you.

I remember going back to my hotel room, exhausted and drained but absolutely on a high from getting such an accolade from my peers. 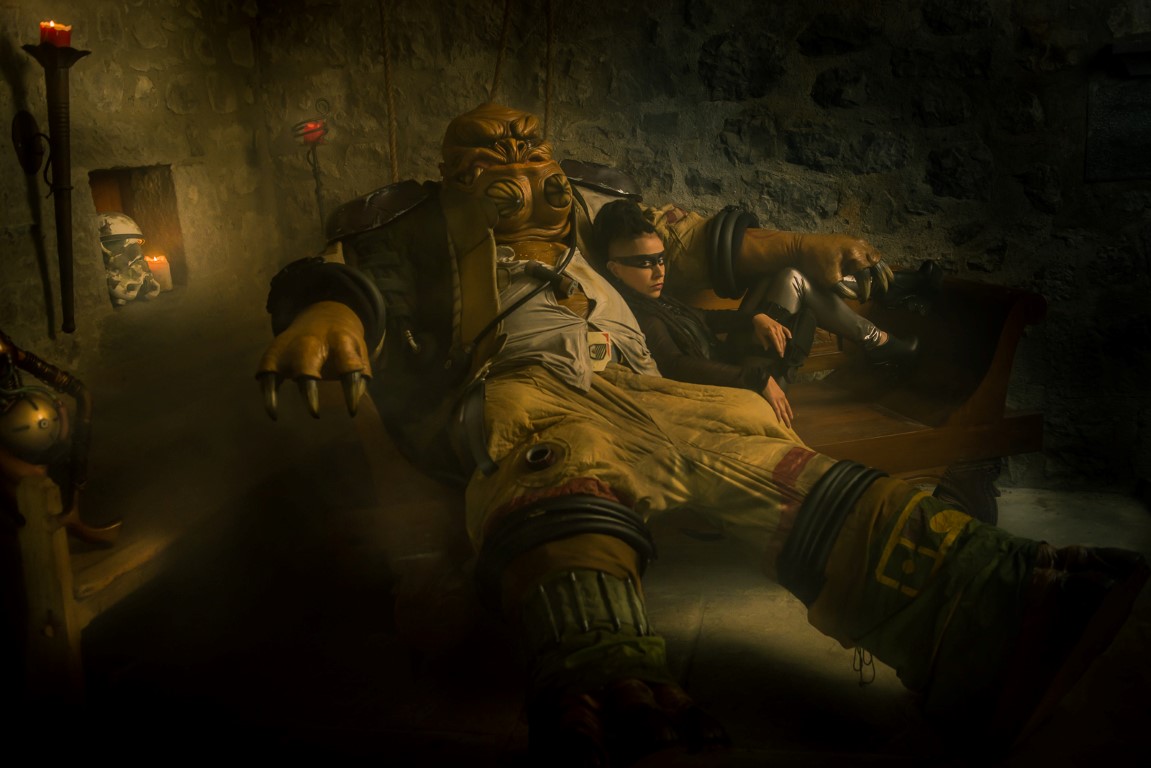 As a creator, what inspires you?

The usual things like, film, TV, comic books, video games have all been great resources to inspire. Lately though I’ve found i’ve been blown away by the incredible talent of independent artists and sculptors.

Just scrolling through Instagram you’ll witness a flood of incredible design that i find myself getting lost in. The technology available to the man in the street today has opened up endless possibilities with design, sculpting and creature creation. 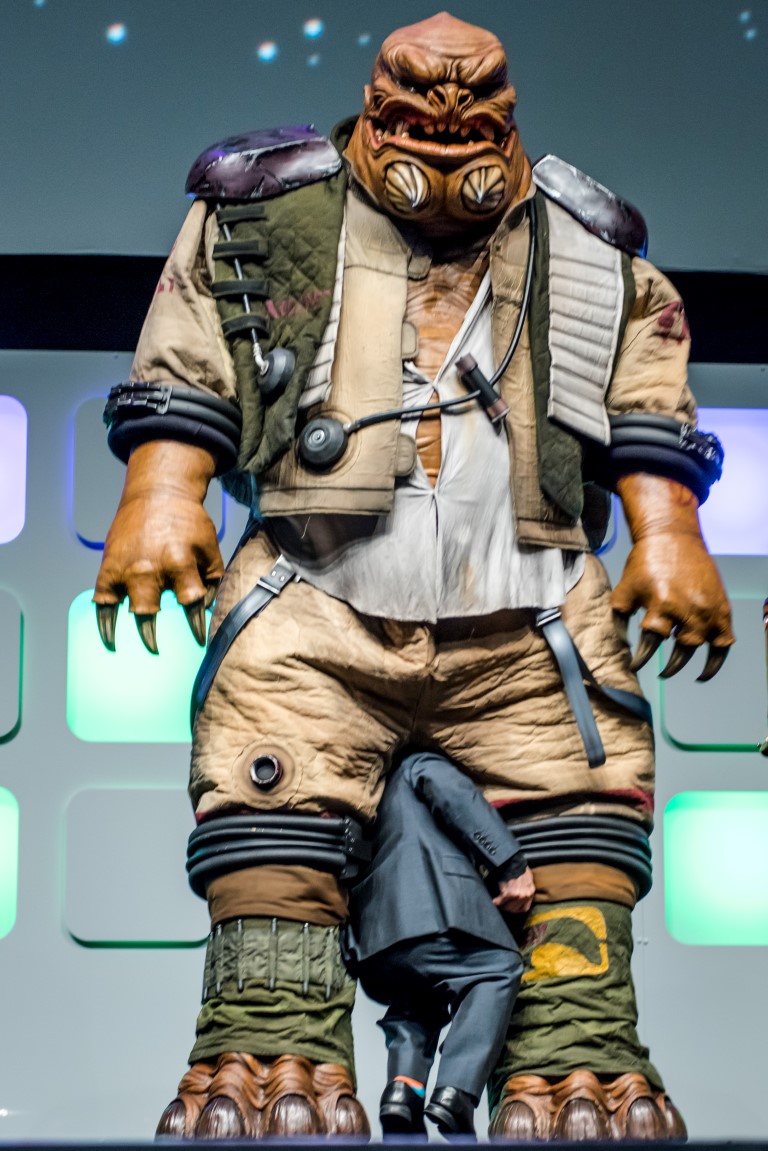 Can you walk us through your design process?

When we decide on a character to create for a promo shoot we will try and identify one that has the ‘WOW’ factor. We could pick any costume and re-create it to a movie quality standard but if it doesn’t have that magical ‘wow’ factor it won’t make people stop and remember it.

Sure there are some fantastic Kylo Rens out there but its not really a costume that will stop you in your tracks if you saw it walking towards you. 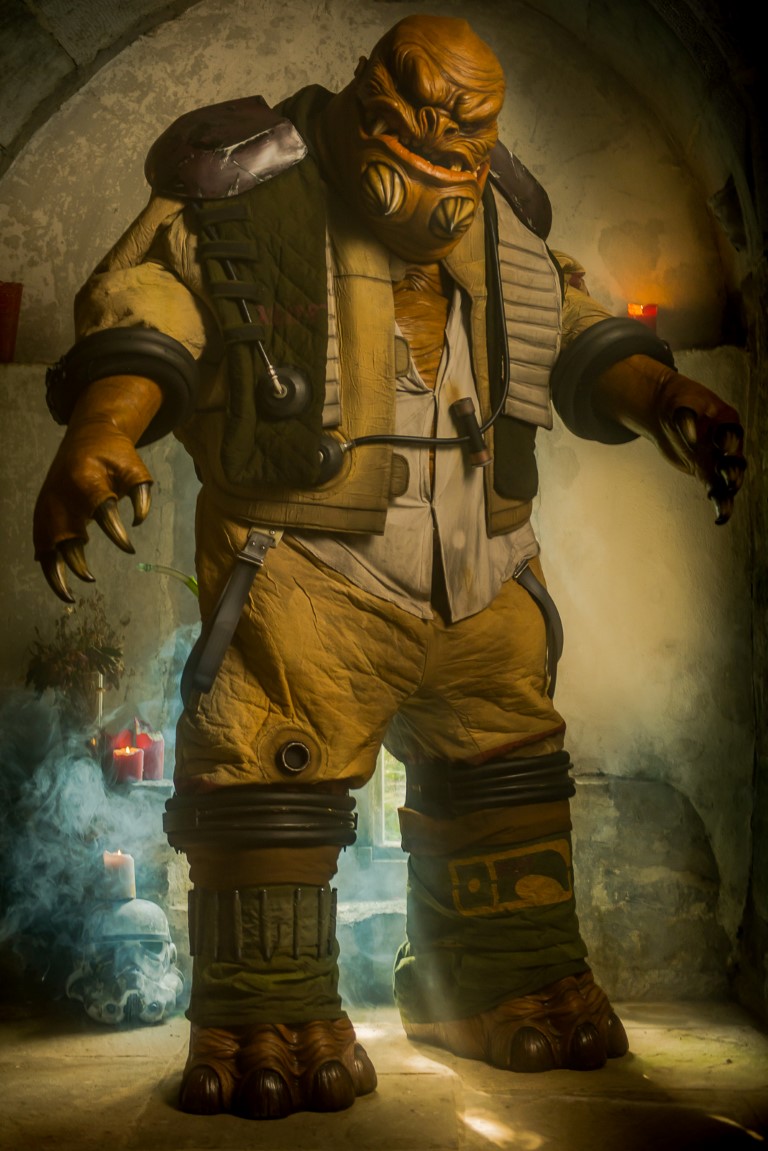 What’s been the most expensive costume you’ve created privately and what was it?

The most expensive one I made for myself was probably a Revenge of the Sith Darth Vader. I really went to town on that one, everything was immaculate and the very best quality i could source. The helmet alone took me 18 months to finish from scratch.

Grummgar would be up there too, mainly just down to the sheer quantity of materials needed to make something on that scale. I think I spent nearly €1000 on materials just getting the feet to look right.

Tell us EVERYTHING about your awesome Grummgar costume and the photoshoot?

Initially I wasn’t going to build a costume for Star Wars Celebration Europe, i was just going to go there and enjoy myself without the binds of a costume. Plus I wasn’t massively inspired by any of the new Starwars characters. Normally I’d choose to costume a bad guy or some antihero.

It wasn’t until I spotted Grummgar sitting there when an excited friend texted me announcing, “Only 100 days to go until Celebration!!” Thats when i just decided to go for it!

Ok, so Grummgar is this big game hunter we see in Maz Kananta’s castle in The Force Awakens. Blink and you’ll miss him which is pretty hard considering he’s 9′ (2.70m) tall but he is only seen sitting, draped with sexy First Order spy Bazine Natal.

Neil Scanlan’s crew created him as a seated puppet operated by a few guys. In hindsight i can now see why they decided to go down that route. As i mentioned previously the scale of this creature required huge amounts of materials to create.

With all these materials also comes huge ballast, with the whole costume weighing in at around 150lbs (70KG). The 100 days that it took to create it was also spent in the gym so that i could move around in the costume.

It is immensely cumbersome and roasting hot to wear so any conditioning I could do to help with the performance was essential. Adding to the weight was the articulated hand extensions, the specially adapted stilts and a real-time voice changer allowing me to grunt and growl like Grummgar.

The jaw also articulates by nodding my head inside the mask where I have very limited vision through the mouth. With training and practise I was able to walk around unaided and bring Grummgar to life somewhat. Due to his vast size I had some help on a few elements of the costume.

Kamil Krawczak who is also our amazingly gifted in-house photographer got stuck in helping to make the articulated hands and Mary Mundy our go to gal for any soft fabric parts worked with me creating Grummgars flight suit. They were both a welcome comfort as the clock was ticking.

With the suit complete and a day to spare we packed Grummgar into the back of my truck and set off for London. We were up against some incredible costumes in the competition but in the end we too home the best over all costume at Star Wars Celebration prize winning the ‘Best in Show’ trophy.

Back in Ireland we set about finding a suitable location for Grummgar’s promo shoot.

Fortunately our workshop is based on the west coast of Ireland, only a short distance from the location shoots for The Force Awakens. so, it was no surprise that we were lucky enough to find the perfect stand in for Maz Kanata’s castle. Built in 1460 the beautiful Dunsandle Castle in Loughrea was used.

Set in secluded woodland the castle is currently under restoration so getting all the crew and a costume that big up 5 stories through a tiny spiral stone staircase was quite a feat.

We didn’t want to exactly recreate Maz’s watering hole but just riff on it with a similar look and instead of Bazine, this time Grummgar had one of his other girlfriends at hand.

Once we were in costume and all set up it was left in the very capable hands of Kamil our photographer, snapping over 800 pics in 40 minutes. Its great having a photographer who’s sympathetic to a person in costume, especially one this awkward.

Kamil has been the master of all our most popular costume shoots over the years and I think he has worked his magic once again on the Grummgar shoot. 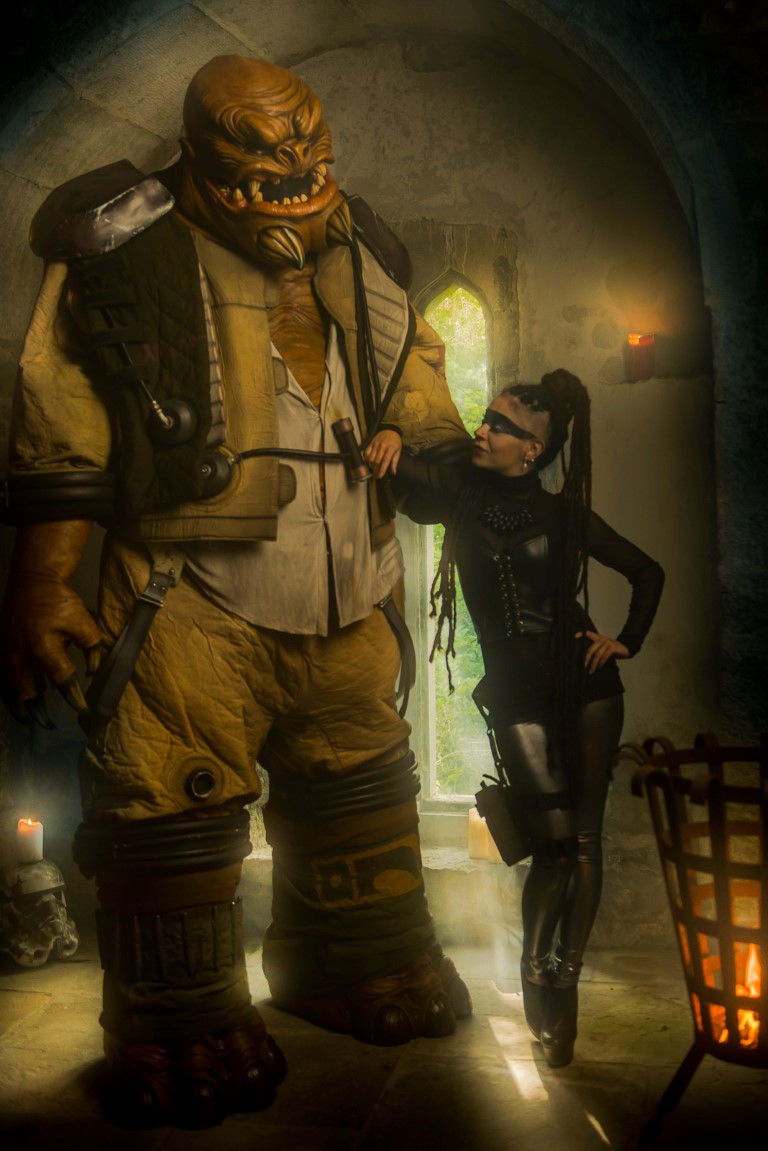 Technically Grummgar as a costume wasn’t that hard to produce. The techniques would be no different from creating an Admiral Ackbar costume, only scaled up considerably, wearing it on the other hand…! 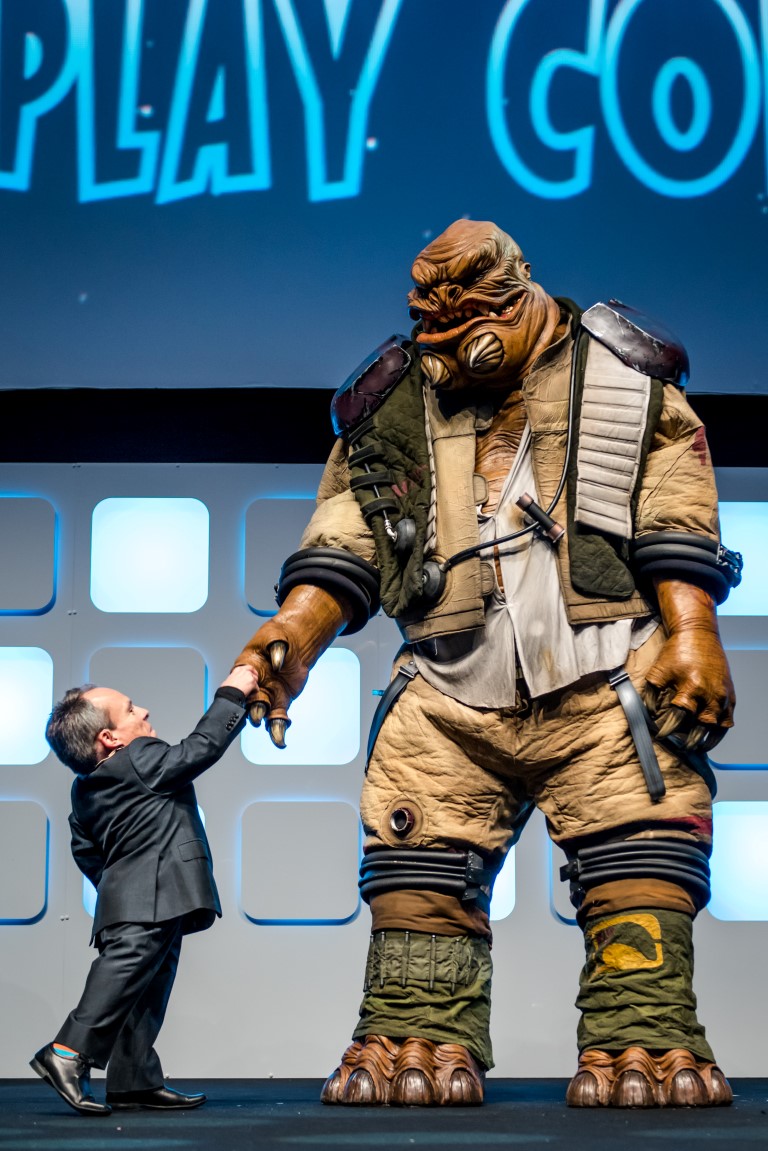 Batman was one of those shoots that just captured the zeitgeist at the time. Everyone was jumping on the 3D printing thing and as the armoured parts were created using this technique the press just jumped on it. I must give credit to the guys that made those parts, Kevin Leblanc and Clinton Hoines both

based in Canada, did an incredible job. All we had to do was design an undercut to mount everything to, paint it and add a few upgrades.

The shoot for the Batsuit we did guerrilla style, gaining access to some rooftops in Galway city at 11pm we just shot what we could. Just don’t inningtry this at home kids, running along rooftops in the dead of night in a Batsuit is not for the faint hearted. I was terrified!

Since then we’ve been making those few additions that I mentioned earlier for an exciting project that will be announced in the next few weeks. Its something that will be a great bit of fun. Batman fans will love it. 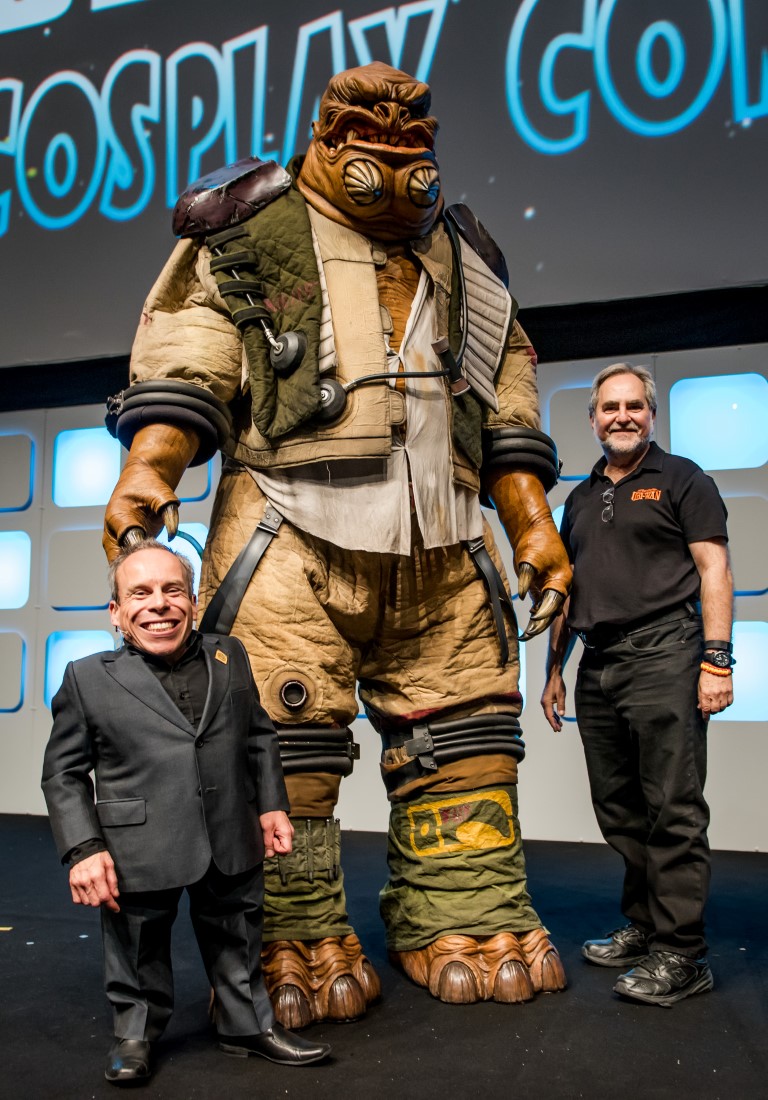 There are a few things in the pipeline for private customers that I can’t say much about for privacy reasons but for myself I have one thats been on the long finger for a while now. I actually started it a few years ago, just doing a bit when I wasn’t working on other commissions.

It’s the concept version of Cyborg Darth Maul, similar to the one most people would be familiar with seeing in The Clone Wars. He’s basically Darth Maul after he survived being cut in half by Obi-Wan Kenobi in The Phantom Menace.

But now he’s older, angrier and beefed up sporting cybernetic ‘chicken’ legs. The costume is about 40% done so just a big push would see it completed. We even have the photoshoot all planned out, so watch this space! 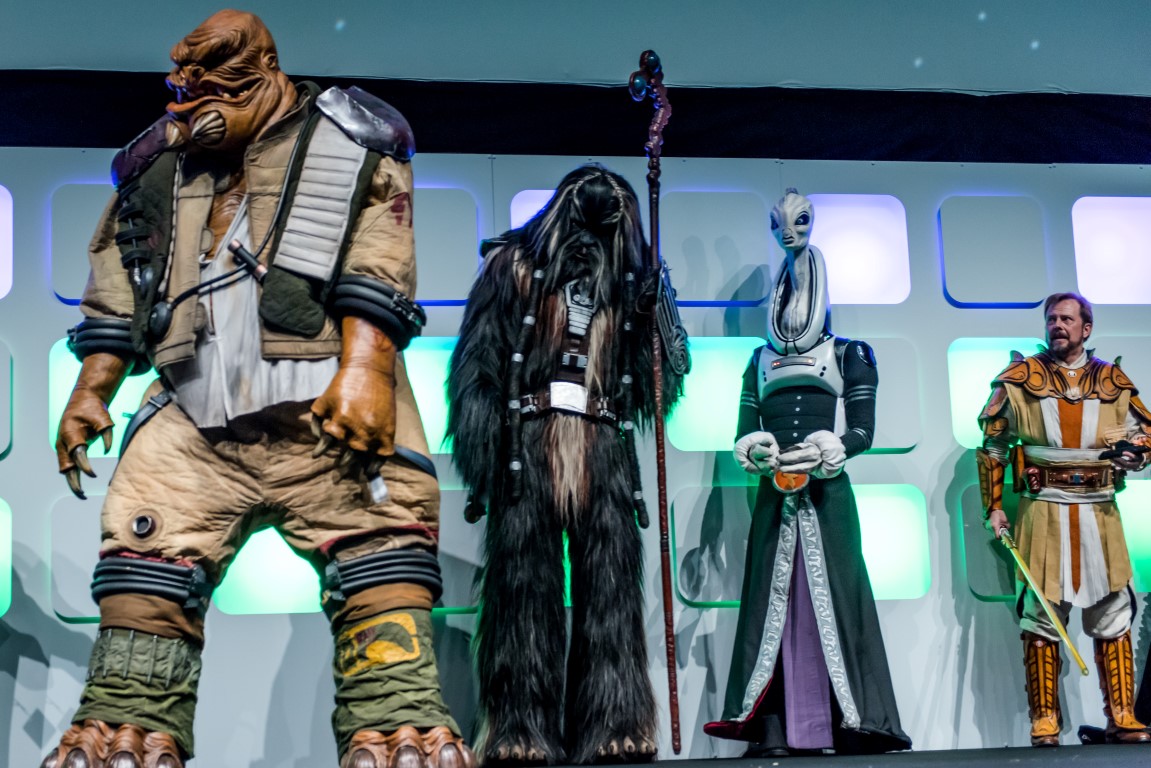 11.   Lastly, if you had unlimited time and money, which character would you create?

If you had asked me this a few years ago I would have said Sauron from the Lord of the Rings but today I think there has been too many good versions of that done now. I think I’m just going to hold out to wait and see what characters are offered up in the new Star Wars movie instalments.

What ever it is it will have to be one with a big ‘WOW’ factor.