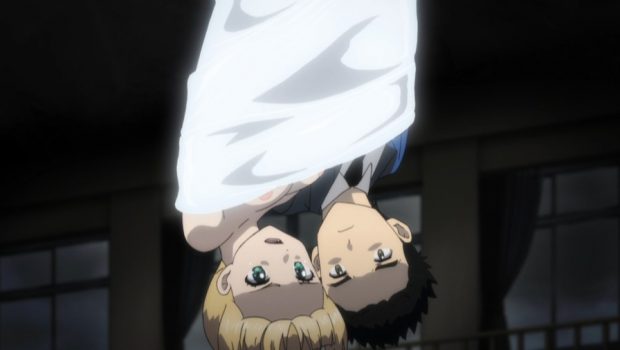 ‘Strong themes, animated violence, sexual references and frequent animated nudity.’  Thus spaketh the classification box on the cover of Madman’s new release of the Isuca anime series, and I have to say it spaketh true.

From its opening scene, in which a naked woman morphs into a gigantic alien centipede and attempts to devour the brains of an adolescent schoolboy, Isuca doesn’t fail to in its attempt to provide the most enjoyably outré anime this side of Assassination Classroom.  Yes, it occasionally gets a mite smutty, as in every few minutes, but thankfully strikes a surprisingly deft balance between sex, violence and story, and overall comprises a lucid and highly enjoyable (if sexily violent) 11-part series.

The tale revolves around nubile spirit hunter Shimuzu, charged with hunting down ‘specters’ – multidimensional shapeshifting demons who feed off the life force of humans. Together with Shinichiro, the aforementioned hapless schoolboy, the two must do battle with an ancient evil and yadda yadda.  Yes, it’s a trope with dates back to the Gnostics and the Sumerians before them, but the genius writers of Isuca have come up with a clever twist: nudity, and plenty of it.  In fact many of the series’ more action-dense sequences were enlivened by the ‘will she or won’t she be able to keep her clothes on for the duration of this fight sequence’ angle (Hint: the answer was usually no).

In episode 5 Shimuzu is cocooned in the web of a giant spider, the acidic nature of which promptly eats away at the fabric of her clothes whilst leaving Shinichiro unscathed, his uniform evidently being composed of a more durable textile.  Fan service at its finest!  You get the idea.  It’s quite dark, rather fun, a little bit twisted and a lively undercurrent of sex pervades throughout.  What’s not to like?

It has its critics, but I was genuinely taken with Isuca.  From a technical standpoint the series doesn’t disappoint either.  The animation is remarkably accomplished – quite spectacular actually, as good as any anime has ever looked on DVD – with plenty of subtle gradation and an impeccable, painterly use of lighting throughout.  The 2-channel Japanese audio is crisp and whistle-clean, as is the 16:9 transfer.  It’s good stuff all round, though those who prefer to watch their anime in English, assuming any exist, will need to overcome their predilections here – Japanese audio only.  A couple more bonus features might’ve been nice, but there’s more than enough on this 2-disc set to compensate.  Top notch animated fare. 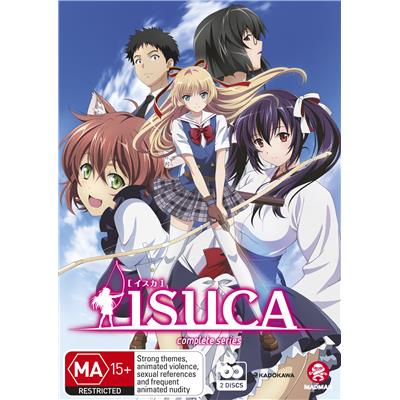