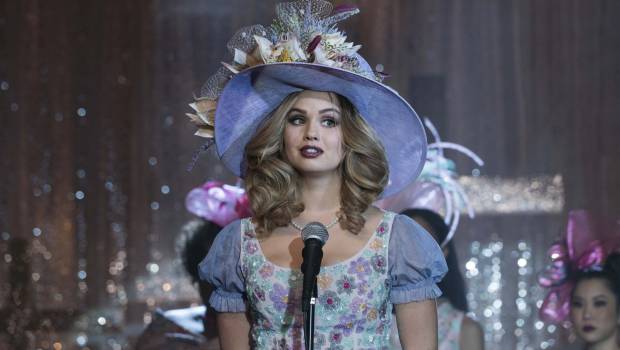 Summary: Insatiable is a toxic program about fat shaming. While high school students can be shallow, this manages to plumb depths so low it’s almost near middle earth.

High school students are a shallow breed. That’s certainly what’s on display in the TV series “Insatiable”. The show was trying hard to be an irreverent and dark comedy but the end product is a tone-deaf look at an awful caricature of a human being.

The series stars a teenage girl named Patty (Debby Ryan). She is derided by her classmates and called “Fatty Patty.” One day she gets into an altercation with a homeless man (Daniel Thomas May). He assaults her and she spends months recovering with her jaw wired shut, which leads to a significant weight loss.

Patty uses her new found hotness to join the beauty pageant circuit. She is coached by her lawyer and former big-shot in beauty circles (Bob Armstrong). He is facing sexual assault allegations and his vapid wife Coralee (Alyssa Milano) also takes Patty under her wing.

Patty has a good friend Nonnie (Kimmy Shields “Big Little Lies”). Hijinks and hilarity are supposed to ensue. Instead the audience are treated like imbeciles with some excessive narration (or this could just be because the proceedings are so ridiculous). The show shoots for wit and irreverence, but all you get is a long exercise in fat shaming, objectification, diet culture and obsessions with unrealistic beauty standards.

The notion of an underdog-type character making good is not a bad premise. For too long most screen portrayals of larger people are that they’re incompetent and/or lazy. But this show is so superficial: Patty is only respected now that she’s thin, which kind of defeats the point. We also don’t understand her relationship with her old body, aside from some references to how she binged on food and too many Drew Barrymore movies. She’s such a despicable character for exacting revenge at every turn. Consider that she sets fire to a homeless man who wronged her for chrissakes! Yes, we get that she wants revenge but this is pure insanity.

“Insatiable” is an awful teen show that should never have been made because it is so morally bankrupt. It is so tone-deaf and one-note that it completely lacks character and nuance to be considered even partially believable. “Insatiable’ doesn’t even seem to be about human beings because it is so bizarre and out there, and you will despise all the characters. And it ultimately won’t satiate anything because this toxic mess will leave you hungry for a smart and sassy program.