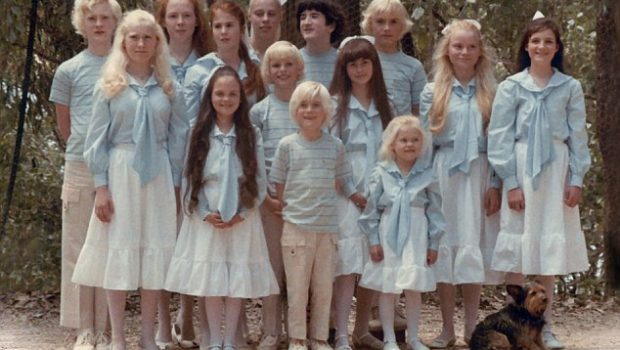 The story of the doomsday cult, The Family, is terrifying. It’s the kind of thing you’d expect from a scary horror movie, not from little old Ferny Creek in Mount Dandenong. The eponymous documentary about this notorious sect lifts the veil and attempts to look inside this mysterious group, and the miscarriage of justice which ultimately took place after it disbanded.

The film is directed by Rosie Jones and in “The Family” she turns her camera on a cult that was started by a yoga teacher in Melbourne in 1963. The leader was Anne Hamilton-Byrne, a woman who believed she was Jesus Christ reincarnated. She would co-found the cult with a renowned physicist named Dr Raynor Byrne.

This film poses a lot of questions and can only answer some of them. We learn that Hamilton-Byrne was born Evelyn Edwards in 1921. She was the daughter of an absentee father and her mother was a paranoid schizophrenic (and it’s quite possible that Anne had this same mental illness). This documentary doesn’t include much information about Hamilton-Byrne’s history beyond these few facts but there may not be much information readily available, especially as Hamilton-Byrne now has dementia and is in care. One of the most disconcerting things is that we never learn about her true motivations for doing what she did i.e. did she truly believe she was being altruistic and kind or was she just a master manipulator, a money-hungry woman and a liar? The film seems to suggest it could be a bit of everything.

This documentary includes new interviews with former members of the sect including former sect children. There is also footage of the children from when they were young Eildon kids. At the time they had matching haircuts, often with the same bleached-blonde hair and they looked like extras from the von Trapp family in “The Sound of Music.” These kids are now adults who are having to deal with the scars from their period living in the cult where they were subjected to beatings, deprival of food and drugging with LSD. The cult was also responsible for marriage break-ups, addictions and suicide.

This film also includes interviews with journalist, Marie Mohr and police detectives who worked on this case. In 1981 a raid was performed by the Department of Community Services and the police, and this would result in six children being seized from the property. One of the detectives who discusses this investigation is Lex de Man who also serves as a consultant on the film. Jones also utilises archive TV news reports and police interviews to construct the story. The results are harrowing- with talk of members being brainwashed, babies being stolen from single mothers at birth and vulnerable people being under Byrne-Hamilton’s vice-like spell/control. At the end, Byrne-Hamilton and her husband Bill Byrne would walk away with barely a slap on the wrist.

“The Family” recreates some of the memories that are described by the interviewees. It also has an incredibly haunting and atmospheric soundtrack that is composed by former Go-Betweens member, Amanda Brown. The extras are interesting and include additional interviews as well as a photo gallery and a trailer.

“The Family” is a chilling and uncomfortable documentary. It manages to dissect the wrongs that were done and look behind-the-scenes at this bizarre and damaging cult. While it is far from definitive it does attempt to expose the truth behind this evasive sect and show how the survivors were failed by the Australian justice system. A true tragedy.