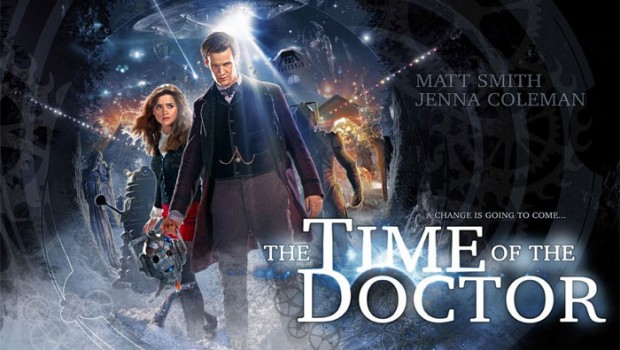 Doctor Who The Time Of The Doctor DVD Review

Summary: Overall, the stories in this set are a mixed bag.

The idea of a Christmas special never seems to have caught on in the Australian television industry.  It’s not surprising, given the shutdown until recent years of normal programming over summer, and the population’s attention turning to the beach, or cricket, or even beach cricket.  And given the dominance of imported television in the schedule, the sight of a Christmas special screening in July would only further alienate the viewing audience from the concept.

Not so in the UK, where its television industry is replete with Christmas episodes of all stripes.  And since Doctor Who’s return in 2005, the concept has been embraced by the BBC for its flagship programme.  Not a year has gone by where a Christmas themed episode hasn’t been served up to a snowbound population, dazedly staring at the television after a day of gorging on turkey, ham, mince pies, sherry, more mince pies, and finally a pudding denser than a black hole and drowned in enough custard to re-float the Titanic.  In short, Doctor Who at Christmas has earned high ratings from its captive, couch-bound audience.

The first featured story is A Christmas Carol.  Not surprisingly, with a script leaning heavily on the Dicken’s classic, it is the strongest story on the set.  Starring Michael Gambon as Kazran Sardick, the story begins with a bang.  A starship, with the honeymooning Rory and Amy Pond aboard playing at dress-ups, faces destruction as it approaches its destination.  Attempting to land it safely, the Doctor has to deal with Kazran (in fine Ebenezer Scrooge mode), who maintains sole control over the turbulent cloud belt dominating the planet’s upper atmosphere.

In the 1990s, Moffat had a short story called Continuity Errors published in a collection of Doctor Who fiction.  It featured the Seventh Doctor manipulating the past of a recalcitrant librarian so she would lend him a book.  Never afraid to recycle an idea, Moffat uses the episode’s broader canvas to depict much the same, as the Doctor races the clock to change Kazran and save Rory and Amy.  Along the way, however, a love story unexpectedly blossoms and in an ending both heartbreaking and uplifting, the Doctor saves the day. 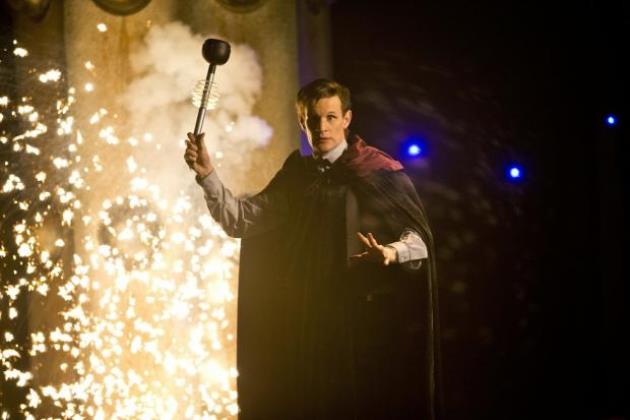 Gambon’s depiction of an embittered character slowly changing and growing happier thanks to the Doctor’s interventions is a delight to see.  Matt Smith brings his trademark manic energy to the role, lifting some dull lines by sheer force of will.  Punctuated by excellent design, beautiful visuals and some startling effects, A Christmas Carol is one of the best Doctor Who Christmas episodes.

Sadly, the opposite is true for the follow up, The Doctor, the Widow and the Wardrobe (frankly one of the clunkiest titles ever to grace a Doctor Who story).  It’s hard to imagine which was the biggest turkey of that year’s festive season; the bird served up at the dining table, or the episode itself.

Doctor Who has never been shy in its pillaging of books, television and movies to draw inspiration.  Here, Steven Moffat burgles the entire Narnia oeuvre in one of the most blatant borrowings ever.

The Doctor, the Widow and the Wardrobe is a slow moving, saccharine train wreck that sets out to tug at the heartstrings of the audience and instead sends them to sleep.  The Arwell family have been Blitz bombed London to Dorset.  The mother (Claire Skinner) attempts to keep her children’s spirits up in her pilot husband’s absence, while confiding in the Doctor her knowledge of her husband’s death.  As a result, the Doctor attempts to raise the family’s spirits.  While the basic set up is sound, the viewer has to face the fact that without the Doctor’s intervention, none of the ordeal the family goes through would’ve happened (on the flip side, the happy ending couldn’t have happened without the Doctor’s intervention).

Unfortunately, there’s little in the way of menace that so often enlivens a decent Christmas tale, and while the visuals are often stunningly realised, without a decent story to carry them along, they come across as hollow and without purpose.  A pointless appearance by comedian Bill Bailey (watch Black Books for what he’s really capable of) is capped only by the tweeness of the ‘everyone lives at the end’ finale.  Visually beautiful, emotionally empty, The Doctor, The Widow and the Wardrobe is a low-point in Matt Smith’s era.

Things pick up in The Snowmen, immeasurably helped by Richard E. Grant’s menacing turn as Doctor Simeon.  Here, the Doctor is brooding in Victorian London over the loss of Amy and Rory at the end of The Angels take Manhattan.  The Paternoster Gang (Silurian Vastra, her partner Jenny and their comedy sidekick Strax the Sontaran) also feature in a story that has Jenna Coleman appear once again as the second version of Clara.  Unwillingly convinced to investigate the murderous depredations of living snowmen, the Doctor comes face to face with an old enemy from the show’s history – the Great Intelligence (voiced by Ian McKellan).

The Snowmen is a strong entrant in the canon of Christmas specials.  While the Great Intelligence’s plan is frankly bonkers, even by Doctor Who’s sometimes slipshod villain motivations, it is very entertaining fare.

Jenna Coleman, returning after her first appearance in the show in Asylum of the Daleks, shines as the spirited, but doomed governess intrigued by the Doctor and unafraid of the menace posed by the Snowmen.  There’s real warmth in her interactions with Matt Smith.  What is puzzling is Moffat’s inability when Coleman later permanently joins the cast to depict her as anything other than a cypher, given her strong showing in this story.

Featuring some excellent set pieces, including the Ice Lady who freaked my children, The Snowmen is excellent festive fun.  Featuring the worst joke in Doctor Who history (hint – Tom Tom) it nonetheless forms the cornerstone of a mystery that would eventually be resolved in the next series’ finale, The Name of the Doctor.

And so we come Matt Smith’s swansong, The Time of the Doctor.  It’s the norm now that regenerations feature at Christmas time.  That fact maximises the audience, but robs the show of the opportunity to surprise viewers.

Matt Smith is almost universally loved by the show’s audience.  His love of the role, willingness to mingle and interact with fans at conventions and his ability to link with children, is well known and rightly celebrated.  But there has long been some discontent that the writing in his era hasn’t always met his ability.  Mostly he’s been able to mask that lack of quality with the energy of his performance, but sometimes, as shown in this episode, that isn’t enough to mask fundamental flaws.

The most obvious problem has to do with stuffing a regeneration story into a Christmas special.  At the same time, Moffat unforgivably decided to resolve every single plot hole and dangling string of the Matt Smith era, instead of carefully building towards that resolution over the previous series.  Even worse for those fan geeks out there, he has elected to make this regeneration the Doctor’s ‘final’ regeneration, gifting himself as showrunner the ‘glory’ of being the writer to give the Doctor a new set of regenerations, and in the process, totally screwing up the number system fans have long been accustomed to when describing each Doctor’s incarnation.

Critically, the first ten minutes of momentum are irretrievably lost as a Christmas scene is shoehorned into the beginning.  The episode would have worked perfectly without any link to Christmas and betrays the essential staleness of Yuletide themed episodes.  When we do get to the meat of the story, it devolves into a parade of greatest hits from the Moffat/Smith era, with every key monster featuring in a cameo that serves only to impede the forward momentum of the story.  Quite what Moffat was hoping to achieve with this approach is difficult to determine.  But throwing a dozen elements at the screen in the hope a plot emerges isn’t the way to craft a story.

A regeneration story should have consequence.  And while the Doctor’s last lines in the TARDIS are undeniably poignant, Matt Smith is robbed of the chance to really go out in a style befitting his time in the role.  Instead of a heroic sacrifice a la Peter Davison’s Fifth Doctor, we see the Doctor essentially age to death, resigned to his fate right up until Clara saves the day with an impassioned speech to the Time Lords hiding in their pocket universe.

Only the dignity Smith brings to his ageing incarnation holds this hotch-potch of an episode together.  His energy will be missed and we can only hope he returns to the series in future specials celebrating the show’s history.  But with Capaldi in the frame, the King is dead, baby, long live the king.

Overall, the stories in this set are a mixed bag.  Given the multiple Christmas settings, they lack the variety that is the hallmark of the show.  When they are on song, like A Christmas Carol, they are entertaining, thought provoking fun.  When they aren’t, you tend to lose sixty minutes of your life to stale, unrewarding writing.

Special Features – the set is surprisingly light on for special features.  Behind the Lens takes us on a quick tour of the making of the story.  Featuring interviews with all the main players, it is an invaluable record marking an important point in the show’s history.  Tales from the TARDIS, made by the same people who brought us The Doctor Revisited sets, looks at regenerations, the TARDIS, and monsters yet again.  The perfect primer for new fans, and a chance for older fans to reminisce about the classic series.

Audio 5/5:  Murray Gold must be an absolute Trojan, churning out score after score over the last eight years.  While sometimes overblown, the mix here is perfectly balanced, and Capaldi’s first words, despite the excitement of the music playing underneath, are coherent.

Visuals 5/5:  in the HD era, the quality of the visuals are second to none.  Crisply shot, each story’s colour palette perfectly matches the required Christmassy feel.

Special Features 3/5:  essentially a barebones release, with something a little extra to watch while sipping your eggnog and wondering if your heart will endure just one more mince pie… 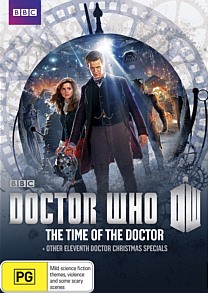