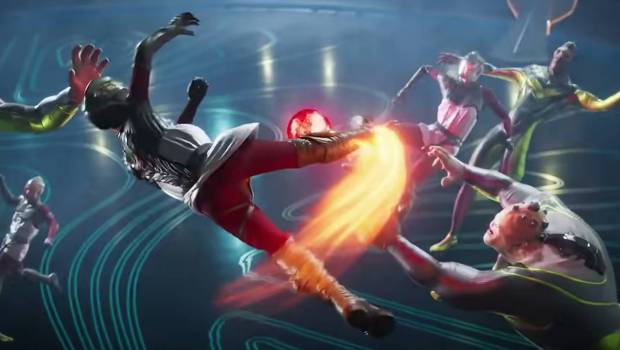 Summary: Feels like a child in an adult body. Brainless, but non-offensive enough I suppose.

"Then damn the foolish laws!"

Twenty years after an alien space battle blows up the moon, Earth’s survivors are addicted to the sport of Cosmoball while the evil alien responsible is imprisoned below the arena. What people do not know the entire sport is just a ruse to keep the baddie from blowing up the earth.

Anton, the one person on Earth who hates Cosmoball and curses his bad luck is thrust into being a participant of the sport when he finds he can teleport and endgame is underway.

This movie is a bit of an odd duck and feels like a child in an adult’s body. If it didn’t overdo some of the violence it would have been rated PG but it is Russian so daily life is different there. I can understand the sales reason they dubbed it into English, but I would have liked the opportunity to watch it in the original Russian with subtitles as I enjoyed the Night watch/Day watch films that were done similarly.

The story is pretty much fold tab A into slot B and you can pretty much tell what is going to happen. Some of these characters are very dumb and the bad acting does not really help matters. Also I would doubt people would just sit around in garbage for 20 years and not clean up.

Having a new sci-fi setting that is not based on a franchise or another well-known series is rare these days and hard to set up as they are usually difficult to film. If you know a lot of these types of stories you will no doubt recognise elements that this story is based on from Dragon Ball Z and such.

I would have liked to see more of the giant space puppy, the show reel of the special effects company that worked on the movie shows it running around on set and knocking stuff over. The space puppy has more character than the main lead which is a worry. He just comes across as a simpleton who trusts the first random that he meets and almost gets everyone killed.

The effects are done well even if you have seen a lot of them before. Being from Russia this movie is probably made for a lot cheaper than you would think. I am interested in seeing more films from that country as even if they are propaganda, they are at least different to USA-centric stuff that is used to and is always interesting to see a different perspective.

I am not really sure the classification of this as it says M-rated but it is very childish in nature. A lot of parents do not seem to care these days but if you are concerned just chapter skip through it yourself. There are really only a couple of scenes that would have earned it this rating like the boob joke for the Amazons and the needles going into the head scene.

Even though it has violence in it, most of the story is light and fluffy and an easy watch for people who want something not so serious.