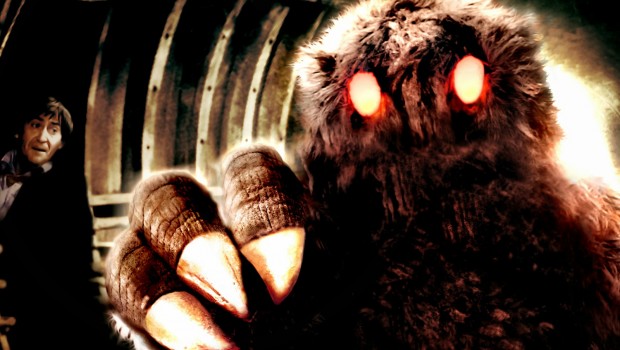 Doctor Who The Web of Fear

Summary: The Web of Fear has proved a hit with buyers, selling 15,000 copies in its first week of release, propelling it to the top of the charts in the UK.

The very best of classic Doctor Who usually features a base under siege, and a reliably spooky atmosphere fitting to the usual transmission date of somewhere deep in a gloomy winter.  The newly unearthed, and almost complete story, The Web of Fear, features both these elements in spades.

The first episode opens with a direct homage to the Hammer Horror films of the day, set in a creepy house filled with strange, stuffed animals and curios from far flung lands.  Candle lit and shadowy, the main feature of this bizarre collection is a Yeti, first seen in The Abominable Snowmen.  Director Douglas Camfield does wonderful work here, raising a children’s tv show to the standard of a film, fully utilising the techniques of the day to develop a real sense of creeping claustrophobia. An old friend of the Doctor from the early story, Professor Travers, reappears at this point, demanding the return of the exhibited Yeti, as his meddling with its control sphere has seen it come to life and promptly disappear.  After Travers is seen off by the indignant owner of the house, the sphere revives the Yeti.  In short order, it kills the owner, and we’re off to the races with yet another invasion of Earth.

Straight afterwards, we return to the TARDIS, where they are picking up the pieces after their climactic encounter with Salamander, as seen in The Enemy of the World.  Landing in London, the Doctor, Jamie and Victoria find themselves in a deserted Underground station.  Quickly, they are confronted by a nempty city and a cobweb shrouded corpse.  From there, they venture deeper into the Underground, where an old enemy, the Great Intelligence, awaits them. 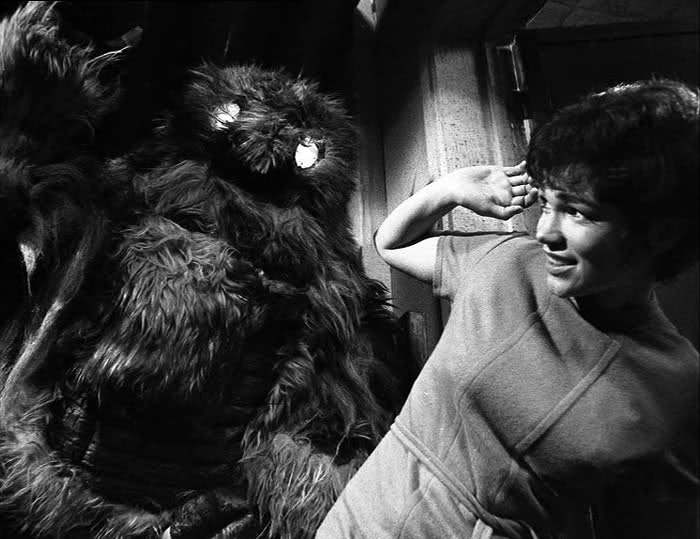 Lost for forty five years, the story of the return of most of The Web of Fear to the BBC is almost as remarkable as being able to see it after so long.  With episode 3 still missing, and represented by the soundtrack and a series of telesnaps taken by an enterprising fellow by the name of John Cura, the remainder of the story has been lovingly restored.

So does it live up to its long held reputation as a classic Doctor Who story?  Directed by Douglas Camfield, who had previously worked on the epic Daleks’ Masterplan (coincidentally featuring Nick Courtney in another role), the visuals of the story often work better than the story itself.  The reproduction of the London Underground is nothing short of marvellous.  While you can tell in some shots that the extension of the tunnel is a blow up of a photo, nonetheless they have enough verisimilitude to enable the viewer to suspend disbelief long enough.  Camfield’s directing is often interesting and innovative.  Too often, particularly in its latter years, directors of Doctor Who would be content to simply ‘point and shoot’ the scene, sacrificing creativity in the face of a looming studio shutdown.  Here, Camfield takes time to set up his actors and shots.  Frequently, we find a scene features a character in the foreground, interacting with characters in the background.  While it seems fairly basic, what it does is lend the scene a sense of depth, belying the otherwise cramped confines of the television studio.

Performances are almost uniformly entertaining.  While Jack Watling as the aged Professor Travers is more music hall in style than the others, the ‘bigness’ he brings to the role is very entertaining.  On the more reserved side is Tina Packer as Travers’ daughter Anne, a scientist in her own right.  Her appearance as the only other woman in the cast offers an interesting contrast to Wendy Padbury’s Victoria.  Whereas Victoria sets your teeth on edge with her seemingly endless whining and complaints, Packer gives Anne Travers a tougher edge, willing to go up against journalist Harold Chormley whose populist instincts grate against her scientific detachment.  Towards the end of the story, when the running about and peril reach their peak, Anne Travers devolves into the typical depiction of a weaker woman, but her early episodes are an interesting study in a stronger, capable woman, something Doctor Who only rarely did.

Even the lesser roles are distinctive.  While the two officers present, Knight and Lethbridge-Stewart, represent the upper, better educated classes (the clue is in their accents), the other regions of the United Kingdom are shown (again the clue is in the accents and indeed the attitudes of the men).  Camfield, a former soldier, allows the the men in the lower ranks a chance to shine, giving their brief appearances a humanity another director might have ignored.  The one that stands out is Evans, a Welshman played by Derek Pollitt with great effect.  Constantly on the edge of desertion and insubordination, the performance is entertaining and a great deal of sly fun.

It would be remiss not to mention Nick Courtney’s first appearance as Alistair Lethbridge-Stewart.  Here a colonel in rank, Courtney gives an interesting dual performance.  With the possibility that one of the humans in the Underground is in league with the Great Intelligence, Courtney presents as slightly sinister, to serve the purposes of the plot.  For those watching in 1968, the unfamiliar Colonel Lethbridge-Stewart might very well have presented as someone who might be working for the enemy.  The other aspect to the role, which does cancel out the sinister aspect (a fault in the writing we’ll deal with shortly) is Courtney’s very human depiction of a leader under great stress.  The sensationally filmed battle between the soldiers and the Yeti seen in episode four ends with a massacre of the humans.  Only just escaping with his life, Courtney brings a real quality of mourning and despair to his character in the aftermath of the killing, something not seen again in Courtney’s subsequent appearances in the role.

While the visuals are largely excellent, at key moments, the writing lets the story down.  The main problem is the idea of the traitor in the ranks doing the bidding of the Great Intelligence.  A standard trope, but an exciting one nonetheless as it lends another angle to a story replete with lumbering monsters, it is deployed poorly here.  While the emphasis shifts from one character to another as to who the traitor might be, the eventual revelation makes absolutely no sense whatsoever, and completely undercuts the impact it might have had.  Coupled with the story being an episode or two too long, and the writing and plot tend to drag when it should be accelerating to the finish line.

As always, Patrick Troughton steals the show.  His performance, veering between childlike and serious, is a masterclass in playing the role of the Doctor.  With Frasier Hines, the two make a delightful double act, and you can see the friendship the two man had away from the camera shining in their performances.

The Web of Fear has proved a hit with buyers, selling 15,000 copies in its first week of release, propelling it to the top of the charts in the UK.  Building on the successful base under siege template that would serve Doctor Who very well down the decades, it is a fantastic mix of entertaining visuals and spot on performances.  It’s almost miraculous reapparance after so long offers an exciting window on television from almost half a century ago.  Who knows, with rumours of more missing Doctor Who episodes on their way back, we may be able to experience the 1960s all over again.

Audio:  the soundtrack for episode 3 derives from an audio recording made on first transmission.  As a result, it isn’t up to the standard of the other episodes, but is perfectly listenable.  Overall, the audio is clear and comprehensible. 4/5

Visuals:  while the iTunes release of this story was missing the benefit of the Vidfire process (which returns the look of the filmed episodes back to their video recording) the DVD is blessed with it.  While the switch between filmed work and video tape is noticeable, it’s not so jarring that it takes you out of the story.  On the big screens of today, there is some blurring during fast movement, but by and large, given the state of the films after forty five years being shuttled round the world and sitting on a shelf in tropical Nigeria, the restoration work on them is remarkable.  4/5

Special features:  the secretive, rush release to get the story to market and take advantage of the worldwide attention on their release meant there was no chance to assemble the usual package of special feautures we’ve long been used to with Doctor Who.  Apart from subtitles, there are no special features.  Rumours swirl of a special edition later this year, but for the moment, this release is all we have.  1/5 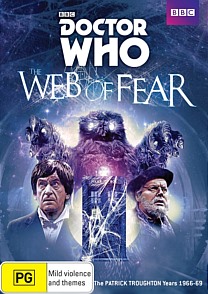