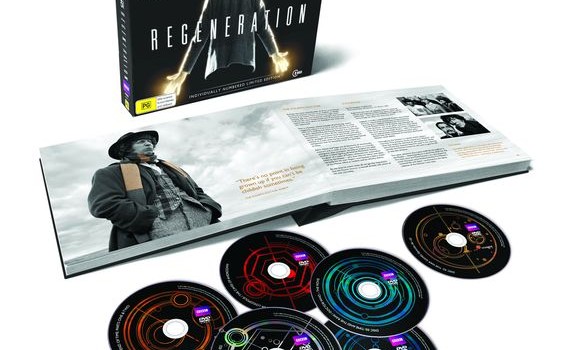 This is a must have collection for Doctor Who fans that not only features an anthology of Doctor Who Regeneration episodes but gives collectors a beautiful hardcover book about the various Doctors who have graced this colourful and popular character. This collection is an individually numbered limited edition with a maximum of 10,000 copies available in our region. Boasting six DVD’s that total almost 1000 minutes, it collects every episode of the Doctor’s regeneration from the first Doctor to David Tennant’s run. What makes this collection even more special is that it features The Tenth Planet which has been beautifully restored and looks amazing on DVD and celebrates 50 years of Doctor Who.

Disc 5
TIME AND THE RANI
DOCTOR WHO – THE MOVIE

Disc 6
BAD WOLF / THE PARTING OF THE WAYS
THE END OF TIME: PARTS ONE & TWO

As mentioned, the highlight of this collection is The Tenth Planet which is the first time that these episodes have been released on DVD. I also enjoyed episode 4 of The Tenth Planet which is an animated Doctor Who episode and successfully tells a key landmark to Doctor Who (William Hartnell incarnation) history, especially with the villainous Cybermen. Another interesting element of The Tenth Planet is that it’s almost a history lesson on the 1960’s that uses BBC footage to help tell the story as the Doctor and his companions as they attempt to protect the son of an astronaut. These episodes not only established the Cybermen as a true threat to not just the Doctor but also humanity and is a great walk down memory lane that eventually leads to the first regeneration of the Doctor. Although it is quite clichéd and a little tacky due to the time it was filmed, it is still quite a powerful and emotional Doctor Who story that laid the ground work of things to come.

Following The Tenth Planet is War Games which was the last time viewers would see Patrick Troughton as the good Doctor. As the Doctor uncovers a plot by aliens to embark on a universe conquering invasion, he is forced to take matters into his own hands and assist the rebels but calls forth the damnation of the Time Lords. As a result, this forces the Doctor onto his next regeneration. The next regeneration episode is Logopolis and features the classic Tom Baker as the fourth Doctor. This pits the Doctor against his long-time nemesis, the Master in a memorable battle between good versus evil. Although the Doctor vanquishes his nemesis for now, he lies dying that leads to Peter Davison taking over as the fifth Doctor.

Another interesting regeneration story is Planet of Spiders which sees Jon Pertwee end his reign as the Doctor. These episodes still give me the frights (it doesn’t help that I’m an arachnophobia) that focuses on a planet full of giant spiders and their Queen but also on this planet is a small population of humans with strange powers. As the Doctor is used by the Queen to retrieve a mysterious artefact, she possess his companion Sarah Jane which forces the Doctor to sacrifice his life in order to rid the planet of these nefarious spiders. As the Doctor escapes in the Tardis, he is severely poisoned by radiation as he is comforted by Sarah Jane in his last moments.

Next up is the Caves of Androzani that is the final episode of Peter Davison and when the Doctor (Davison) arrives on the Androzani Minor with his companion Peri, they are caught in the corruption of a space mining company that forces the Doctor to sacrifice himself and features one of the most clever regenerations to date. I was quite sad to see Davison replaced by Sylvester McCoy and even though he had a bumpy start, his interpretation of the Doctor was actually quite fun and insightful.

In Time and the Rani, the Doctor is challenged by Rani, a renegade Time Lord and is unfortunately one of the most uneventful episodes included in this release. To compound the situation, it is flawed with a bad story, horribly dialogue and a story that really doesn’t make much sense. Thankfully Doctor Who the Movie which features Paul McGann as the eighth Doctor more than makes up for the flaws of In Time and Rani. This is almost a blockbuster event for Doctor Who, especially those fans from the 90’s that sees the Doctor take on the Master at the turn of the millennium in 1999 that combines elements of H.G. Wells. Apart from McGann who played a great Doctor is Eric Roberts who successfully played one of the most villainous Masters to date. It’s a shame that this movie didn’t succeed with fans as I would love to see McGann continue his run.

The last three stories on this collection feature Christopher Ecceleston as the actor who successfully relaunched Doctor Who. As Jack, Rose and the Doctor have been kidnapped, this two parter (Bad Wolf/The Parting of the Ways) is another snapshot of society as the trio is forced to participate in a sadistic version of Big Brother that sees the Doctor selflessly sacrifice himself for the greater good. As a result, this leads to the 10th regeneration of the Doctor and we see David Tennant take on the guise of the new Time Lord. Last but not least is The End of Time: Parts One & Two and is another favourite episode of mine. Once again it pits the Doctor against the Master who sees our hero stopping his nemesis before he changes the DNA of mankind. It’s another emotional episode, especially the “death” of the Doctor who is replaced by fan favourite Matt Smith that nicely finishes this collection.

Regeneration is a wonderful insight into the Doctor Who mythology, especially regarding his death and reborn. Apparently the Doctor can only regenerate 12 times… we’ll see if that sticks however! Recommended!