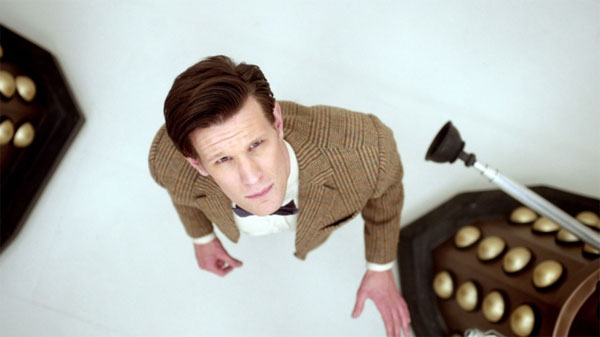 Summary: These three discs focus new series success, through the recollections of participants either side of the camera

Almost a decade since its return, it is still difficult, for hardened veterans of the so-called wilderness years, to quite comprehend Doctor Who’s triumphant return to television.

Your reviewer, illicitly accessing the internet at work, recalls the news item on the Outpost Gallifrey’s news section regarding the announcement by the BBC that Doctor Who, under the aegis of noted script writer, Russell T Davies, would be returning to television.  Appetites were further whetted when Christopher Eccleston (Cracker, The Second Coming) had signed on in the role of the Doctor.

Volume 3 covers the years since the return, which have been a triumph for the series, cementing it as one of the jewels in the BBCs schedules and a massive money spinner for the Corporation.  These three discs focus new series success, through the recollections of participants either side of the camera.  While Christopher Eccleston has effectively washed his hands of the role since his abrupt departure after just one series, there is no denying that the credibility he brought with him helped ‘sell’ the return of the show to a broad demographic. David Tennant (Casanova, The Escape Artist) captured the zeitgeist in the middle part of the decade, delivering ratings for the show unseens since the mid 1970s.  Matt Smith (Party Animals, In Bruges) has admirably carried the torch all the way through the 50th anniversary year, channelling Patrick Troughton to an appreciative audience.

The strength of these discs is in the interviews.  Apart from Eccleston and Russell T Davies, most of the major participants in the last eight years contribute.  Most of the input from each interviewee discusses the lead actors.  Listen to Corey Johnson (Henry van Statten, Dalek) and you hear an actor profoundly impressed by what Eccelston brought to the role.  David Tennant underplays his impact on the series, but as a long term fan of the show, you can sense his immense pride in being part of its history, and the impact he had on the public.  And Matt Smith, who came to the show knowing virtually nothing about it, is to see a fine actor embrace the role to the point where his departure seems to have been a little unwilling.

The stories chosen for each Doctor show off the best and worst in the approach of the new series.  Russell T Davies basically throws everything and the kitchen sink at the screen in the two part finale to Eccelston’s tenure, filling the skies above Earth with more Daleks than had ever been imagined in even the most feverished fan dreams.  The approach can overwhelm the pleasurable characterisation going on around it, instead of heightening it.  That said, with the Dalek menace swept away, Eccelston’s final, heartfelt words do strike a resonant emotional note.

Tennant is represented by the two-parter The Stolen Earth/Journey’s End.  Again, the audience is overwhelmed with ‘big’ moments Davies loved to devise for his season ender’s, the biggest of all being the cliff-hanger to The Stolen Earth.  Regrettably, he (and the BBC bean counters) chickens out of actually killing off the Tennant incarnation, and the last quarter of the episode is a sickly mess, alleviated only by the grim tragedy that befalls Donna Noble (Catherine Tate).

With Matt Smith came the new show runner Steven Moffat, a trickster, more subtle writer keen to stamp his style on the show.  The romance is still there, but he portrays his big ideas in a more sympathetic manner than Davies.  The stories here are The Impossible Astronaut and The Day of the Moon, absolute standouts not only in the Smith era, but the entire new series.  Beautifully shot on location in south west USA, the story is intricately structured (but no so much as to confuse the careful watcher) and is amusing, sinister and breathtaking all at once.  The best stories in this volume are on this disc and for quality and novelty of interviews, volume 3 is the pick of The Doctors Revisited. 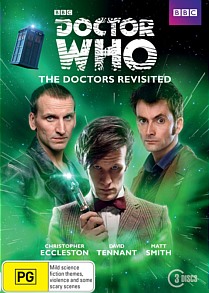