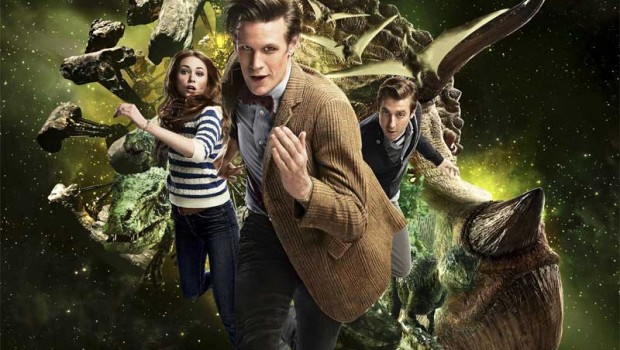 Summary: Now we just have to wait but thankfully not too long!

2013 is the Year of the Doctor that not only celebrates 50 amazing years of this entertaining and thought provoking science fiction series but November 23rd will be THE day that Doctor Who fans will remember. This is the day that BBC are releasing their 50th anniversary special entitled The Day of the Doctor.

To celebrate this landmark event, the BBC have released the entire 7th series of Doctor Who in this amazing collector’s edition with a 3D inspired Tardis cover that is prominently displayed. Given that, the 7th series of Doctor Who has been a mixed bag that at times comes over as a dry assortment which does very much feel like leftover scripts and reheated ideas from Stephen Moffat.  And whilst some people are more gushing than I, I don’t know anyone who’s lining up to say this is the best season yet, especially due to some wasted opportunities and noticeable vacillating between doctor who being the adult show that it could be and the kids show that the producers think it is. Nonetheless, let’s dissect series 7!

Asylum of the Daleks

Lets try to make Daleks scary again! That’s actually a good idea. A Dalek asylum that’s actually a good idea too…. What’s more frightening than a regular Dalek? An insane Dalek or is it, after all a Daleks automatic response to any given new situation is to exterminate it, what would an insane Dalek do? Exterminate it and laugh? Try to give you a bunch of flowers? Also it contradicts the Daleks creed, the sick and lame would be exterminated surely? In almost every way this episode is a lost opportunity, if anyone didn’t see the plot twist coming hand your brain in, you’re not using it properly.

Dinosaurs on a spaceship

So there are these dinosaurs, on this spaceship and Queen Nefertiti is along for the ride as well as an 19th century big game hunter. Both characters are totally superfluous to the plot and would not have been missed had they been left out.  It is still an enjoyable romp however and the addition of Mitchell and Webb as two bickering robots only makes it better. The fact that the doctor loses his temper makes it one of the more believable stores in this series despite the premise. 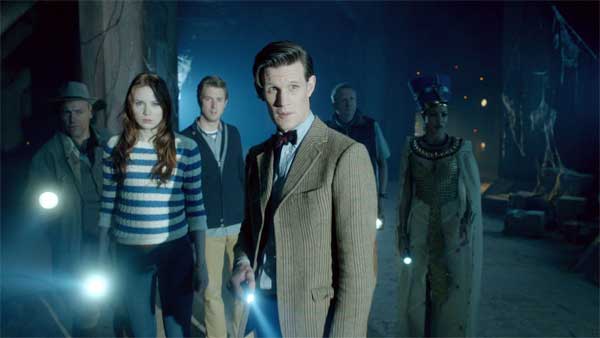 Er….yeah…how would you like some subtext shoved down your throat? No? Don’t watch this one. Cause the Doctor is no longer remembered by the universe and in case you missed that there is no way you could miss it after this episode. In Dinosars on the spaceship the doctor got mistaken for another doctor, in this episode there actually is another doctor. Also unless you’re making Firefly the old west and sci-fi don’t’ mix. 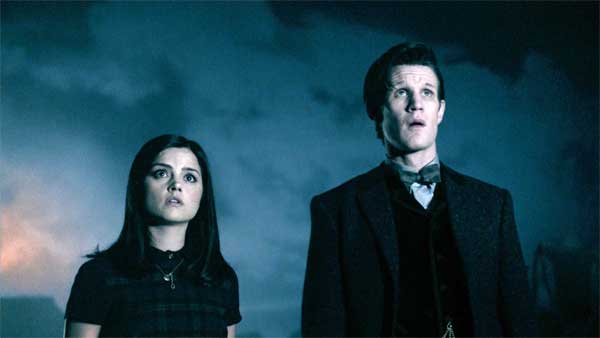 The Power of Three

What would a season of Doctor who be without an alien invasion or Earth, every aliens favorite planet? Also has an alien invasion been this cool and also so easily defeated? Mysterious cubes…Love the mysterious cubes; I also really love Rory’s Dad, not so hot on just being able to press a few buttons on a computer and reversing everything that’s happened in an adventure. It’s like the aliens installed  a big red reset button just in case they changed their mind. And yes..a cube is the power of three..but maths puns are the lamest puns ever.

Not cool, not ok. Suicide should never be portrayed as the solution to any problem. Yet it has happened twice this series. Not cool. Maybe Steven Moffat is very depressed. Still he promised us that Amy and Rory would leave this episode and they did, he also promised us that this would be a tear jerker and…well it’s not. Cause no matter what you can say about the Angels it’s been drummed into us that they don’t actually kill people. Sure the Doctor might be sad but the fact is that they lived a good life somewhere out there. Also there’s the nagging feeling that since the Doctor ignores the laws of time whenever he wants he could go and see them but he’s a bit over Rory. 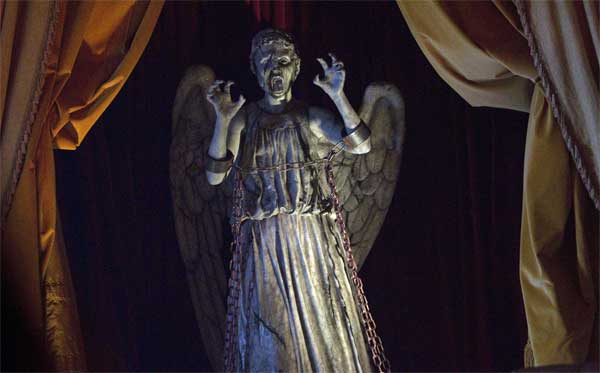 We start off with the Snowmen, last year’s Christmas special. The Doctor acting like a petulant child decides that since Rory and Amy are gone he is not going to save the universe any more so he decides to Park the Tardis above Victorian England and retire. The same Victorian England that Strax, Jenny and Madam Vastra live in. No-one in the audience thinks that this state of affairs is going to last long but the characters in the TV show don’t know the Doctor like we do. So when people start being murdered, the doctor unsurprisingly though reluctantly comes out of retirement. It is here that the Doctor meets Clara, of course we know what Clara is the same Clara from last year’s Asylum of the Daleks but because the doctor never saw her but he doesn’t put two and two together till later.

The Bells of Saint John

The Bells of Saint John is one of the better episodes of this season, but frankly this is one of those episodes that the pre-episode makes better by far so make sure you watch that before you watch this epp. Really there should be an option on the disk for you to play all with the mini-sode prequels. But there isn’t. The Bells of Saint John works as a good modem take on the alien invasion story. Although the invaders are not aliens…as such but familiar adversaries.

The Rings of Akhaten

The Doctor wants to take Clara somewhere special, so he takes her to an alien night market. Where there is multitudes of aliens and a runaway singer who is going to sing their gods to sleep. And then there are mummy’s and some bartering over a leaf and it’s the Doctor vrs a god. And it’s a terrible episode.

I have never had much time for Mark Gatsis as a writer for Doctor Who, there’s no denying that he has been responsible for the worst episodes of the new series. In fact no episode that he has written for this new series has been even watchable. Except for this one. I have to admit this isn’t a bad episode. The thing that lets it down isn’t the writing, it’s the production. It’s clear that this submarine based adventure was just a little too adventurous for the production team.  The submarine isn’t particularly convincing, the acting is good and it’s great to see the Ice-warriors back and in form, being justifiable feared in a claustrophobic environment. I wasn’t a fan of the Ice-warrior leaving his suit and being a giant squelchy thing but I understand where it’s coming from and in the context of the story it worked and I liked the fact that the Doctor was baffled by it. The only thing I didn’t like really was the ending which was wasn’t so much an ending but a “ok I really have to wrap this up now”.

Hide is a good story, it has some great atmospheric sequences and is as much a homage to Nigel Kneele’s The Stone tapes as it is a Doctor who story. It is strange in the fact that it seems to indicate that the Doctor believes in Ghosts, ESP and various other things that the series has railed against in the past. It’s not necessarily a bad thing just inconsistent. In other respects a perfectly good episode with a great cast.

Journey to the Centre of the Tardis

When the Doctor turns the Tardis shields off to let Clara pilot the Tardis a salvage operation takes the ship and Clara is trapped in it’s core. What follows is somewhat of a mess, there are ghostly molten beings following our hero’s about for no apparent reason, worse it turns out that they are echo’s of the crew itself who have been exposed to the eye of harmony and it’s never sufficiently explained how or why. And the subplot about the practical joke where the crew have tricked their younger brother into thinking he’s an android is just nonsense.

Moffat seems to love the 19th century. And we are back there where Madam Vastra, Strax and Jenny. The Doctor is missing and there are strange Red men being pulled up from the river. This is a strange story. It’s not a bad story. It has some great things going for it. Like Dianna Rigg being a brilliant villain. But dressed up as it is, it has to be said that this is simply another aliens invading earth story.

If there was an episode that people were looking forward to it was Neil Gaimen’s crack at making the Cybermen scary again. Given how amazing Neil’s first episode from the series was it was reasonable to think that there was a good chance that this would be the standout episode of this season. Unfortunately he only succeeded in making them the Borg. Arguably the Borg owe their progeny to the Cybermen and there were already a great deal of similarities however the great Neil Gaimen only made them more obvious and added similarities that we didn’t need. Never mind me not getting over the return of our universes Cybermen. But there are some great things about this episode the allusions to “The Turk” the idea that the emperor of the universe has been so scared by the cyber wars that he ran away to join the circus. The fact that the Cybermen finally use all the tools at their disposal to destroy and wage a path of destruction. But the fact that some of the scenes, especially the ones where the Cybermen are adapting to the weapons by repairing themselves as well as making the shields is so Borg it’s not funny.

The Name of the Doctor

Strangely the standout episode of the season and the prequel for the 50th anniversary it’s a fairly good lead-up. The great intelligence gets its final appearance presumably forever. It’s a shame that there’s not a Yeti in sight, just Whispermen. And the worst thing is that the timeline doesn’t work out. If the great intelligence was destroyed back in the 1800’s then how does it menace the second doctor in 1960’s London? Despite all this it’s a great story and it makes you hungry for the 50th anniversary special.

Now we just have to wait but thankfully not too long! 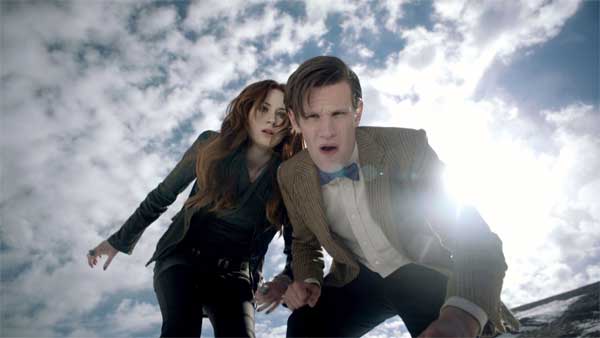 Audio quality is 5.1 Dolby digital surround and is quite a good mix actually, especially to the episode hide. Video, I don’t think I’ve ever complained about a modern BBC release and it’s video quality they are all uniformly excellent. 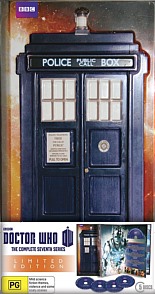 There are a plethora of special features on this release that include the following;