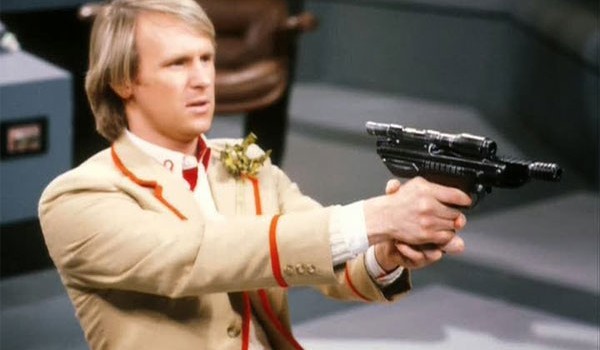 Summary: The highlight of Volume 2 is Colin Baker who ably defends his era as the Doctor

If Volume 1 of the Doctor Revisted represents a trip through the goden era of the show’s history, then the follow up demonstrates the slow, fitful decline of the series.  An obsession with continutiy, too much violence, a shirnking budget and playing it safe too often all contributed to the initial cancellation, then the final end in 1989.

And yet, by the end of this volume, with its examination of the Paul McGann led TV Movie, there was a spark of hope for Doctor Who fans, a glimse of the future that dawned in 2005.

Though barely mentioned in any of the discussions covering the 1980s, the producer, John Nathan Turner, looms large.  Keen to update the look and feel of the show for a new decade, Nathan-Turner allowed his script editors free rein to put their stamp on the series.  What this created was unique to the series – instead of a vision from the producer’s office, it was the script editors – Christopher Bidmead, Eric Saward and Andrew Cartmel, who really shaped that decade.

Perhaps the greatest influence came from Nathan-Turner’s longest serving script editor, Eric Saward.  Keen to tap into the 80s obsession with action adventure, Saward brought that template to the series, albeit on a BBC budget.  Two of the four stories in this volume exemplify his apporach.  Earthshock, perhas the best Cyberman story in the 20th century, is pure thrills and spills, complete with butch freighter captain and macho military leader.  Vengeance on Varos, initially criticised for its depiction of violence, on second viewing is a startling satire on violence on television, and a pre-cursor to reality television we are blighted with today.

A quick note here regarding the stories shown with each Doctor.  Each is the movie version, lacking the cliffhangers.  Which means that the silent end credits to Earthshock, so much to do with fans’ strong memories in the aftermath of Adric’s (Matthew Waterhouse) sacrifice, have been replaced with rebuilt credits and the usual Doctor Who theme.  Puzzling.

As with its predcessor, volume 2 quickly evokes each era in broadstrokes, presenting an excellent entry point for a new fan interested in getting to know the basic facts.  Having Peter Davison, Colin Baker and Sylvester McCoy on hand is a definite plus, enabling them to guide the viewer through the different aspects of their respective time on the show.  The Davison disc is perhaps the guest, as all the actors playing his companions get their chance to shine.

Probably the highlight is disc 2, where Colin Baker ably defends his era, exhibiting a fierce loyalty to the character he brought to the Doctor, and a certain melancholy that he didn’t get to the portray the Doctor as he truly wanted.

The curio of the set is the Eighth Doctor disc.  By 1996, the series was considered dead (current show runner Steven Moffat says as much on this disc) yet almost out of the blue, it returned…and failed.  But in returning, the ratings figures in the UK and the depiction of a more romantic, human Doctor, demosntrated with the right approach, Doctor Who could once again take centre stage on BBC1. 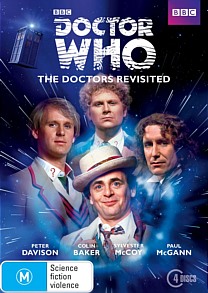