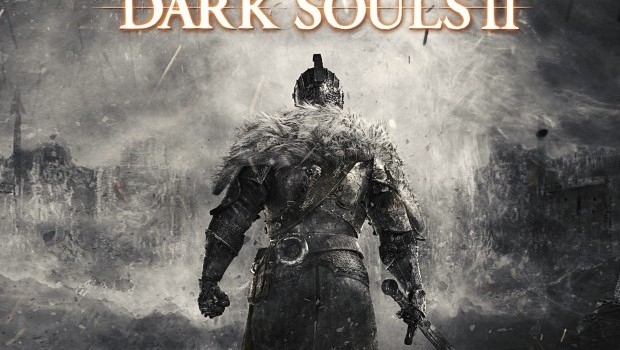 Summary: Offering at least 35 hours of play, Dark Souls II is a challenging experience and a satisfyingly in depth game that rewards perseverance and intelligent tactics.

You haven’t experienced tension in a video game until you’ve slowly inched down a corridor, shield raised and a bounty of souls accrued tenuously in your possession as you peer into the stygian darkness only to be blindsided by an axe wielding undead soldier who promptly buries his weapon into your vertebrae.

Exhaling your pent up breath you watch helplessly as your character crumbles to the floor, leaving behind a glimmering green and red bloodstain that tantalisingly offers the chance to regain all of your lost souls if only you can make it back to the location (Most likely deep in the bowels of a derelict castle) again without succumbing to the same fate, ramping up the tension even more as you cautiously try to regain what was yours mere minutes ago.

Welcome to Dark Souls II… Prepare to die. A lot. 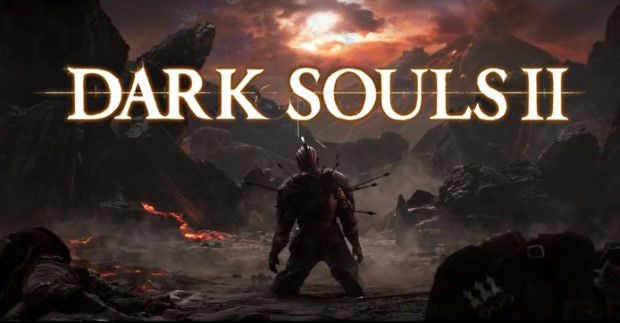 Readers familiar with the previous entries in the Souls series – The original Dark Souls and its spiritual predecessor Demon’s Souls – will already know what to expect from this latest instalment, but the uninitiated need only to know one thing: Dark Souls II will break you. It doesn’t matter how great a gamer you profess to be, Dark Souls II will make you its bitch on so many occasions you may very well need counselling for Post Traumatic Stress… And therein lays the charm of the series.

Dark Souls II is unapologetic in its design, constantly offering up new and initially seemingly insurmountable challenges around each corner. For your first few hours you’ll probably meander through Drangleic via the interconnected paths that branch off from the safe haven of hub town Majula, unaware of where to go next or what to do yet you’ll press on, slowly uncovering new routes and methods of dispatching the numerous enemies that stand in your way until you’re standing face to face with a fallen giant who then proceeds to tear off his arm and bludgeon you with it. 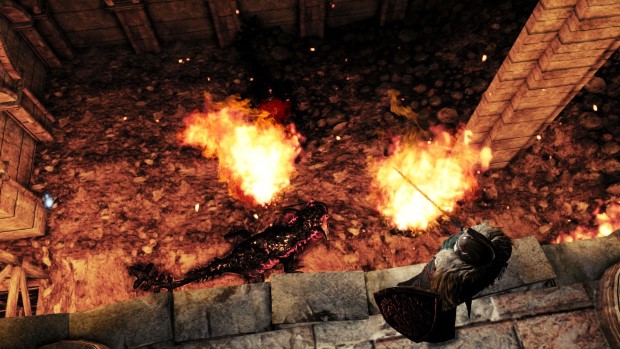 You start the game as a hooded traveller who has been branded as an undead; seeking to lift the curse that plagues you before you succumb completely and become one of the hollow, you’re tasked with collecting as many souls as you can to stave off the effects until you can find and slay four mighty kings of the land of Drangleic.

The story, whilst ostensibly sketched rather thinly, offers little tidbits of information and backstory through conversations with various NPCs, interactions with the environment and through item descriptions; yet, as in previous iterations of the franchise, the story takes a backseat to the main crux of the series: The combat. 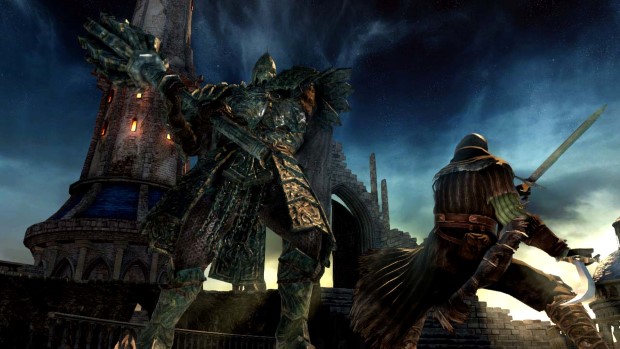 Brutal, exhilarating, frustrating – The combat in Dark Souls II will cause you to run the entire gamut of emotions. Enemy encounters are constant, impeding your progress as you cautiously stalk through new environments in search of bonfires that, when lit, allow you to fast travel between areas at the cost of resetting the enemies in the area.

This mechanic has a cap though; after you’ve defeated a set of enemies ten or so times they’ll disappear completely, making grinding for souls slightly more difficult than in Dark Souls. However, the game also offers an item that’ll respawn all enemies in the environment to its initial state, even reinstating bosses, so, as always, there’s a loophole for those who revel in the punishment the game dishes out. 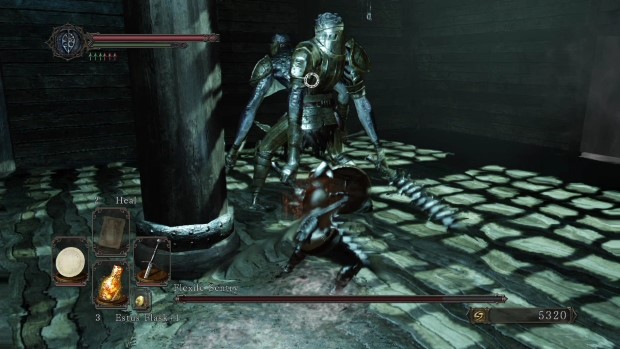 A lot of the exploration and combat in the game boils down to trial and error; you may instantly get hammered by that hulking giant clad in armour upon your first meeting or be caught off guard by a booby trapped chest but once you memorise the locations of certain traps and the attack patterns of the enemies you’ll soon be traipsing through the areas like the true champion you are, smiting all who dare cross your path.

Then you’ll enter the next area and the whole wonderful routine starts all over again. 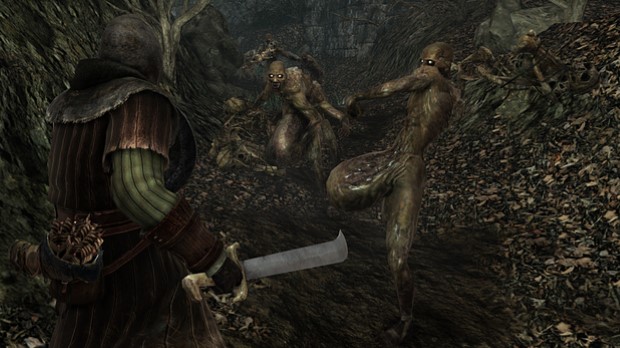 The combat itself feels superb, with the tightly refined controls the most responsive they’ve been in the series. This means that any time you fall prey to an enemies blade the onus is on you for the most part; the game rarely feels cheap or underhanded, although on occasion the targeting can be a little iffy when facing off against multiple enemies. The real key to defeating Dark Souls II is patience and perseverance.

Sure, there’ll be times when you’ll furiously peg your controller at the wall but you’ll take a break, calm down and come back to the game with a clear mind and attempt a new tactical approach, eventually overcoming the obstacle that had you flummoxed for so long and making incremental, but steady, progress in the game. Rushing in unprepared in any area is a sure path to a quick demise, with even the weakest enemies able to quickly overpower the impatient. Managing your stamina is also key, as each roll, block or swing of the sword depletes your stamina bar, ensuring that those who barge in flailing their weapon wildly will soon find themselves left open to attack. 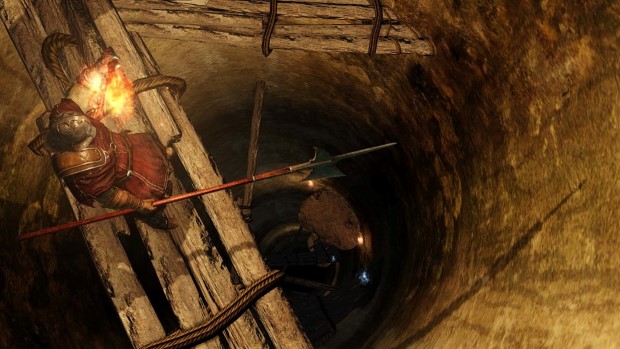 Souls are the main currency of the game and are used to purchase anything from armour upgrades to new weapons and rings with special properties; they’re also used for levelling up, so it pays to return to Majula whenever you get a decent amount and spend them wisely rather than press on and risk losing them all, which is a lesson I was admittedly slow to learn at first, resulting in the loss of many thousands of precious souls.

Although developers From Software have taken great care to retain the game’s punishing difficulty curve, it must be said that Dark Souls II is much more accessible than its predecessor, especially at the beginning. 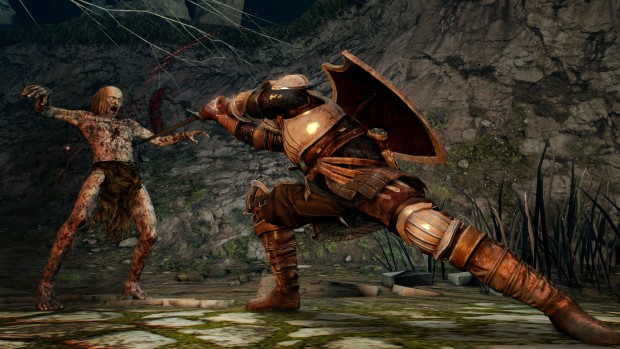 Things soon satisfyingly ramp up and, compared to most mainstream releases, the initial training area still provides a healthy challenge to newcomers, but overall the entire game feels slightly more manageable than the original Dark Souls. Whether or not that’s a good thing will come down to your personal preference.

Dark Souls II offers many different classes of character that players can adapt to fit their personal gaming style, such as ranged combat specialists, magic users, warrior classes and more. The classes are a bit more malleable this time around and careful management of your stats whilst levelling up can result in a well rounded character who can take advantage of the benefits of multiple classes as well as specialists in a particular field. 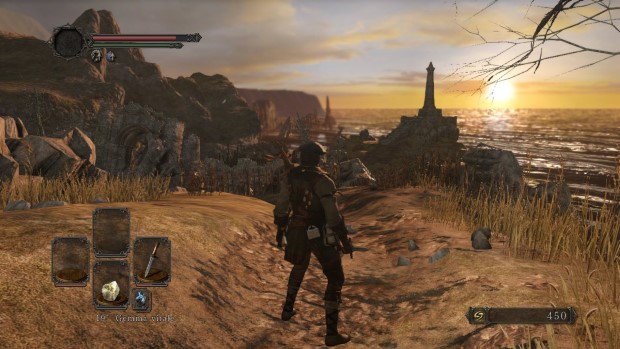 One of the biggest changes this time around is the punishment for death; harking back to Demon’s Souls each death will deduct a small percentage of the player’s health bar until eventually you’re left with only 50% of your starting health.

This has proven to be divisive amongst fans, and newcomers will find it daunting undertaking difficult areas with their health drastically reduced with each fatal error. Using the relatively rare item (Especially early on) Human Effigy will restore ones humanity and health bar but nonetheless this mechanic serves to make particularly difficult areas even more so upon subsequent attempts. 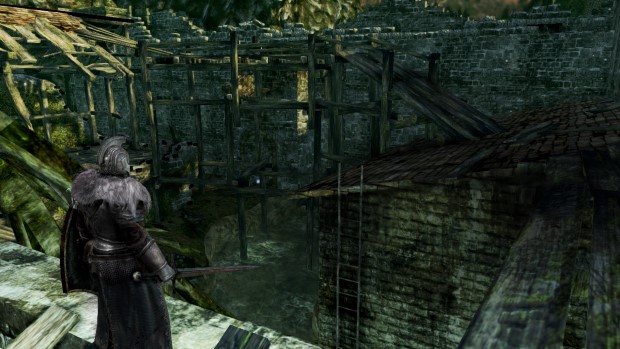 The world of Drangleic is a wonderfully designed, with each area being accessible via a branching selection of tunnels and the like rather than being a truly open world; yet the environment is massive, much more than in the original game, and players will find themselves losing hours exploring every nook and cranny and obtaining the multiple treasures hidden within.

The character design of the bosses aren’t quite up to par with Dark Souls, although there are some truly unique and visually stunning encounters peppered throughout; the main issue is that many boss encounters generally feature some generic faceless hulk clad in armour rather than a lumbering giant or a bipedal ogre. 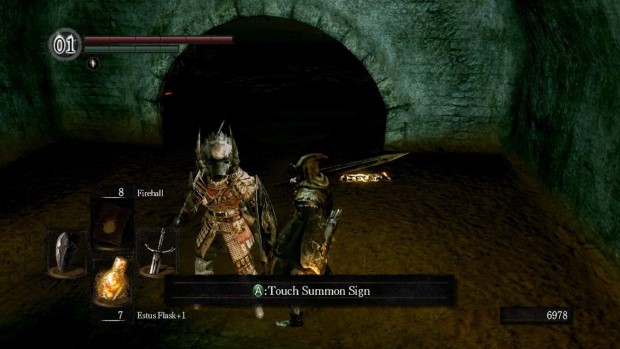 Online play allows you to summon other players to assist with clearing levels or a particularly difficult boss (You can also summon various NPCs offline for assistance) as well as giving players the opportunities to leave messages lying around for other players and bloodstains that, when touched, show other players your final moments.

For the more nefarious among us you can also enter into other players games as a red “invader” phantom, where your only goal is to hunt down and murder the other player; struggling through a difficult area only to get a “You’ve Been Invaded” message has the ability to make your stomach drop like nothing else I’ve experienced in games before. Joining certain covenants also opens up special tasks, like protecting a bell tower from invaders, but I’ve not really delved into these areas as of yet. 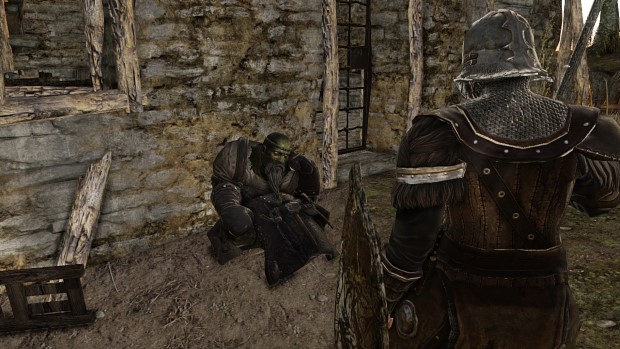 Visually Dark Souls II is a solid game if not an overly beautiful one. The care and effort behind crafting the environment is clearly evident but the game does suffer from some stiff character animations, rough edges and muddy textures. On one occasion during No Man’s Wharf the entire area starting flashing incessantly at me until I died, so there are a few noticeable bugs with the graphics engine but nothing too major, with most of these minor issues allayed by the intelligent and stunning design of the environments themselves and the mitigating factor of being designed for systems that are bordering on being nine years old in terms of architecture.

The much vaunted lighting system ends up being little more than an afterthought, unfortunately, although certain areas take advantage of this mechanic quite admirably, with the light averse denizens of No Man’s Wharf standing out as giant Bat-like creatures react satisfyingly to the flickering glow of the torch and shadows realistically bounce off the surroundings.Yet it’s all just a little flat and not as dynamic as initially expected. 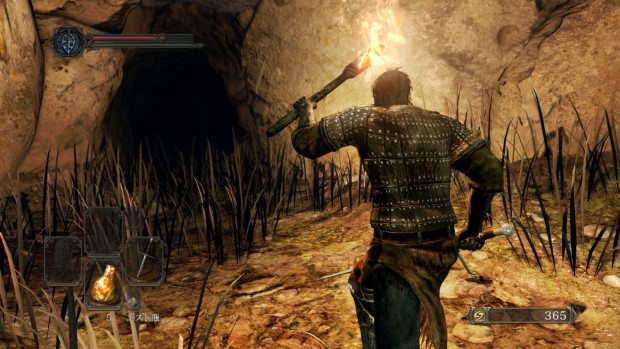 One major improvement due to the refined engine is that there’s no sign of the frame rate issues that plagued Blighttown, which is a massive relief for anyone who had to contend with that stuttering hellhole of a level in the original Dark Souls.

The soundtrack is mostly made up of ambient sounds and serve to immerse you fully into the game, with the hollow clanking of armour echoing off the walls as you make your way down a stony corridor feeling as true to life as possible. On occasion there’s some music, mainly during boss battles, but nothing really all that memorable when compared to contemporaries. 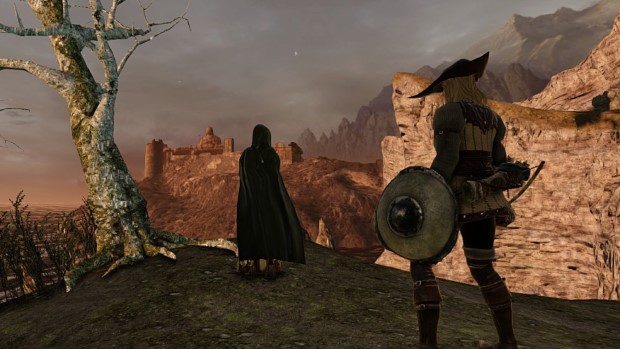 The main thing that Dark Souls II offers that other games don’t is that massive sense of accomplishment you get when clearing a particularly gruelling area. Sure, the game is as difficult as all get out but that’s the essence of the series and is a true rarity in this current age of hand-holding in video games.

Dark Souls II takes the best elements of its predecessor and refines the formula to near perfection; only the occasionally lacklustre boss design and the hub like structure of the world seem like areas which may annoy some players, and personally neither bothered me in the slightest.

Offering at least 35 hours of gameplay, Dark Souls II is a challenging experience with a wonderfully subjective narrative that can be simple or in depth depending on your desire to explore it fully; whilst the difficulty may deter some players, those that stick it out will find a satisfyingly in depth game that rewards perseverance and intelligent tactics

Coming at the end of the PS3 and 360’s lifespan, Dark Souls II serves as a fitting swan song for the last generation of consoles. 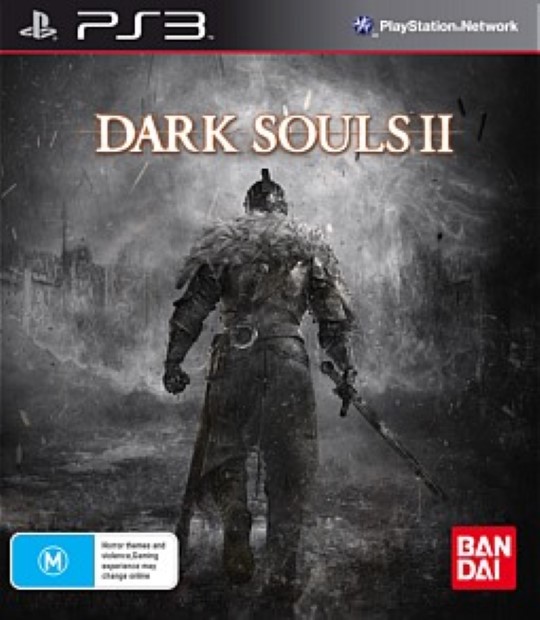