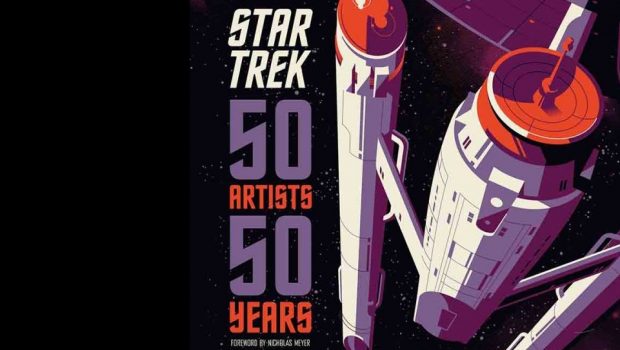 Summary: Star Trek 50 Artists 50 Years is a beautiful book that features some amazing images from this sci-fi franchise!

To coincide with the 50th anniversary of Star Trek and more importantly, the original TV series, this book commissioned by CBS collates some truly stunning imagery from this classic sci-fi universe. However one clever twist about the images contained in Star Trek 50 Artists 50 Years is that these pictures come from a variety of different artistic formats that include posters, comics, photos, sculptures and even textiles. 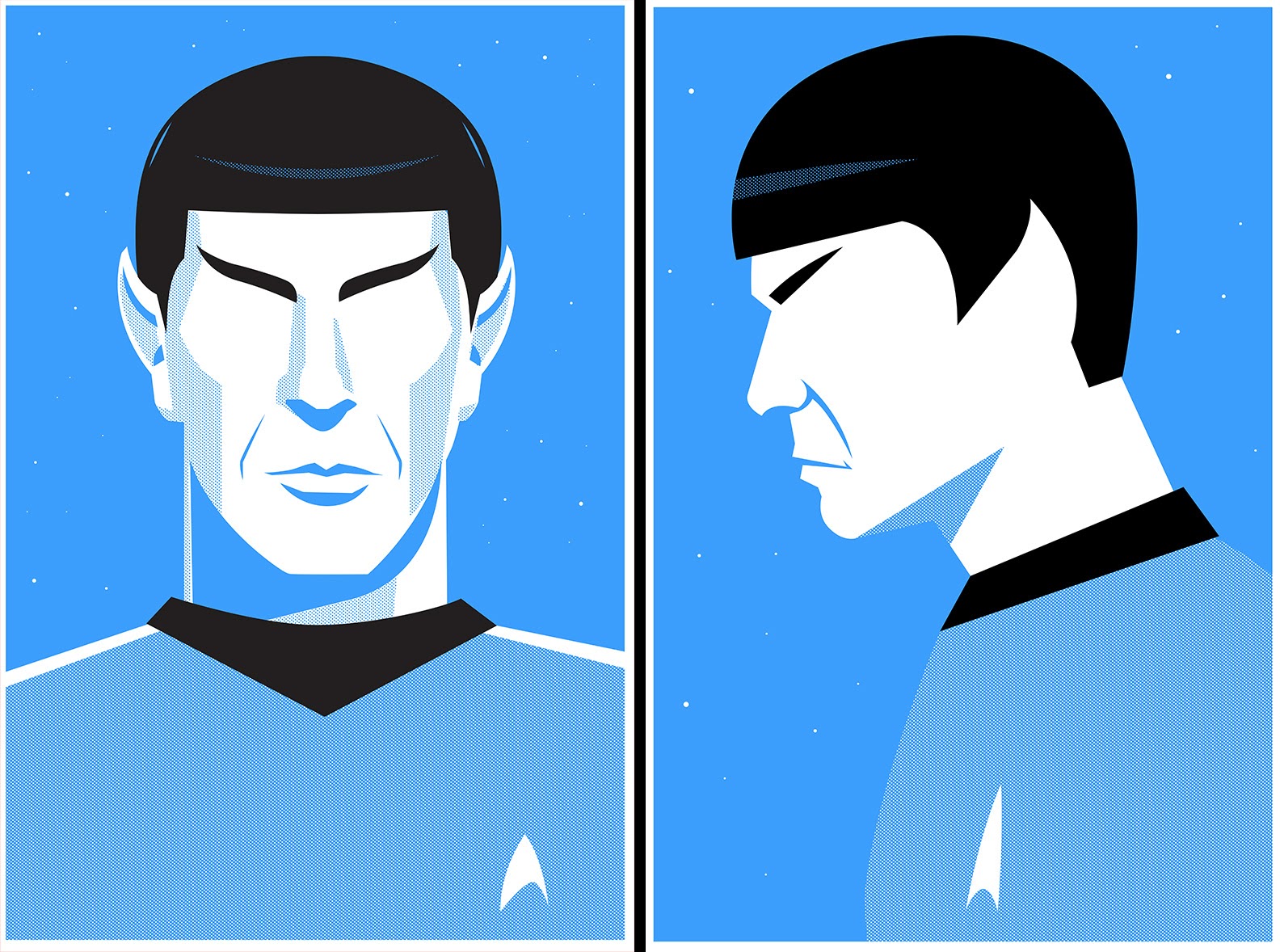 As soon as I turned the first page, I knew that I was in for a visual treat as the first page contained a great comic book inspired image of Captain Kirk, alien worlds and strange monsters from this amazing sci-fi universe which started it all. Given that, every page in Star Trek 50 Artists 50 Years is quite special and seeing the artistic interpretations of the actors who played these characters brought back some fond memories, especially those who are no longer with us. Another feature of this hardcover book is also in its presentation as the images are bright, vibrant and almost jump straight out of the page. 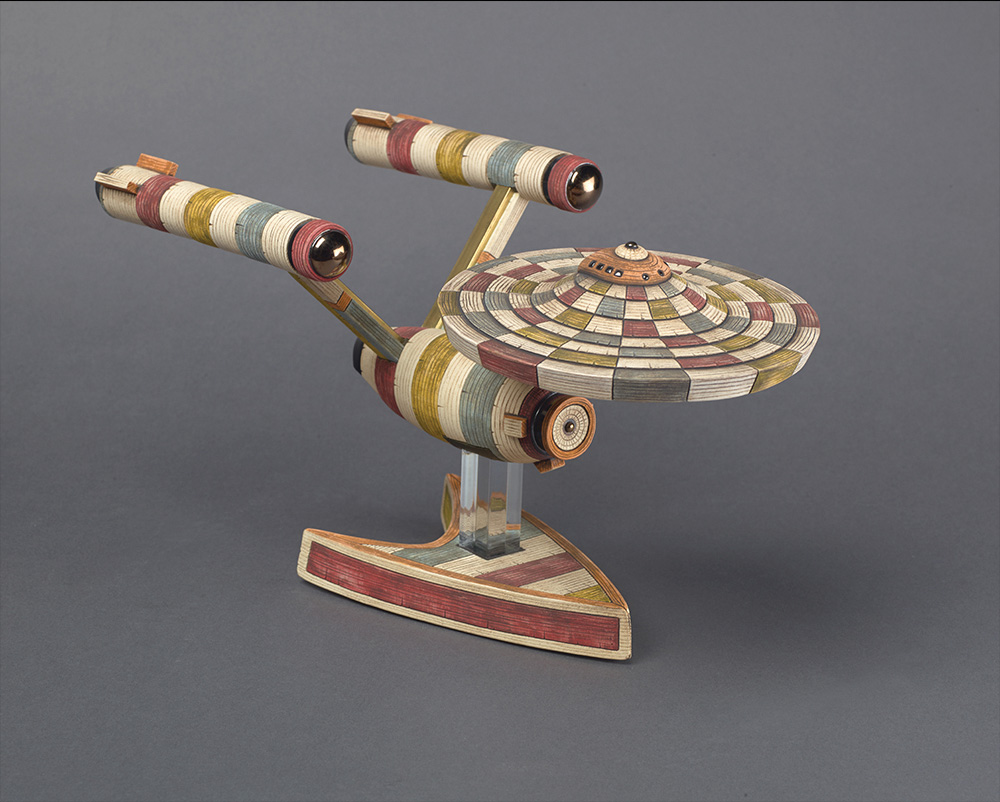 To accompany the pictures, there is a forward by Nicholas Meyer who is an American screenwriter and became involved in the Star Trek mythology with the Wrath of Khan. His forward sets the scene about how images were used in science fiction and how Star Trek inspired people from around the globe, including the imagination of the artists featured in this book such as Stanley Chow, Josh Lane, Dave Merrell or even the U.S. Postal Service who showcased the wonder of Star Trek to its country by featuring the franchise on their stamps. 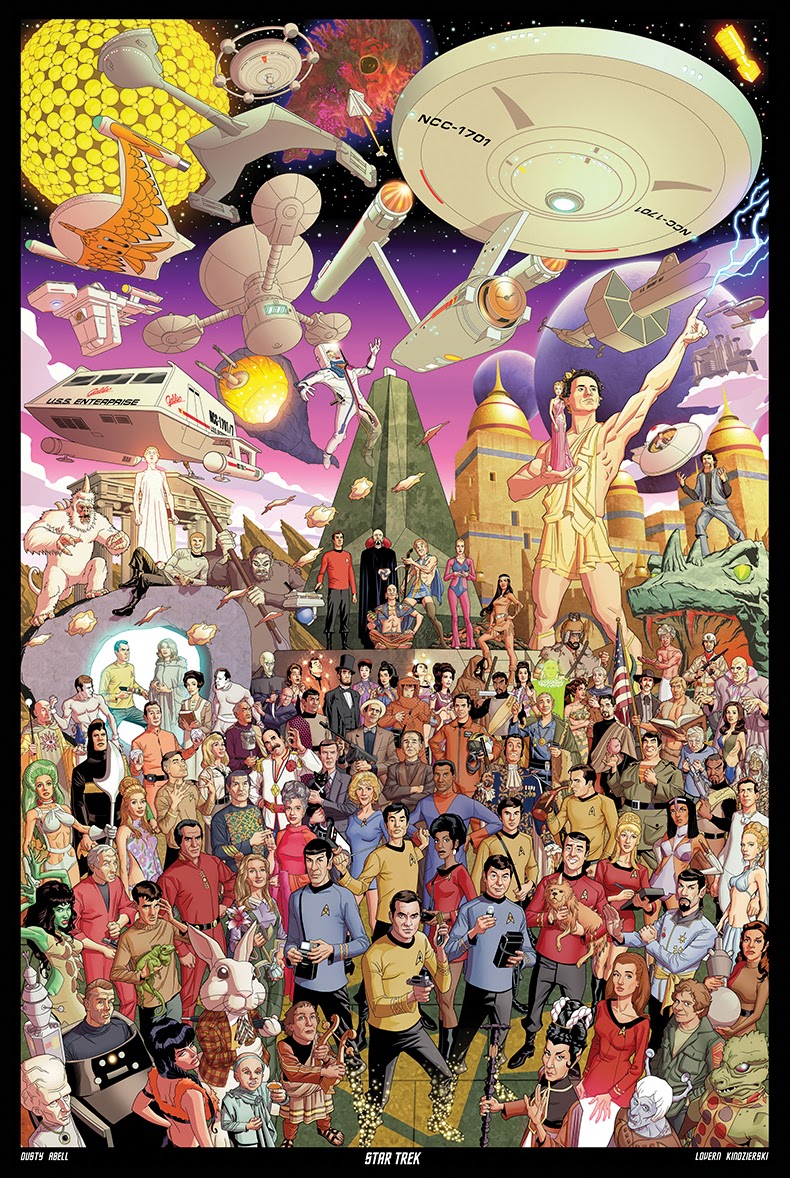 Given the high quality images collected in this book, it’s really hard to find a favourite but my bias of the comic industry does lean me towards the amazing illustrated image by Dusty Abell who successfully captures the original TV series with all the characters he has included plus some of the stranger denizens who appeared in the TV series. Another really impressive aspect about Star Trek 50 Artists 50 Years is each artist is interviewed about their artwork which may include their inspirations, style and other motivations that led them to create these amazing pieces. 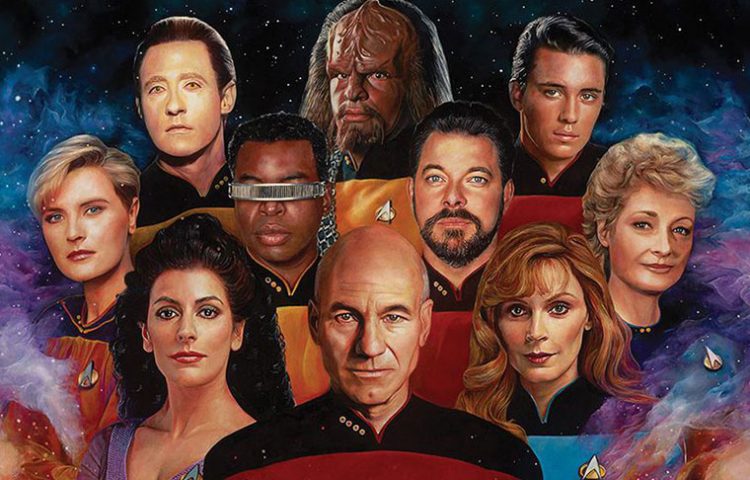 As this is a celebration of Star Trek, the book also includes some truly stunning images from Star Trek The Next Generation with a beautiful oil painting by Nicky Barkla that has Jean-Luc Captain Picard front and centre who is flanked by the rest of his crew such as Commander Riker or Lieutenant Worf. There’s  total of 10 characters included in this piece and I like how Nicky discusses how Stat Trek captured her imagination as a child. She also describes her style as a psychedelic-surrealist artist and if that’s what her artwork is, then I’m a fan. There’s also a fun minimalist piece by Marie Bergeron of the classic battle between Kirk and the green skinned Gorn, a lizard-man alien. It’s another priceless piece in Star Trek 50 Artists 50 Years. 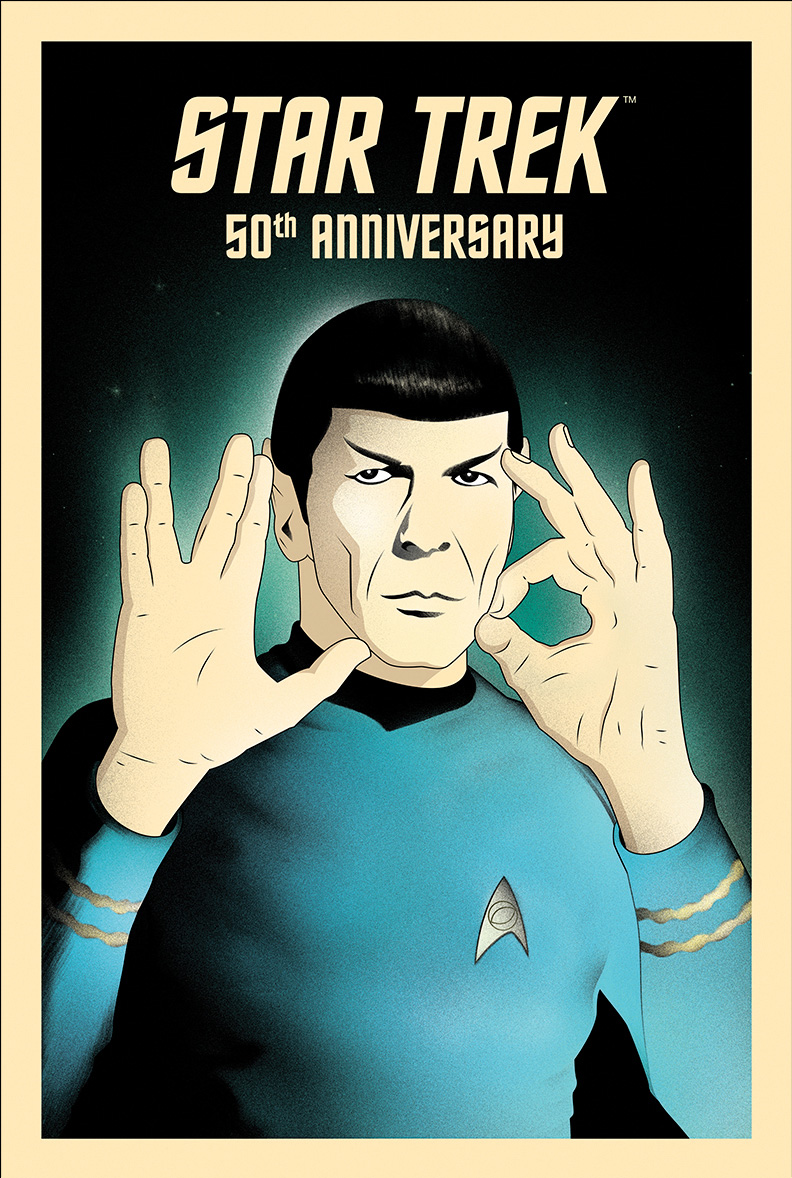 Cosplayers will be pleased with the double spread by actress Mayim Bialik who captures the quirkiness and seriousness behind Star Trek thanks to photographer Christopher Ryan and make-up artist Michael Westmore. Mayim also stars in the hit comedy The Big Bang Theory and discusses what Star Trek means to her. Another ‘favourite’ piece of mine is by Derek Charm called Fifty Aliens and features… well 50 aliens from the series such as the Klingons, Borg and even Quark. It’s a fun piece piece, although I’m not sure where the pink unicorn dog is from? Add in some beautiful illustrations of the late and great Leonard Nimoy and it’s a great homage to the man who played Mr. Spock. 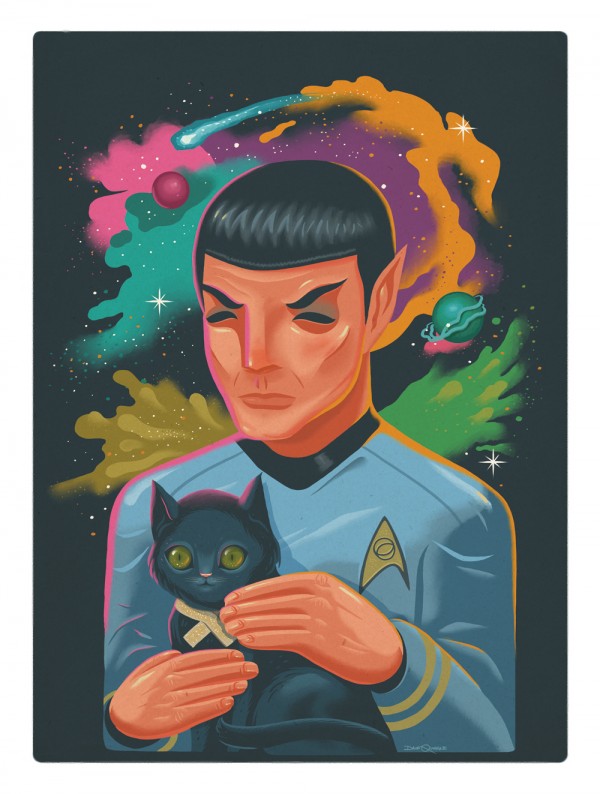 Although Star Trek was quite liberal when it was first released, it was still stuck in the 60’s in some aspects and Star Trek 50 Artists 50 Years highlights the fact that at times, women were a little sexualised in the series like this great poster by Joe Corroney which has the famous green female alien or those classic costumes of yesteryear that is highlighted well by Joe Corroney. Add in a Hot Wheels inspired Borg craft by Neal Smith (Mattel) to even some original photos by Leonard Nimoy himself called Hand in Vulcan Gesture to a strange baby/Vulcan sculpture by Johnson Tsang and this book is perfect in every sense!

If you’re a fan of Star Trek or just artwork in general, then Star Trek 50 Artists 50 Years is the perfect book for you that is filled with some amazing images and information that really highlight the anniversary of this amazing franchise… wow… what a book, it’s truly spectacular! 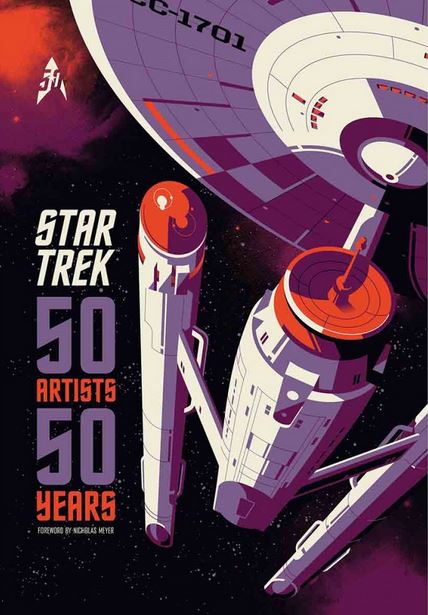 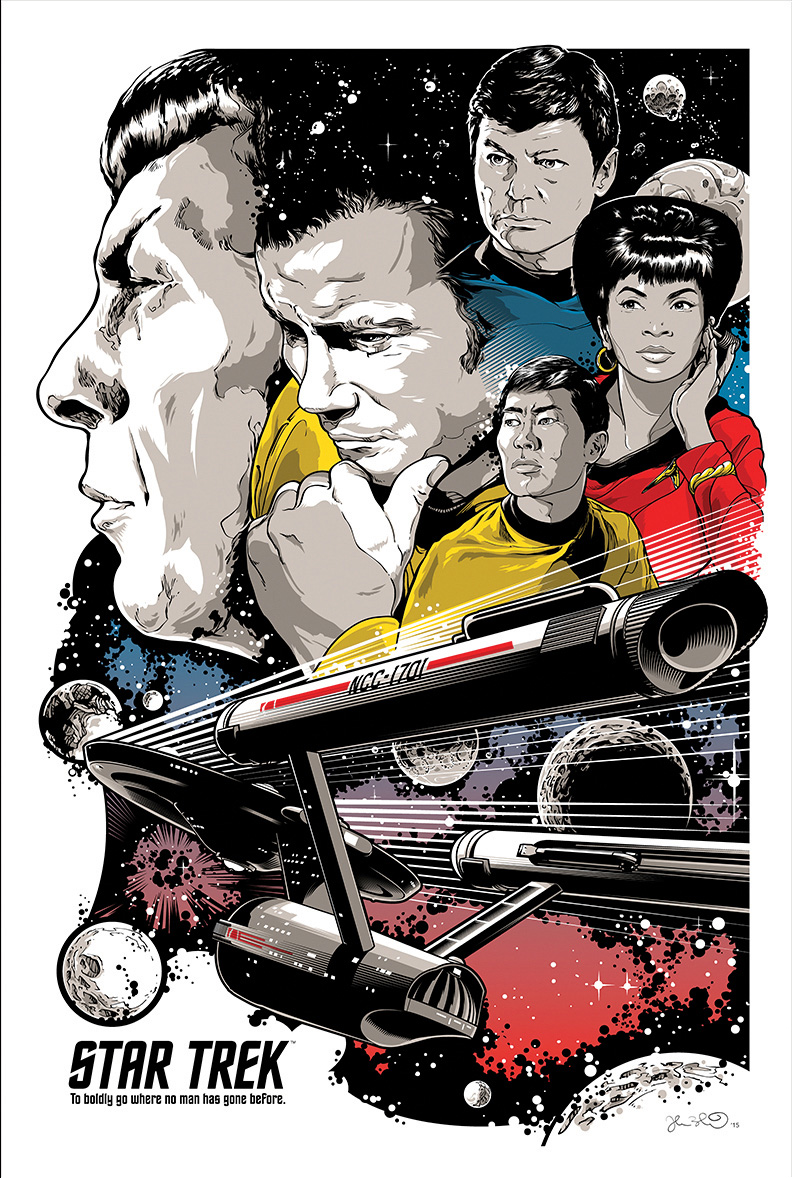 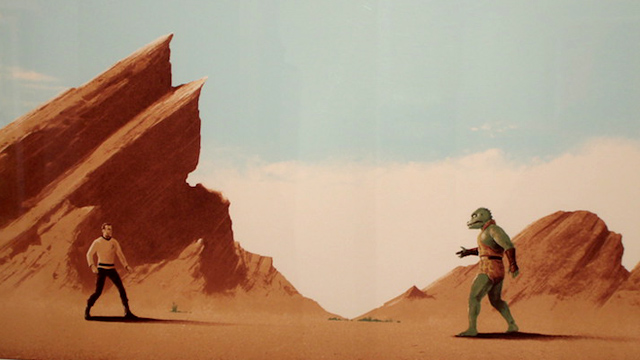