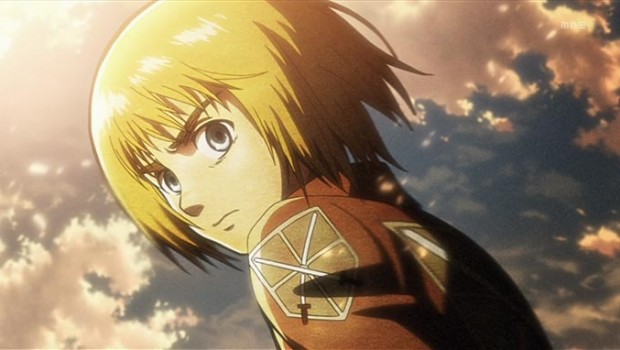 Summary: Attack on Titan Collection Two is one of the greatest anime out there and after all, it wouldn’t be topping charts worldwide if it wasn’t

If you consider yourself a fan of anime, then you have undoubtedly heard of “Attack on Titan”, or in Japanese, “Shingeki no Kyojin”. This anime has topped the anime charts in Japan, America, England, Australia, and almost every country that has a reasonable fan base of Japanese animation. If you are somehow oblivious to the plot of the show, allow me to explain:

The known remainder of the human population resides within three giant walls, the one in the centre being Wall Sina, followed by Wall Rose, and Wall Maria, where one may find the town of Shinganshia, which acts as the original setting for the show. Why does humanity need such protection? To answer that question, I also present the main complication of the series to you; Titans. These named creatures eat humans, and humans alone, but they do not need to eat to survive. If they are attacked, they may regenerate in a few short minutes. These giants usually range from 5 to 20 metres, so they prove no threat to the 45 metre-high wall, right?

No, of course not. If that was true, this anime would have no storyline. 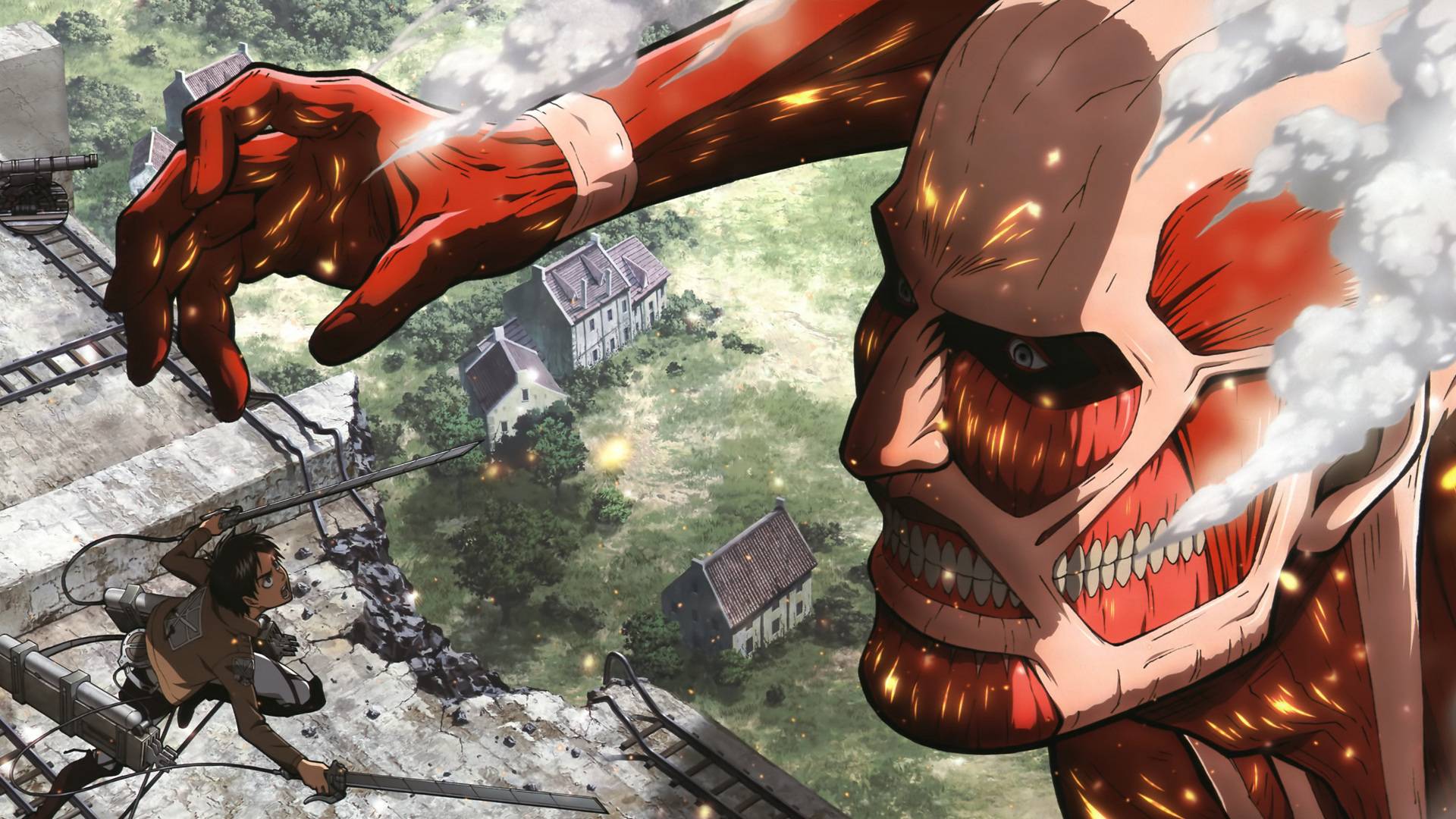 One day, the town of Shiganshina is attacked by a 50 metre Titan, which is nicknamed “The Colossal”, and a Titan who is so strong, not even canon fire may damage it, which is why it is since called “The Armoured”. After this attack, over 60% of the human population were either killed, or were some of the lucky few who were able to retreat to Wall Rose. Three such lucky people were Eren Jaeger, Armin Arlert, and Mikasa Ackerman, who act as the protagonists of the story. After Eren and Mikasa see their mother eaten in front of them, they are determined to become soldiers, and fight the Titans back. As the name “Attack on Titan” suggests, the anime revolves around the 3 teenagers in their adventures as they fight for humanity, even though it is revealed that Eren has the ability to (spoilers); turn into a Titan…?! It is a small amount of time after this point that Collection Two begins.

However, I am not here to spoil the anime. My purpose is to give my honest opinion about it, which is exactly what I plan to do. 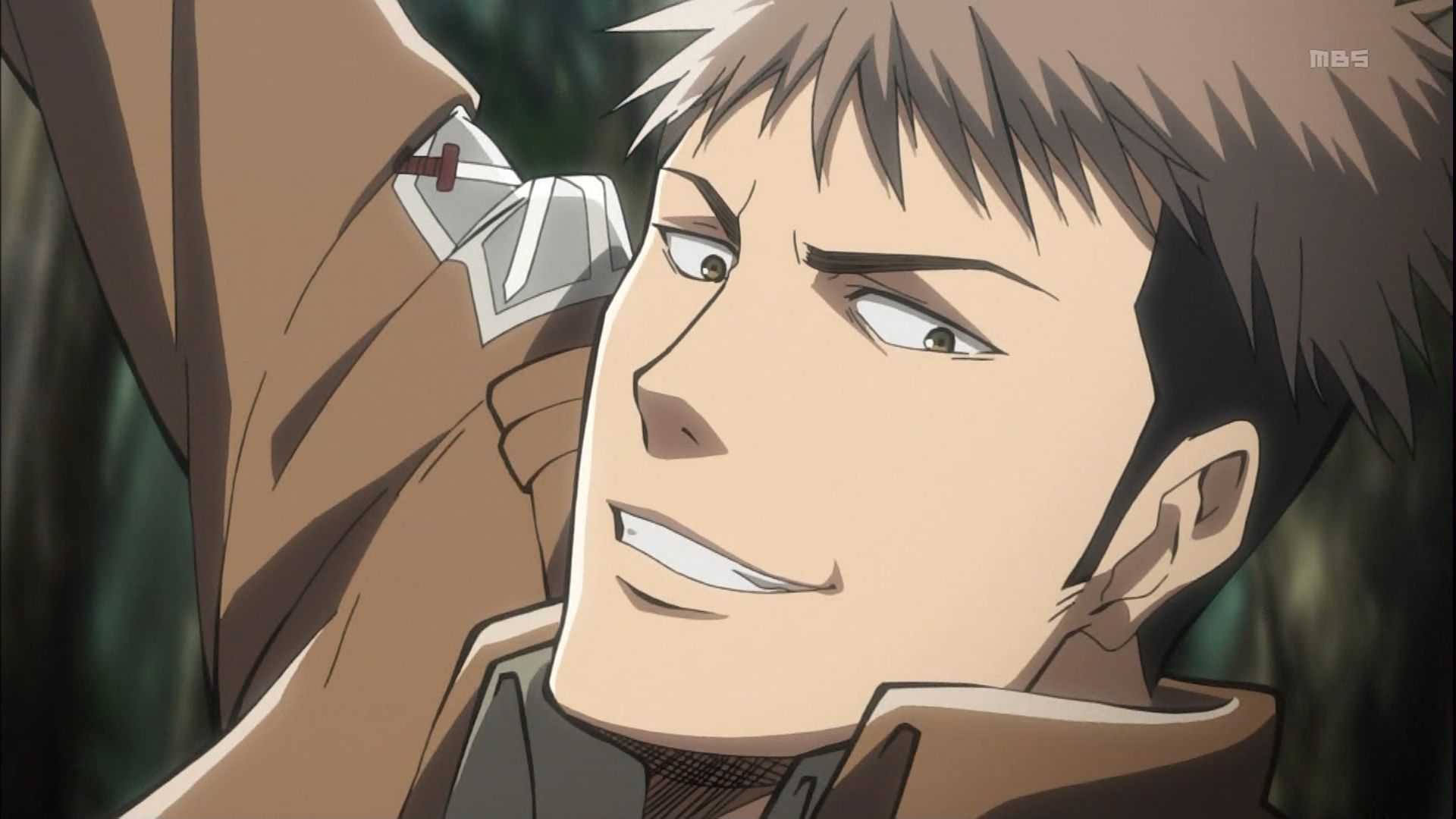 Visually speaking, this anime is no less that brilliant. Not only is the animation smooth in the way it flows, but no detail is lost even in the most discombobulating of scenes. Over 50 people preparing to go out on a mission? They still look great. Unlike most anime, the hair remains plausible colours, and actually obeys the laws of physics, and the eye colours are also realistic. Terror and despair play a tragically beautiful part in this series, as the high-quality facial expressions allow the audience to see these powerful emotions, which seem to always remain on characters faces. Even the scenery, which most people choose to ignore, almost looks real as leaves fall of branches as quickly as soldiers die at the hands (or mouths) of the Titans.

Upon reading that the audio for the anime was going to be unedited, I was almost certain that the English dubbing of the series would turn out catastrophic, like most anime. However, I found myself pleasantly surprised when I took a liking to the audio. The screams sound raw and filled with melancholy, but the greatest moment was when one character, on the verge of death, spoke, and he sounded as if his lungs were filled with blood. Not only is the voice acting brilliant, but the music is as well. The brief moments of silence as a Commander looks down at his murdered squad strikes empathy and grief into the audience, and we are thrown just as off-guard as the characters when the music suddenly escalates in volume, and yet another battle begins. Even the opening and closing themes are good enough to watch at the beginning and end of each episode, which is a very rare declaration indeed. 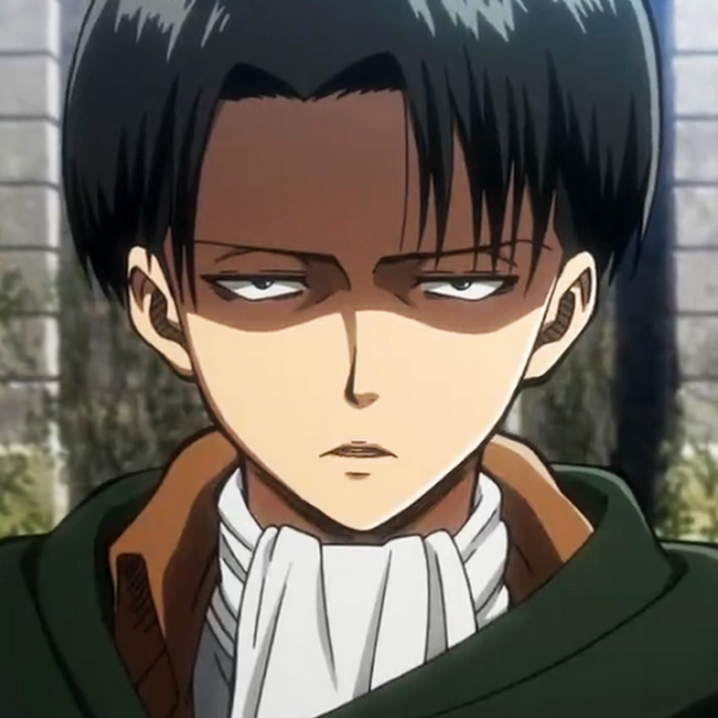 The content of the series is also magnificent, even if you remove the aspect of Titans. The humans in this series are slowly becoming more animalistic than the Titans, however, it is a necessary action for humanity to continue to survive. “To rise above monsters, we have to abandon our humanity.” ‘Attack on Titan” never ceases to fill the audience with some form of sadness in every episode, whether it is from death, or memories of the joyful past. One such moment that I feel the need to highlight is when a main character by the name of Jean is mourning for his best friend, who was killed in battle, and his remains were burned. Whilst staring at the fire, he realises that he is almost certainly going to be killed by a Titan, at which he states; “I just don’t wanna end up a pile of bones no-one knew were mine…” Even as he clutched to a crumbling piece of charred bone, and is sobbing profusely, he finds the strength to mutter something in between sobs. “I’m sorry… I don’t even know which of these bones are yours anymore…”

However, I am sad to announce that most of these heart-breaking moments are not as plentiful as they could be. The audience watches as thousands of soldiers die… But in the series of 25 episodes, only one important character was lost. Even so, his death was not shown, and no character was there to witness him die “He died alone”, and he only had a very small amount of screen time before his death. In reality, more time was spent in mourning his death or recalling memories of him, which I find inevitably disappointing. The anime uses the same trick too many times; pushing characters to the brink of death, only to pull them back into the safety of the walls.

Before I conclude, I find the need to point out what is by far the most disappointing thing about “Attack on Titan”, which has bothered me to such an extent that it gets its own paragraph. 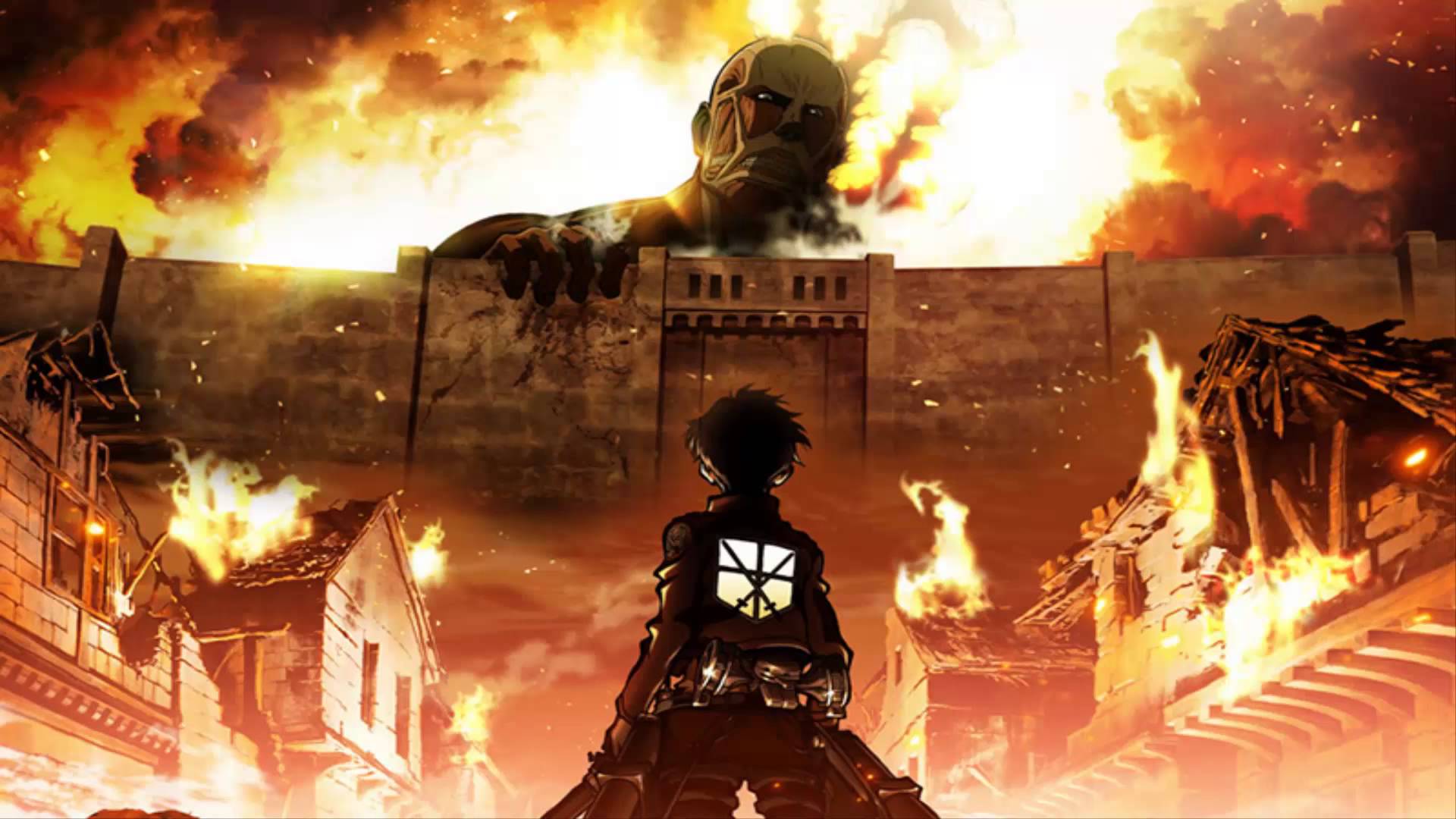 Normally, I would welcome such a thing in an anime so filled with regret and death… But the series fails to remove the feeling of hopelessness before trying to create humour. Even as the protagonist is racing to escape death, the characters begin to discuss how embarrassing it would be if one of them were to urinate in their pants. Only minutes later, all of the characters besides the protagonist were dead, leaving some of their final words to be useless humour. It is almost always out of place, and failed to make me laugh. In fact, the only thing that these useless attempts at humour succeeded at was highlighting the despair of the series, and I was reminded that the smiles on the characters faces would only stay on there for a few more seconds.

To conclude my review, I will remind everyone that, despite the out of place humour and lack of meaningful deaths… This series remains to be one of the greatest out there, after all, it wouldn’t be topping charts worldwide if it wasn’t. The storyline, audio and visuals of the series remain perfect… That is why I am giving this series a well-deserved 4.65 out of five, as well as one of my personal recommendations. 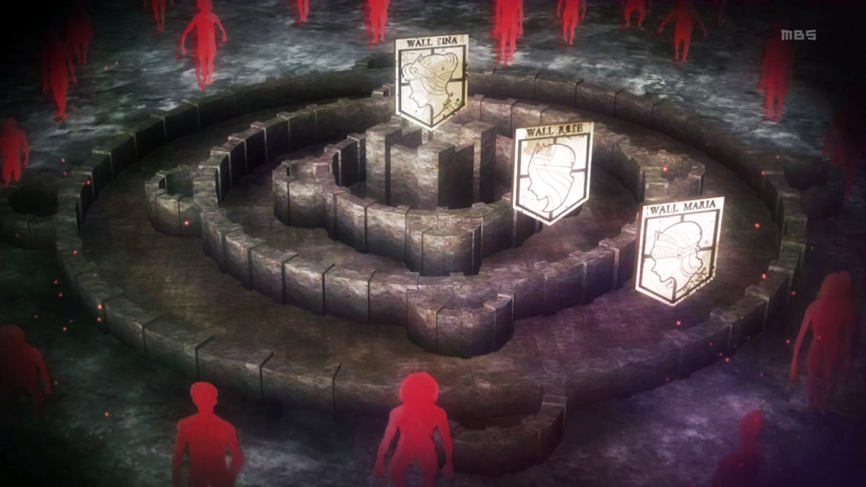