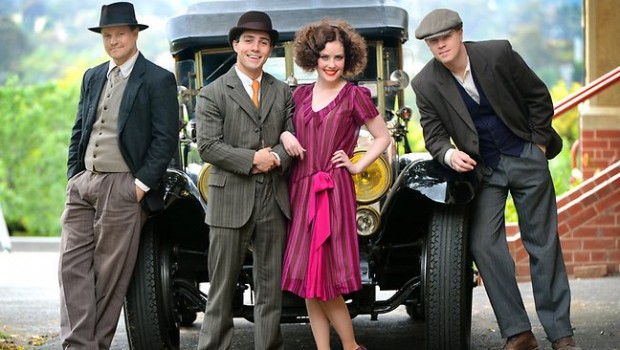 The Underbelly phenomenon continues and gives the criminal underworld a glitzy makeover that glamorises the men and women involved. Money? Gorgeous Women? Sex? Power? Apparently that’s what you get when you’re a clever criminal. Unlike previous instalments, Underbelly Squizzy is set in the 1920’s and revolves around a Melbourne gangster named Leslie “Squizzy” Taylor (Jared Daperis) who almost held Melbourne at ransom by his deadly crime spree. This is the story of Squizzy from beginning to finish that takes the viewer on his sordid journey.

Joining newcomer Jared Daperis is Dayn Wylie who plays Detective Frederick Piggot, the polar opposite of our gangster plus a wealth of love interests for Squizzy such as Camile Keenan (Dolly Grey) his first love and Elise Jansen (Lorna Kelly), an innocent waitress who falls for his charms. Like the other stories from the Underbelly franchise, nudity and sex play a key component to install a type of titillation to the shock factor of the criminal characters. Unfortunately it’s being overused and the creators of Underbelly need to try a different angle.

The biggest issue I had with Squizzy was the artsy almost Baz Luhrmann (The Great Gatsby) type atmosphere to the camera work, especially with the use of freeze frames and captions that actually felt a tad childish. Another glaring problem was the acting which did seem too forced and contrived, especially the main character himself who was very difficult to relate with. At some stages in the episodes, the dialogue was almost laughable, especially near the near the end. Something just felt off from the get go.

The DVD quality is exceptional for Squizzy but due to the glitzy nature of the production, it does look like it was filmed today opposed to the BBC series Ripper which does a great job at recreating 19th century England. Nonetheless, it boasts sharp images, vibrant colours and no errors whatsoever. Audio is equally as impressive thanks to the Dolby Digital 5.1 presentation.