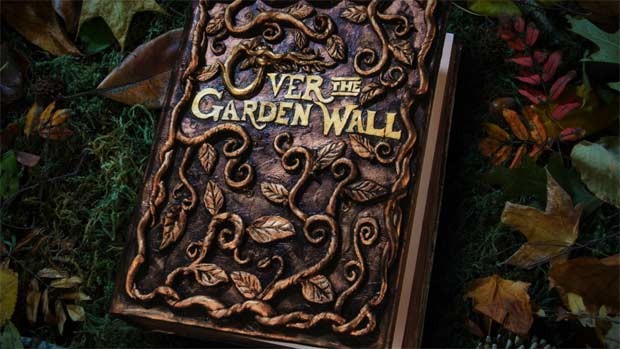 Over the Garden Wall DVD Review

Summary: At the end of the day, I really and thoroughly enjoyed Over the Garden Wall that successfully created a modern fairy-tale with likeable and very memorable characters.

Over the Garden Wall is a delightful story from the Cartoon Network that channels its inner Grimm Brothers fairy-tale as it follows two brothers by the names of Wirt (Elijah Wood) and Greg (Collin Dean) who find themselves in a magical place known as The Unknown. Within The Unknown, forgotten stories of yesteryear and myth are contained and when the brothers find themselves lost in this dark fairy-tale, they meet two characters that may hold the key to freedom. Also, both the brothers are quite difference with Wirt being the older two of the siblings and the more cynical but overall, Over the Garden Wall is a coming of age story set in a fantastical world. As the story unfolds and thanks to (John Cleese), a crazy millionaire, Wirt and Greg are introduced to a crazy Woodsman (Christopher Lloyd) and a foul-tempered little bluebird called Beatrice (Melanie Lynskey) who become the boys companions through The Unknown. Unfortunately for the brothers, not everything is what it seems in The Unknown, especially when they cross paths with The Beast (Samuel Ramey) but without spoiling the story, it’s a very interesting adventure that is filled with wonder, the stuff from nightmares and an incredible revelation as secrets are unlocked in this storybook come to life. Unlike other releases from The Cartoon Network, Over the Garden Wall has some very unusual yet aesthetically pleasing animation that is quite stylised and definitely suits the story perfectly. It’s like an old painting come to life and I love the earthy shades employed by its creators that when mixed with colour, creates this amazing fantasy world and really pays homage to the stories of the Brothers Grimm. With that said, the stories are a little dark but what Brothers Grimm fairy-tale wasn’t and it’s creator Patrick McHale succeeds at creating a modern fairy-tale with some exceptional voice actors involved that is engaging from start to finish. Furthermore, the voice actors of Over the Garden Wall are amazing and include Elijay Wood, Collin Dean, John Cleese, Christopher Lloyd and Samuel Ramey who really create this unique, interesting and at times scary characters that works hand in hand with this modern fairy-tale approach. However the standout voice actors of Over the Garden Wall is definitely Melanie Lynskey as this witty and sarcastic character plus Christopher Lloyd as this rambling crazed woodman that would fit perfectly into any Brothers Grimm fairy-tale. To assist with the story and the excellent voice acting, the musical score of this release is quite beautiful and haunting with a touch of melancholy thrown into the mix and when combined with the animation techniques, it’s definitely modern art. At the end of the day, I really and thoroughly enjoyed Over the Garden Wall that successfully created a modern fairy-tale with likeable and very memorable characters. The stories were not only magical but were also cleverly written and there’s quite a few twists and turns plus secrets along the way. Kudos to the voice actors who brought these characters to life, especially the great animation which easily makes this one of my favourite animation stories of 2015.