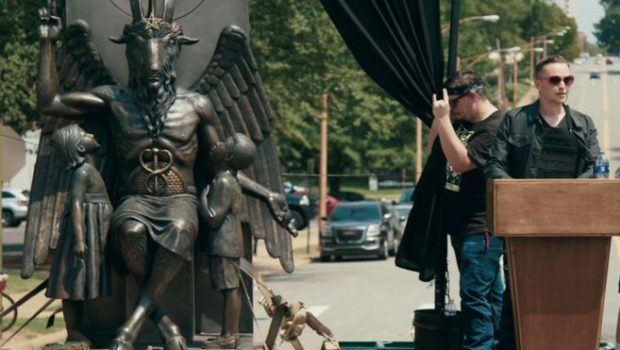 Summary: Hail Satan? will rock your beliefs about the Church of Satan. Its members are a colourful and funny bunch of misfits who may convince you to convert… provided you don’t offend too easily.

Imagine a group of Satanists. Devil horns, fire and lots of black clothing are obvious choices, but chances are you didn’t consider individuals poking fun at themselves. The documentary, “Hail Satan?” proves that the latter scenario is actually true. It may be a revelation, but these men and women of darkness who worship at the altar of the devil–have wonderful senses of humour. “Hail Satan?” challenges your pre-conceived notions and proves to be one provocative and illuminating film.

This documentary is directed by Penny Lane, who is no stranger to capturing the weird and wonderful. One of her previous films looked into an unorthodox treatment for impotence. For “Hail Satan?” she examines the Church of Satan, an institution consisting of some rag-tag misfits who believe in humanist ideals and participating in civic duties (like picking up litter).

Religion often has some murky elements and Satanism is no exception. There are talking head interviews where the members describe their beliefs, but occasionally they contradict each other. Perhaps the biggest thing for this group is their steadfast determination to keep the church separate from state affairs, as well as their love of a good prank. A perfect example explored here is their battles against Christian monuments being erected on state property. Their solution was to propose a large demonic statue as – quite possibly – the coolest right of reply. This story is very engaging because it shows a group of non-conforming, free-thinkers who challenge authority with pitchforks. They believe that the pervasiveness of Christianity in America is problematic. At times it feels like this film is mining similar territory to Andrew Denton’s “God on My Side” because it is a sobering look at where Christianity poses challenges. At other moments however, this group act like trolls and perform stunts not dissimilar to an irreverent John Safran or Chaser sketch.

Audiences who are easily offended may not enjoy this documentary. There is nudity in it. There are scenes where the group engage in performance art, which fetishes abortion. While Lane takes a positive and respectful view of their religion, some of the Satanists are outspoken in their disdain for Christianity. While they argue for religious freedom, some viewers may find the group are dancing with the devil and flirting with blasphemy.

This film isn’t a balanced one. The majority of the voices featured here are active members of the Church, including leader Lucien Greaves. A scholar named Jesper Aagaard Petersen offers up some context to the church. There are also archive videos and newsreels used to support the storytelling. The Satanists believe that the magnitude of Christianity’s influence is frightening, yet the Christians don’t really get the chance to have their own say.

“Hail Satan?” is a smart and seductive documentary about a group of radical provocateurs. Like any good film, it elicits reactions from audiences, and whether that be good, bad or ugly depends on your own beliefs. “Hail Satan?” makes some compelling arguments for the Church of Satan and may even convince some people to go for their own dance with the devil. 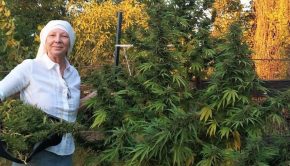