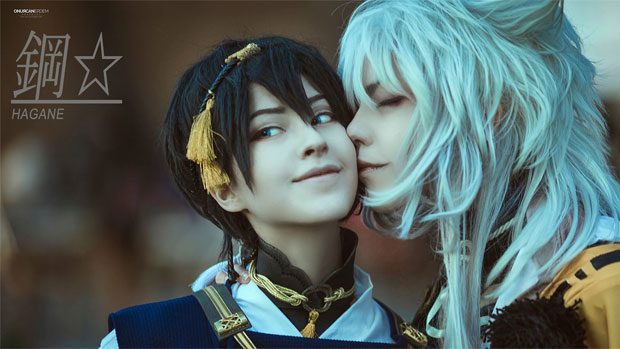 We catch-up with two cosplayers from Turkey, Deniz Kanmaz (Setsuna) and Miray Songün (Mirai) to discuss their passion and their dream characters.
Tell us how you both became involved in cosplay?

Deniz: For me, it was a bit funny. I found out about the conventions in my city 6 years ago, from a couple of kids from our school and said “Why not give it a try?” The idea to gather up a costume for a character I really liked, seemed very exciting. After going to one event, I just couldn’t stop.

Mirai: Oh well, I was kind of trying to be one of the cool kids in my high school. Hanging out with them and all, out of the classes… and I was already watching animes and TV shows, playing games in my free time so when they dragged me to a cosplay party (which was the first cosplay event in my city), I was half running there. I don’t know if this counts but I was sewing the clothes I saw in shows too – taking a lot of help from my grandmother – Just not going at full power to copy them one on one. Deniz: I usually get my inspirations from the characters of the series I like. If I feel close to a character, or just simply admire their depth, I feel the need to act them out. Though sometimes, just seeing a beautiful design or artwork and thinking about how i could improve it and make it come to life is enough for me to get inspired.

Mirai: It’s all about imagination for me. Yeah I do like representing the best features of the clothes the character I cosplay wore; yet what I am in love with is how to make it more ‘’alive’’. Adding extra pieces, playing with patterns and fabrics. I want to people to say ‘Yeah, if this character existed in our realm, they would exactly look like this!!’ This is the thing that pushes me forward. I want to see the character I cosplay when I look at the mirror instead of a cheap carbon copy. I watch the series, read books about the time/place they live in, make some research till I feel myself adequate enough to work on the costume I plan to start. Then I go. What’s been your favourite cosplay character so far?

Deniz: So far, I’ve had the most fun with either goofy or “fabulous” sorts of characters. So I’d have to say France from Hetalia or Pokémon Go’s Instinct team leader Spark. I could really live the characters and have a lot of fun at the cons. Costume-wise, I’d say Mikazuki from Touken Ranbu.

Mirai: I think it was Prussia from Axis Powers Hetalia. Both costume and persona was amazing to go along with that I had a blitz when I was yelling around, threatening people at the party with invading their ‘vital regions’ . The thing I like about cosplaying is; it gives you an amazing chance to be free for a whole day. You can be anyone, anything you want! You can walk in someone else’s shoes for a whole day, think about their responsibilities, their lives, their powers. Or you can just yell around with some prop in your hand and have fun! If you had unlimited time and money, which cosplay would you create?

Deniz: I think Suiren from Adekan or Ashura from Tsubasa Reservoir Chronicle. Maybe a character from Scissors Crown? None of these actually require unlimited time and money but they are some of the beautiful costumes at the top of my list.

Mirai: Well… Something with amazing prop and mechanics I think.. I’d go with Kayle from League of Legends or Black Gold Saw-Insane- from Black Rock Shooter. I really like Imanotsurugi’s Kiwame version too!! And I was planning on cosplaying as Seth Knightroad and Cain Knightroad with their Crusnik clad for a long while now from Trinity Blood. God I HAVE SO MANY PLANS THAT I DON’T KNOW! Hahahahha! What’s been the hardest costume to make?

Deniz: The hardest one is actually the latest costume we’ve made. We haven’t posted photos yet but Angela from the Wolfteam Reboot took so much effort I just wanted to give up mid-way. Her bodysuit had so many pieces I couldn’t solve and I ended up leaving most of the sewing to Mirai while I crafted the leg armor. We had two weeks until the tournament when we started and I had only one night and a day to finish all her crafts. Many of our costumes look more complicated than this one but they were all much simpler.

Mirai: A good question. It was a commission for a photoshoot I was hired to. A Korean game company which was focusing on mostly mobile games back then hired me for cosplaying as one of their new closed beta characters named ‘Leila’. Just the corset itself had more than 27 pieces. And I am not even talking about the bodysuit here. Halftime of the sewing I was crying and I had two weeks as a dead line. I was literally dead by the end of the said date. Lost 7 kilos, couldn’t take a whole nights sleep. Tell us your favourite cosplay moment?

Deniz: Mine is a little lame actually hahaha. We were attending a convention in another city for the first time and I was really nervous because we didn’t know anybody there. Then while at the dressing room, two girls came up to us an one started crying all of a sudden. They said they were our fans and that they wanted us to sign their notebooks. I had never been happier in my life. To see that someone had been so touched from our work and that someone appreciated it enough to want me to sign anything… I was so touched. It was the first time someone asked that from me. Then she asked for a hug and my eyes started tearing up. I don’t think I’ll ever forget that moment.

Mirai: What Deniz’s said. I WAS GOING TO CRY, I HAD TO HIDE MY FACE IN THE SINK AND WASH MY FACE! I don’t know how to react when something like this happens! I feel really embarrassed that I start mumbling about how the costume and my face was disgusting and how I should be drowning myself in a draw than making humanity face it everyday. And in fact anytime someone calls me by the name of the character I cosplayed with roleplaying their own character. As an example, think of a Roxy Lalonde who’s waving you a vodka bottle and winking while calling your character’s name –I was Jake English back then- and beckoning you with a finger. I really live for these moments! They call you by the character you impersonate. It means you’re successful! So why not reply with rp’ing back and shoot them a wink? See the character! Feel the character! BE THE CHARACTER!! Besides cosplay, what else do you get up?

Deniz: We both like drawing a lot, even though our styles are quite different. It’s really fun to just give a break to the costumes sometimes and draw silly things with Mirai. Other than that, I can say that music is a great passion of mine. Since I was a little kid, I’ve always loved listening to music and singing. It soothes me whenever I’m feeling down.

Mirai: I like watching movies a lot and not caring the genre they are in. Like.. I love watching adventure movies. And romantic comedies with fantasy movies too… it doesn’t matter as long as there’s effort in it, I like it. And reading books is a must for me if I have some free time. It helps me a lot to clear my head. I like designing some small accessories and I LOVE GOING OUT AND BUYING SOME SHOES. I MEAN. I HAVE MORE THAN 50 PAIRS NOW AND I DON’T KNOW WHERE TO STACK THEM ANYMORE. I NEED HELP. Deniz: YaoiCon for obvious reasons ( ͡° ͜ʖ ͡°). We hardly see our favourite couples cosplayed in our conventions. It’s such a shame. Conventions with huge beautiful costumes are awesome, but I enjoy ones where everyone just roleplays and goofs around instead. For me, that should be what cosplay is all about.

Mirai: YaoiCon it is. If not, Then BlizzCon. Armors. Too many detailed costumes. Shiny…

Deniz: Personally, as an older sibling, the first thing that came to my mind was my little brother. I get to dress him up in funny outfits and he always goes along with it. He’s quite a dork. As an object, I actually still own a teddy bear I’ve had since I was four. I don’t sleep with it anymore (haha) but I think it’s pretty nostalgic and cool to keep it after all those years.

Mirai: I am too an older sibling and when I think of my own brother, I cringe. Shots fired! Hahahaha but no really; I really adore my baby sister and my brother, those silly things are everything to me. Other than that, Deniz is the reason I wake up in the morning and keep on fighting. I have a couple of books that are first copy, like.. left from 1920’s and all? I cherish them all with my life. Like, the first Turkish copy of Moulin Rouge. Lastly, what other characters will you play in the future?

Deniz: Well, I’ve started on Tracer’s costume from Overwatch and am planning a photoshoot for Vladimir from League of Legends soon. Since our plans are usually made two days before cons, we tend to make a lot of last minute decisions.

Mirai: Feferi Peixes from Homestuck in mermaid clad as a photoshoot –I might pull Condescension to a closer date too if our group decides to gather together in short time since I’m halfway the costume- and Mercy from Overwatch.

Follow these two amazing cosplayers on Facebook at https://www.facebook.com/haganecosplay/ or you can reach Mirai at instagram.com/heiwajima_miru and Setsuna at http://instagram.com/ahonodenkun plus their members at http://worldcosplay.net/member/128719