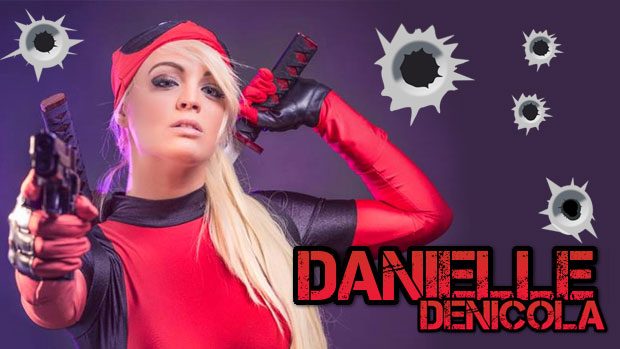 Impulse Gamer caught up with US cosplayer Danielle DeNicola (the cosplayer formerly known as Ellei Marie) about gaming, cosplay and lots of cool pop culture talk!

You describe yourself as a creative girl who loves video games. So tell us, which video game got you hooked?

Halo! It’s the first game I remember playing on the original Xbox as a kid, so fast forward 10 years and now I own an Xbox One with just Halo 5 and the Master Chief Collection because… what other games do you really need? I don’t want to spoil anything for anyone, so I’m going to be as politically correct as I can here.. My favorite video game memory is the beautiful story-line of the entire StarCraft series, but most importantly the comeback of the Queen of Blades. I love Kerrigan, she’s one of my favorite female characters!

As a gamer, what are you most looking forward to with VR?

Pokemon! I want to REALLY catch them all!!

Are you a Microsoft or Sony girl?

Well I already kind of answered that question with all the Halo talk but I’ve been swayed to be a Microsoft girl. Although I can appreciate Sony (mostly because of God of War, Kingdom Hearts, and the PS2) but I’ll always have one true love in Halo and that’s where I’ll stay :p

Cosplay started for me in 2014 when my friend and League of Legends bot lane partner convinced me to come with her to a convention in our area. She made me a costume and everything! I was too shy to do it on my own so if she hadn’t pushed me I would never have found a hobby I love so much. What’s been your favorite character that you’ve cosplayed?

Yang from RWBY :) I relate to her more than any other character in the nerd universe.

My female Thresh from League of Legends so far has been the hardest. It took around 8 months of on and off motivation and telling myself it was worth it hahah. Valla from Diablo/Heroes of the Storm. A badass lady and an amazing costume. You’ve played a variety of characters like Baby Doll, Black Cat, Lady Dead Pool, Tinkerbell and even Kasumi from Dead or Alive… when you cosplay these characters, do you channel their personality? So what we’re trying to say, do you feel badass when your work finally pays off and you look in the mirror and say wow?

Definitely! I come out of my shell when I cosplay, especially empowering women or badass genderbends (which most of my costumes are). I’m the epitome of socially awkward nerd and IRL I constantly instigate uncomfortable conversation hahaha. When I cosplay I get to pretend I’m a confident, powerful superhero/fighter/etc., and it forces me out of my shell. Being a model, do you think that helps with your cosplay? When I cosplayed Kim Possible for the first time I didn’t realize I would be right across the hall from Christy Carlson Romano (the voice of KP). She came over to my table and complimented my cosplay, signed my Kimmunicator and a poster and then later shared my costume on her Facebook. It was more awesome than funny but that’s forever one of my con highlights, and it was a total accident!

What do you love about cons?

My favorite thing about conventions is the camaraderie between similar personality types that are usually too shy to mingle the way they do at cons. I know the shy thing all too well but for some reason I always feel comfortable and at home among my fellow nerd/weirdos/outcasts, and I say that with the most endearment I can. The environment is just so warm and welcoming, and that’s my favorite part. Is there anything to despise?

There’s some drama, as there is with anything in this world, like people who cosplay the same character or people who take the hobby much more serious than others, other things that don’t necessarily matter but will cause rifts anyway. It’s impossible to avoid but you have to take the bad with the good in order to enjoy yourself :) Which video game are you playing at the moment?

Hearthstone! I can’t stop haha but I do know I’m behind on the times and need to start playing Overwatch, like, yesterday. Lastly what else does 2016 hold for you?

Hopefully some serious R&R! I need a break! hahah (don’t we all)