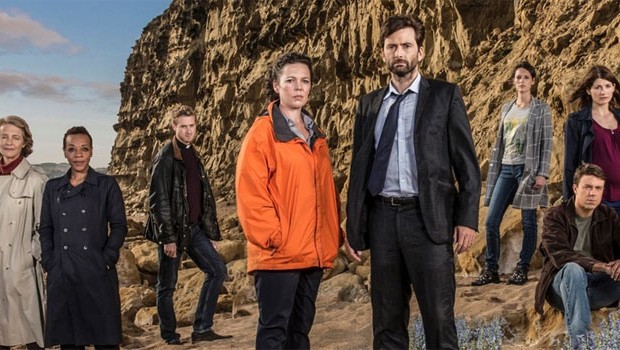 Summary: The second season of Broadchurch is another engaging, magnetic and stirring one

When Joe Miller confessed to killing school boy, Daniel Latimer at the end of Broadchurch Season One many viewers thought it was case closed. End of story. But the popular, award-winning TV show came back with a highly-anticipated follow-up which saw some of the old stylings combined with some new ideas. Overall, it was another exciting and interesting instalment to this crime drama. The series is once again set in the tight-knit, seaside town the series is named after. It’s a small place but it is also one that is harbouring some big secrets. The community had already dealt with being participants in a murder investigation but fresh wounds are exposed on day one of Joe Miller’s (Matthew Gravelle) murder trial when he pleads “Not guilty” despite previously confessing to the crime.

The series is once again written by creator, Chris Chibnall who continues the central storyline of the first series. But in addition to the courtroom drama, he also adds another thread, the Sandbrook case or the one that previously plagued DI Alec Hardy (David Tennant (Doctor Who)) because it had been impossible to solve. This case had involved two young girls who were cousins, one that was found dead and the other missing and presumed dead. It is Hardy who is protecting Claire Ripley (Eve Myles (Torchwood)), the wife of the suspect (James D’Arcy) but she is not being completely forthcoming.

The ensemble cast from season one once again put in excellent performances. Tennant shines as the brash and socially awkward, Hardy while Olivia Colman plays his counterpart, DS Ellie Miller who has to grapple with her husband being a killer, a son who refuses to live with her and many other competing ideals. The Oscar-nominated, Marianne Jean-Baptiste plays Joe Miller’s cunning, Rottweiler-like defence lawyer while the graceful, Charlotte Rampling plays the clever retired prosecutor who is also facing her own health and family issues. Broadchurch is once again a character-driven thriller. Chibnall does an excellent job of threading together many complex tapestries for his characters and the plot (which is not as exciting in this second serving but it is far more complicated). The scenes are beautifully-shot and add to the emotionally-wrought atmosphere, tension and drama. The brooding background is provided by excellent plot devices and Ólafur Arnalds’s dark soundtrack.

The special features on the DVD are a tad disappointing when compared to the series. There are special “making of” featurettes and interviews with the cast (except that the sound bites from the latter are often reused in the former).The advertisements by Tennant and Colman are rather unnecessary but the deleted scenes are compelling and do offer some insights into the show’s direction.

The second season of Broadchurch is another engaging, magnetic and stirring one. It manages to hook you in even when some of the events that transpire seem a tad improbable. Overall, this award-winning show builds on the shock, intrigue, twists and turns of its predecessor and it achieves the rare feat of keeping the viewer on their toes right until the very end.