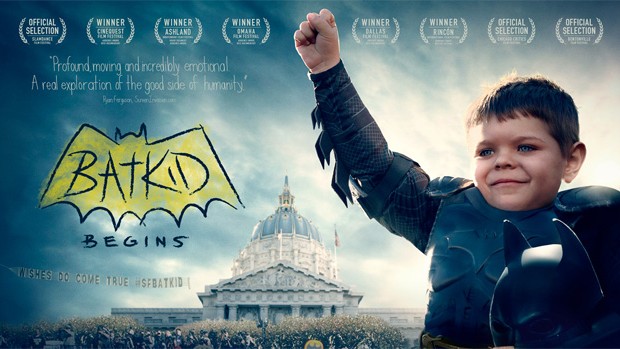 Summary: “Batkid Begins” is a beautiful, powerful and uncomplicated story about how one good deed performed on a single day in a large city for a sweet little boy rocked the world.

Holy smokes Batman… On 15 November 2013 a viral phenomenon took place. It was known as “Batkid” and it’s a story that dominated the press and social media at the time. Now it’s also the subject of a documentary film called, “Batkid Begins”. It is ultimately one hopeful and uplifting tale that is overwhelmingly positive in its depiction of humanity being on its best behaviour, if just for one day. The story is directed and written by Dana Nachman (“The Human Experiment”) and is about Miles Scott, a young boy aged five (almost six) who is in remission after being diagnosed with lymphoblastic leukaemia at 18 months. Scott had endured years of chemotherapy and steroid treatments and the wonderful people from the Make A Wish Foundation decided to grant him his heart’s desire for a day. Scott wanted to be Batman (a superhero he had come to admire as he watched re-runs of the Adam West incarnation while receiving cancer treatment). Enter Patricia Wilson, the executive director of the Greater Bay Area Make A Wish organisation. This woman was determined and perhaps a little foolhardy in agreeing to get the wheels in motion to grant this wish. The idea snowballed from a kid donning a superhero outfit in a park to a full-scale production which involved shutting down San Francisco city (which was redubbed “Gotham City”) and came complete with staged capers and adventures.

This film fuses together animations, sentimental schmaltz (a beatific choir sing a cover of David Bowie’s “Heroes”) and a play-by-play description of the actual event as well as interviews with those who planned and were involved with the monumental day and the aftermath. Among the interviewees is Eric “EJ” Johnston, the man who played Batman and the individual that was integral to this wish actually happening. His duties included teaching Miles some acrobatic stunts, co-ordinating devices to play messages from the police chief and roping in his wife, Sue Graham Johnston and friend, Mike Jutan to play a damsel in distress and The Penguin, respectively. “Batkid Begins” does not really question or justify whether this act (above other wishes) was the most valid and worthwhile. It also doesn’t offer information that’s particularly new. But where it does succeed is in sprinkling some magic pixie dust and fashioning a feel-good story that really shows how people can band together and make a difference, in a big way. This is one beautiful, powerful and uncomplicated story about how one good deed performed on a single day in a large city for a sweet little boy rocked the world. Gorgeous.