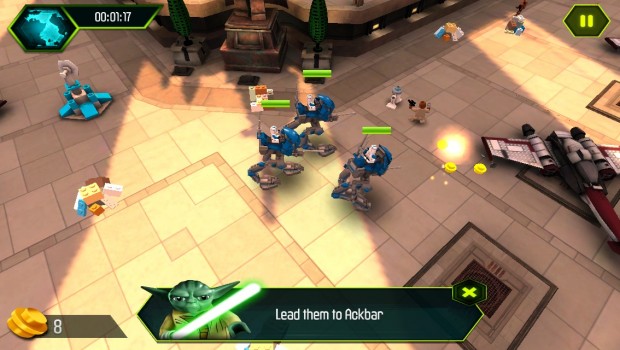 WARNER BROS. INTERACTIVE ENTERTAINMENT, TT GAMES, LUCASARTS AND THE LEGO GROUP USE THE FORCE TO LAUNCHLEGO® STAR WARS™: THE COMPLETE SAGA FOR iOS

The Franchise that Kicked-off the Hugely Successful LEGO Series of Videogames, LEGO Star Wars™ Is Now Available for iPhone, iPad and iPod Touch

Since its debut to console and handhelds in 2007, fans everywhere have enjoyed the award-winning LEGO Star Wars: The Complete Saga and now they can travel to distant galaxies far, far away as they play through their favourite moments from the films on-the-go.

“We are very proud and excited to make our acclaimed LEGO Star Wars: The Complete Saga available to iOS players,” said Tom Stone, Managing Director, TT Games, Publishing.  “With hundreds of character customisation options, a plethora of puzzles to solve, and vast worlds to explore, LEGO Star Wars: The Complete Saga for iOS will have mobile gamers enjoying endless hours of gameplay.”

In LEGO Star Wars: The Complete Saga for iOS, players can experience the epic adventures of all six films and unlock up to 120 characters, including Luke Skywalker, Darth Vader, Yoda, Han Solo, and Obi-Wan Kenobi.  They can either play as their favourite Jedi Knight or Sith Lord, using the Force with their fingertips.  With a tap or swipe of the finger, players can use the Force and fight a Lightsaber duel – either for or against the evil Empire!

Delivering 36 action-packed levels, players will be able to download the LEGO Star Wars app and play Star Wars: Episode 1 The Phantom Menace story mode for free.  All other Episodes and additional content are available for purchase, as well as other exciting in-game content such as special missions, levels, and modes.

Developed by TT Games, LEGO Star Wars: The Complete Saga is now available from the App Store on iPad, iPhone and iPod touch or at http://www.appstore.com/LEGOStarWarsTheCompleteSaga.