Summary: Donut County is a fun, simple game where you control a hole in the ground. Yet the characters and story really make it memorable.

Donut County has been one of the most challenging games that I’ve ever had to review. Not because it was tough to beat or I didn’t enjoy it – quite the opposite actually, I really liked the game. This review challenged me because I’m struggling to find the words to describe Donut County without simply saying “It’s like Katamari, except you’re a hole in the ground”. That should really tell you all you need to know, but I’ll do my best to articulate that thought a little more elegantly. 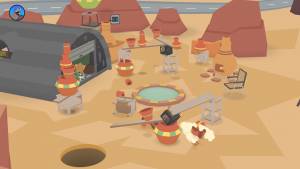 Donut County’s unique premise doesn’t really fit in any normal genre classification, but I suppose if you were forced to assign a genre to it, Donut County could be described as a puzzle game. As the player, you control a hole in the ground and the aim is to manoeuvre the hole around an area littered with objects, causing them to tumble down to the unseen depths below. The size of the hole increases with each object swallowed and the “challenge” is to collect every object in the scene, starting with the tiniest blade of grass and finishing with entire buildings. 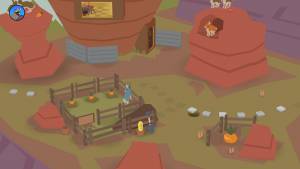 The word ‘challenge’ is used quite loosely in the above description because there’s very little challenge to Donut County. There’s no fail state, no timer, no lives – its just you dragging a hole around, seeing what will fit in and what won’t. But it isn’t a completely mindless endeavour either. The first few levels simply require you to swallow up everything in sight. However later levels introduce a few light puzzle elements that prevents the gameplay from becoming dull and instead keeps things feeling fun and interesting. 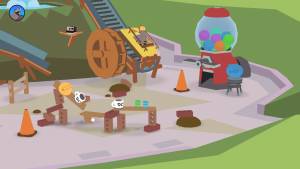 A basic example of these puzzle elements is in one stage where you are required to collect fruit off a tree. After a bit of trial and error, you’ll discover the solution is to begin by swallowing the individual logs of a raging camp fire, then engulfing a block of charcoal, causing a momentary tower of flame to erupt from the hole. With the few seconds of flame spewing forth, you need to quickly drag the hole beneath the trees in order for the fruit to catch on fire and eventually tumble down into the hole. I didn’t encounter any challenges that really tested my mental fortitude, but I quite enjoyed tinkering with the various objects and their interactions in order to complete the levels. 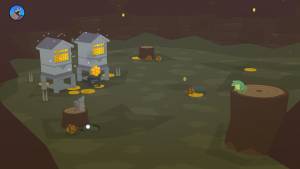 Much to my surprise, there’s actually a rather engaging story behind this bizarre game of hole control. The game takes place during an interrogation between the citizens of Donut County and a charmingly mischievous raccoon who is revealed to be controlling the hole that is destroying the town. Each level plays out the events leading up to a character’s home or business being destroyed, with a well-written and genuinely funny dialogue exchange bookending each stage. There’s even a touching character arc that takes place across the storyline. The game would have been just fine without a narrative, but its inclusion gives the game a strong sense of personality and really makes the two-hours of gameplay far more memorable. 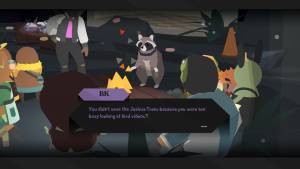 Tying together this unique gameplay concept and bizarre storyline is a fantastic visual design that gives Donut County a fun, silly, Saturday morning cartoon vibe. All the objects in the game are created out of untextured, brightly coloured, low-fidelity polygons. This allows dozens of objects to populate the screen and interact with eachother, which is vital to delivering the sense of mayhem and destruction that Donut County does so well. An awesome, boppy soundtrack also greatly bolsters the fun cartoonish visuals and adds a sense of whimsy to the crumbling chaos of the gameplay. 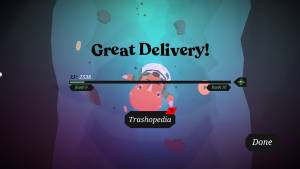 Donut County is a strange, unique game, and I think it’s great. The gameplay is simple yet undeniably enjoyable. The visuals are cool, colourful and fun. Yet most impressive is the rather captivating story and characters that tie this whole thing together. Sure, the game might be a little too easy and really only takes a few hours to beat without much incentive for replayability (unless you’re interested in chasing achievements). But Donut County is easily one of the most enjoyable games I’ve played this year and I think everyone should check it out. 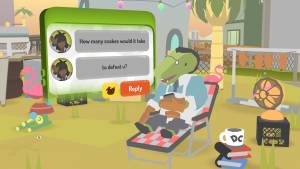 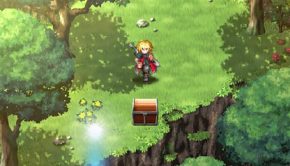