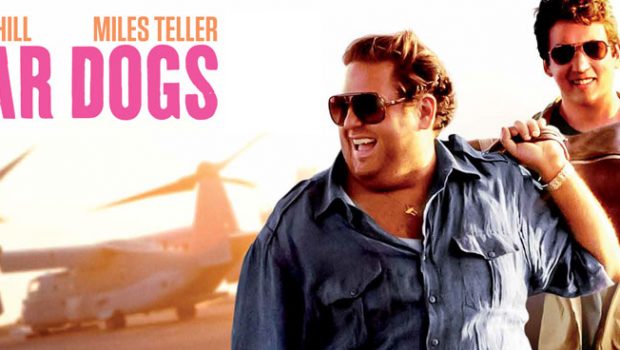 Summary: When the Pentagon offers contracts to arm their allies to the general public... what could possibly go wrong? Based on a true story... we get to see the unfortunate result.

War Dogs to be blunt, is Lord of War for the MTV demographic. Both films are based on true stories… but while Lord of War tells of the rise of someone who built their way up bit by bit and knew their product and the people they were dealing with, War Dogs shows how the American system of democratic commerce in an attempt to make things less “corrupt” ended up arguably making things worse.

Set against the backdrop of George Bush Jr’s presidency (specifically the fall out from Vice President Dick Cheney’s business dealings) War Dogs opens with two former school friend hustlers… one somewhat successful, the other seemingly doomed to failure (or at least to continue giving men massages). Efraim Diveroli informs his friend David Packouz that the Pentagon has opened up contracts to smaller dealers and that a lot of money can be made. After initially being skeptical David jumps in and becomes a minor partner in Efraim’s new business venture. Scoring their first major deal the pair fail upwards and soon have their own office with modest staff to increase their business. Then David spots a deal that seems too good to be true… no longer just bidding for the crumbs, this deal would see them bidding for the whole “Pentagon Pie”. A questionable deal with a shady character later and the pair are arranging to make good on the contract… but then things start to fall apart.

The opening of the movie presented us with David who seemed like a small time hustler… having just purchased hundreds of sheets with the intention of selling them to age care homes he learns that the operators of these homes really don’t care to look after their people that well. This works to serve as a financial anchor to David who then discovers his partner is pregnant, lending further urgency to the notion of finding an income stream and setting up to be more pliable to the will of Efraim. You could easily argue that throughout the film there are these moments of societal commentary (intentional or not)… the notion that people don’t care for each other and won’t spend a dollar unless they have to. The idea that morals are great for people until they are in a tough financial situation. The concept that it’s not about making enough to live off… it’s about whether you made the most you possible could… and then if you can squeeze more out of the deals then you should (or rather you really shouldn’t).

Jonah Hill and Miles Teller do fine jobs in their respective roles of Efraim and David and I was pleased to see Ana de Armas play a more reasonable part than when last I saw her (in Knock Knock). Her acting chops were on fine display in a scene in which David comes home and her demeanour tells you without any need of words that he is in big trouble… the anger bubbling away beneath the surface is tangible as she waits for the inevitable question “what’s wrong?”

Ultimately this story tells of a number of the problems with the way America is set up… the constant value put on making millions above all else and the quest to do just that. The notion that “greed, for lack of a better word… is good.” The ending in this regard may be more morally pleasing than Lord of War but to be honest both films have their own appeal. I was concerned at the start of War Dogs that they were setting me up to watch a questionable character and to sympathise with him despite his apparent lack of real decency. This issue was rectified by placing him alongside someone who clearly had no morals or scruples.

Worth a watch if you want to peer just beyond the “normal” world to see a glimpse of what goes on in the lives of shady people… even shady people who are Government contractees.