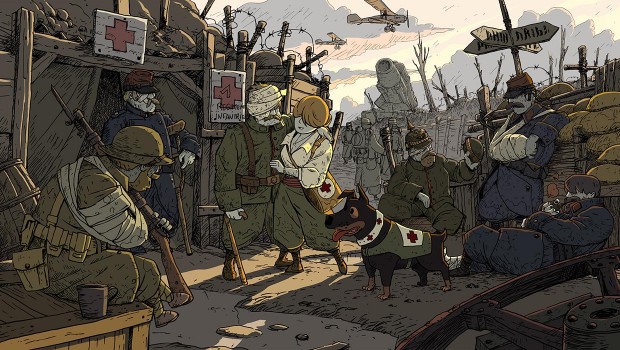 Sydney, Australia — September 5, 2014 — Today Ubisoft announced that Valiant Hearts: The Great War™, the puzzle-adventure game set during World War I, is now available to download only on the App Store. The first chapter is available for $6.49.

The mobile version, which is currently available to download on iPad, iPhone and iPod Touch, introduces intuitive controls that have been optimized to give the player a smooth gameplay experience. The puzzle-based gameplay on mobile platforms offers completely rethought touch controls and an immersive way to interact with history. The iOS version also includes detailed historical content and the ability to seamlessly share interesting facts on social media channels.

Valiant Hearts: The Great War™ is the story of crossed destinies and a broken love in a world torn apart. All of them will try to survive the horror of the trenches following their faithful canine companion. In Valiant Hearts, the lives of all these characters are inextricably drawn together over the course of the game. Friendship, love, sacrifice and tragedy befall each one as they help each other to retain their humanity against the horrors of war.

Valiant Hearts: The Great War™ was developed by a small team at Ubisoft Montpellier, known for their work on critically-acclaimed titles like Beyond Good & Evil®, Rayman Origins® and Rayman® Legends. The team used the UbiArt Framework to easily and efficiently animate the game’s comic-book style, which consists of a wide-ranging color palette – from the dank trenches to green forests and snowy fields – that provides stunning scenic variety and visual contrast. Ubisoft’s UbiArt Framework is a powerful engine that lets programmers and artists bring their art to life by allowing original concept art to be inserted directly into the game world. For the development of the iOS version, Ubisoft Montpellier worked in collaboration with the Ubisoft Casablanca studio.