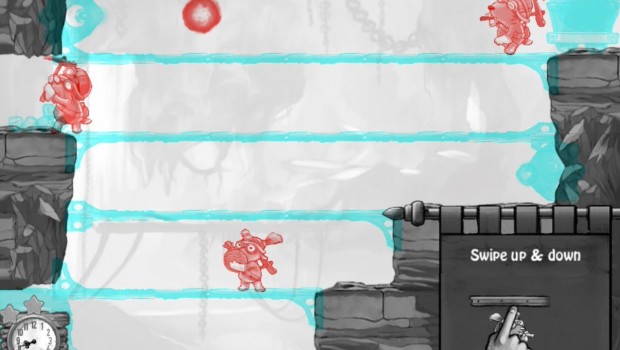 Sydney, Australia – March 4, 2015 – Today, Ubisoft and Amblyotech Inc. announced their collaboration on the development of Dig Rush, the first video game based on a patented method exclusively used for the treatment of Amblyopia, also known as “lazy eye.”

Using inventions initially patented by Drs. Robert Hess, Benjamin Thompson, Behzad Mansouri, Jeremy Cooperstock, Long To and Jeff Blum at McGill University, and subsequently licensed to Amblyotech, Ubisoft is applying gameplay principles to create an entertaining method that can improve patients’ engagement and experience during Amblyopia therapy. This new video game offers the potential of long-lasting treatment for this condition.

“While current treatments options, such as eye patching, provide limited relief and have poor patient compliance due to discomfort and social stigmas, the Amblyotech-patented electronic therapy has been tested clinically to significantly increase the visual acuity of both children and adults who suffer from this condition without the use of an eye patch. With our agreement with Ubisoft, we are further able to provide physicians with a complete and accurate picture of treatment compliance to help them monitor patient progress throughout therapy”, stated Joseph Koziak, CEO of Amblyotech.

“The development of Dig Rush was a great opportunity for us to contribute our knowledge and skills in video game development to help materialize a breakthrough novel medical treatment.” said Mathieu Ferland, Senior Producer, Ubisoft. “The team from Ubisoft Montreal has been able to create a more engaging and enjoyable experience for patients being treated for Amblyopia, and we’re proud to be involved in such a positive illustration of the impact of video game technology.”

Instead of training just the weak eye, the new game uses both eyes, binocularly, to train the brain in order to improve visual acuity of the patient by using different contrasts levels of red and blue that can be seen through stereoscopic glasses. Using this method, the physician can adjust the game’s settings in accordance with the specific patient’s weak eye’s condition, allowing both eyes to see the gameplay unfolding.

“McGill University has a proud history of innovation and product development in numerous fields, especially life sciences.  It is our pleasure to see one of our invented technologies take the next step to commercialization” stated Dr. Michèle Beaulieu, Associate Director of the Invention Development and Entrepreneurship Assistance Team in the Office of Innovation and Partnership of McGill University.

Amblyopia is an ocular disorder that involves decreased vision in one eye as the result of a turned eye or unequal refractive error (meaning that one eye is more powerful than the other). Traditional treatments which include patching of the sighted eye have had minimal effect due to poor compliance and other issues such as social stigma, a longer treatment time and a high relapse rate among adolescents and adults.  This medical condition affects up to 3%1 of children internationally, and if unsuccessfully treated, is a leading cause of blindness in adults.

Amblyotech will be seeking FDA clearance to market this therapy in the US.  Upon receipt of all regulatory approvals the treatment will be available worldwide.