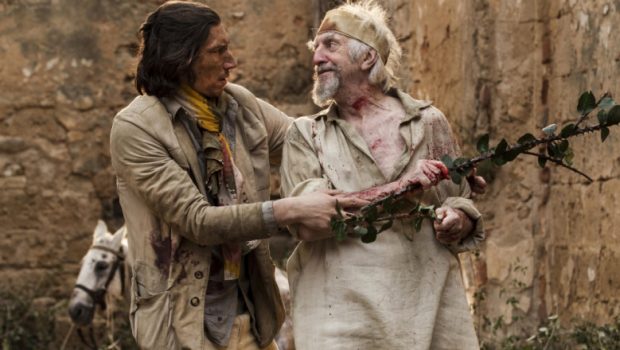 Summary: This is a strange, incoherent mess where the back story of the film is more interesting than the finished product. Give it a burl, but ensure you bring a map.

There is no question that “The Man Who Killed Don Quixote” was a labour of love. Director, Terry Gilliam of Monty Python fame spent over 25 years getting this project off the ground. Instead of spending his time refining and tightening the proceedings, the opposite occurred. This film is bloated and overlong and ultimately one head-scratching affair.

It’s interesting to consider how this comedy may have been realised if the earlier versions had gotten off the ground. Some different actors and collaborators may have brought different sensibilities to the proceedings. But it’s doubtful that they would have made the finished product any more coherent. This story seems to revel in its blurring of reality and the idea of a movie within a movie.

Adam Driver (“Girls”) is a mesmerising actor. He starts as Toby, an arrogant director of commercials. He’s lost his passion for filmmaking. That is, until he begins a project that has Don Quixote-like elements and remembers a film he made during his younger, headier days.

Over the course of two very long hours, Toby joins forces with a shoemaker named Javier (Jonathan Pryce). Javier is convinced he is Don Quixote. It is then a long, slow descent into madness. In being complicit in this act, Toby becomes an unwilling Sancho Panza character. Toby attempts to be the voice of reason in a place that is devoid of any.

There are some obvious parallels between this film and Gilliam’s work behind-the-scenes in getting it made. Sadly, the later story seems to be far more interesting than the one on the screen. His finished product features a lot of surreal meanderings and absurdist slapstick. A lot of the audience are bound to get lost in the maze wrapped up in an enigma and a smoke screen.

“The Man Who Killed Don Quixote” was an ambitious experimental project. Gilliam tries hard to fashion a satire that pokes fun at politics and filmmaking. But the piece is far too erratic and strange to cut through. “The Man Who Killed Don Quixote” proves that sometimes it’s important to let go before a don becomes one you can’t get out of your head.