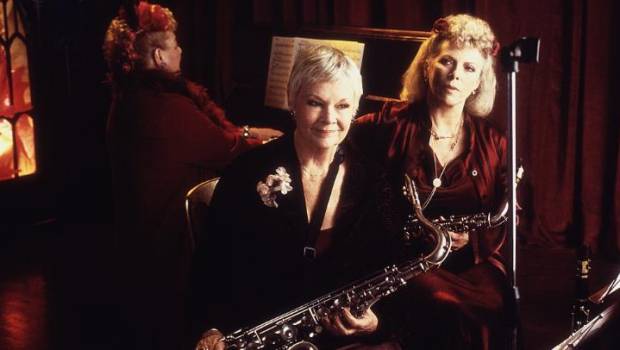 The Last of the Blonde Bombshells DVD Review

Summary: An English comedy that you can sit and watch with your grandparents. It’s nice and just like slipping into a well-worn pair of shoes.

It’s the same old song… although that may be a bit harsh. “The Last of the Blonde Bombshells” certainly traverses familiar territory. The film is a charming little slice of feel-good nostalgia. It’s also one that you can sit and watch with your Nan on a jolly, Sunday afternoon.

This film is from the producers of “Notting Hill” and “Four Weddings & a Funeral,” although it’s not in the same calibre. Gillies MacKinnon directs and Alan Plater offers a screenplay that sees a lady named Elizabeth revisit her teen years. Dame Judi Dench stars as the latter, a woman who was a saxophonist in a predominantly all-girl group called The Blonde Bombshells during WWII.

Dench is her usual captivating self in her portrayal of Elizabeth, a woman who gets nostalgic following the passing of her husband. Driven to explore her musical roots, Elizabeth sets out on getting the old band back together. Along the way we learn that members have had stints in jail and the Salvation Army. The fabulous Olympia Dukakis meanwhile plays a woman who has become a drunken rich lady. It’s a big all-star cast and the different sub-plots and threads are dealt with rather swiftly, often to the detriment of a detailed portrait or characterisation.

One of the blonde bombshells is a drummer named Patrick (Ian Holm) who was avoiding conscription in the army. He and Elizabeth rekindle their old romance. There are some cute asides about Patrick’s trysts with his sexy bandmates, which comes to a satisfying conclusion at the end. The group have a rocky start when they initially reunite and reminisce. But no surprises, their “big gig” goes off with a bang.

“The Last of the Blonde Bombshells” is nice. It’s not going to rock your world but it is a pleasant little romp back through time. The film is brimming with entertaining show tunes, just like those things your grandparents listen to on the old wireless. Sit back and enjoy some toe-tapping fun from their youths.