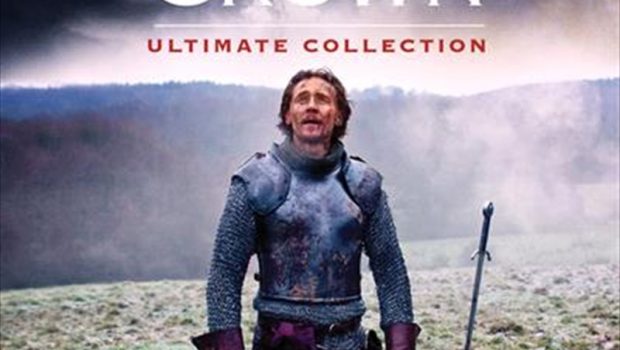 Summary: Stunning adaptations from modern times and forty years ago prove that Shakespeare is as vital and relevant today as he ever was.

For within the hollow crown
That rounds the mortal temples of a king
Keeps Death his court…
— Richard II, act 3, scene 2

Why study Shakespeare? For that matter, why watch Shakespeare? What is it about an English playwright, who lived and died over 500 years ago, that still captures the imagination?

The Hollow Crown – The Ultimate Collection goes some way to answering that. The set, which contains a series of adaptation of Shakespeare’s plays that revolve around kings and characters from before and during the English War of the Roses, is a compelling blend of history as entertainment, drama, tragedy and a demonstration that politics of that era was often a blood sport.

It makes sense that Shakespeare, living most of his life in the era of Elizabeth Tudor, first queen of that name, would write plays concentrating on the eventual winners of that first English Civil War. After all, it is Elizabeth’s grandfather, Henry VII, whose army would defeat Richard III at Bosworth field, an institute a dynasty that would rule England for 120 years. As ever, if you want to prosper, always make the winning side look good.

That’s not to say that in doing that, Shakespeare ignored all the other characters and elements. His Richard III, whether you believe the libel about his physical deformities or not, is one of the compelling characters in English literature. His Winter of Discontent soliloquy is justly famous, not only for the writing, but also as a window onto the soul of a discontented man of ambition who would climb over the bodies of his brothers to the throne of England. Or Henry Vs famous St Crispin’s Day Speech prior to Agincourt, which describes the essence of manly virtue, fraternity and bravery in the face of terrible odds. Shakespeare knew how to capture the language of the day, knew how to distil the essence of character, in all its flaws and brilliance, and present it strutting on the stage against the dying of the light.

Most of us have experienced Shakespeare thanks to our English studies at High School. Some, like me, may have seen in class the 1968 movie adaptation of Romeo and Juliet by Franco Zeffirelli. Others may have seen Ian McKlellan pre-Magneto as another troubled anti-hero, Richard III, in an update setting in a 1930s fascist England. Or if you’re brave, the extra-long adaptation of Hamlet starring our very own Mel Gibson as the prevaricating Dane.

But you won’t have seen anything like the productions in this collection.

For extra points, the producers of this set have included the original BBC Shakespeare adaptations of Richard II, Henry IV, Henry V, Henry VI & Richard III, featuring the crème del a crème of English Shakespearian actors and were regarded by some at the time as being the finest adaptations of those plays. Even now, they retain their power and influence. Derek Jacobi and John Gielgud are some of the great actors of their generation who appear in these plays.

A note here, of course, that the earlier BBC adaptations are archival material. The picture quality is not what you see with the actual episodes that make up The Hollow Crown plays, though the audio is perfectly fine. Blacks aren’t as black as they could be, and there’s a general softness to the image that tells you you are watching a television production from 40 years ago.

On the flips side, the 2012 adaptations of the same stories are often shot on location (you can tell how cold even the internal shots are by the visible breath of the actors) and have a crisp, filmic quality that speaks volumes about today’s technology. This approach also adds a depth and historical weight that can often go missing when the actors appear on sets. That said, even the stage bound Richard III from 1982 uses the stage to wonderful effect, creating a claustrophobic world as Richard murders his way to the throne. Like the BBC adaptations, these newer efforts are jam-packed with actors as brilliant as Judi Dench, Michael Gambon, Julie Walters, Patrick Stewart and Ben Whishaw appearing.

The pick of the acting goes to Benedict Cumberbatch’s bravura performance as Richard III, hunchback and all. At times venomous, and at times seemingly sincere, Cumberbatch provides a performance for the ages, a Richard who lusts not only for power, but for love as well. This contrasts with Ron Cook’s Richard from the earlier BBC adaptation, which is a much softer performance, almost sly, but matches Cumberbatch’s approach of directly addressing the camera, and thus the audience, making them accomplices to his evil acts.

So why read and watch Shakespeare? Why this 500 year dead writer? Because unlike almost all his contemporaries, Shakespeare’s writing still lives and breathes, even after the passage of centuries. Even now, his Richards, his Henrys and his Falstaffs all live and breathe. They, with all their faults, their passions, their hates and their loves, are mere humans like the rest of us. What we see in them, is what we see in us, a common thread of humanity that remains unbroken even after all this time.