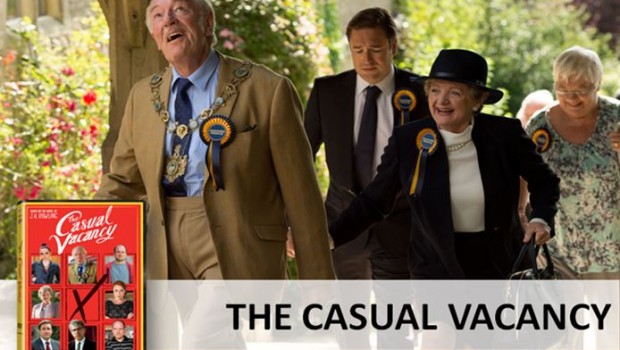 J.K. Rowling, HBO and the BBC combine to produce The Casual Vacancy, a dark and dramatic, three-part mini-series starring Sir Michael Gambon, Julia McKenzie, Keeley Hawes and Rory Kinnear and based on the novel by J.K. Rowling. The Casual Vacancy is available on DVD (SRP $29.95) from July 8th.

Pagford is a quaint, picturesque town in the Cotswolds, a seemingly idyllic English village with a cobbled market square and ancient abbey. Behind the pretty façade, however, is a town at war: rich vs. poor; parents vs. children; wives vs. husbands; and teachers vs. pupils.

As Pagford Parish Council prepares for a vote on what will become of Sweetlove House – a town institution and community centre serving poorer residents – chairman Howard Mollison (Michael Gambon) and his wife, Shirley (Julie McKenzie), who want to turn it into a tourist-destination spa, look to neutralize the threat of everyman council member Barry (Rory Kinnear), a solicitor and defender of the current Sweetlove House mission. When Barry’s sudden death leaves a “casual vacancy” on the council, the race to fill his seat, and determine the fate of Sweetlove, stirs up drama among residents.