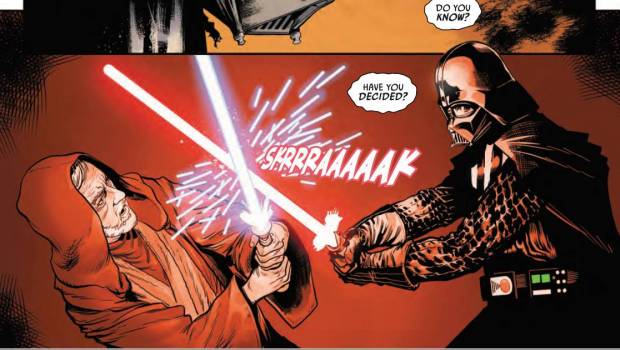 Summary: Some deep Sith lore in this one for the fans but if you are interested in following Darth Vader's storyline to the end this is well worth a read.

After being severely punished by Emperor Palpatine and left to sort himself out on Mustafar with the Sith assassin Ochi to make sure he doesn’t use his powers, Darth Vader finds himself in the lair of the Eye of the Webbish Bog. Will he find what he seeks and does he even know what questions to ask?

This is another story that will go down well with fans of the lore behind the Star Wars story as the Eye of the Webbish Bog was originally meant to be featured in Rise of the Skywalker but did not make the cut.

Sly Moore also makes an appearance in this story for the first time since the Revenge of the Sith as she is the most trusted advisor of Palpatine and is the overseer of the Inquistors who hunted the surviving Jedis all over the galaxy.

There is less action in this one, but more of the creatures under Mustafar and the Eye of the Webbish Bog itself does not disappoint. As with the infamous cave on Degobah, the caves under the planet are strong with the dark side of the force which has not really been explored much in the main movies apart from a couple of times.

I was wrong to think that this storyline should have ended at least two issues ago and am excited to see how this one is going to work out.

I would recommend this one to fans of Darth Vader and if you want an interesting Star Wars story with one of the main characters.