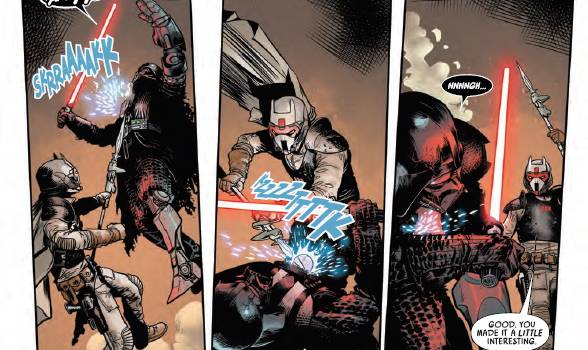 Summary: If you are already reading this series then go straight ahead, everyone else maybe get some context or wait until the collection comes out.

Previously Darth Vader has been stranded on Mustafar and forbidden to use his force powers by Palpatine as punishment with enforcement by a Sith assassin. Dragging himself into the ruins of the former station he gets to work repairing himself and fighting off the assassin, but something more mysterious calls to him and wants an audience that he cannot refuse.

Although this story is a bit more narrow in scope it does have some cool things in it like Darth Vader making his own replacement arm and legs out of discarded robot parts. The fact that he was the cause of the broken robot parts is not lost on him as he remembers killing the beings whose bodies are still on the floor when he goes back there.

There has been some criticism of this and the other Star Wars comics that it is reverse continuity to make the events of the prequels fit in the original trilogy. I did not think that to be the case and if you think about it the prequels actually had a plan behind them and not just changing details at random. The whole Legends/Disney split of the stories throwing out a whole of old details and characters has shaken things up but a lot of them were getting hard to follow. Palaptine was meant to come back in the pre-Disney takeover sequel trilogy but the story was much more confusing.

I would recommend this one if you want to go more into Darth Vader’s motivations of his character and see some more of the planet of Mustafar before it had a castle built on it.