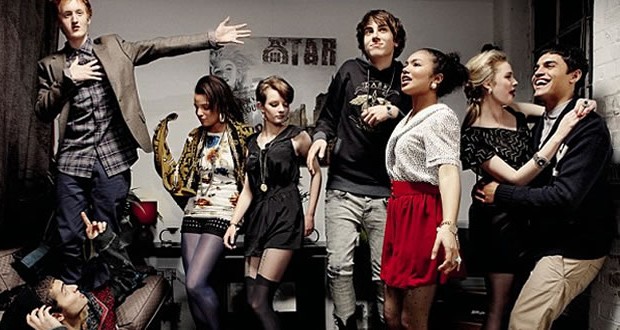 Summary: Skins – The Complete Sixth Series is a return to form and certainly outshines the previous series, even if some of the humour has been replaced by incursions into more emotional territory. Recommended, particularly for fans who may have switched off during the occasionally uneven fifth series.

I came to Skins relatively late into its run, only jumping on board over the last month and voraciously devouring the DVD’s in an effort to play catch up. One thing struck me about the show was how well written it was, never refusing to go down some relatively risqué paths in its explorations of the twists and turns people navigate during their adolescence; another unique aspect of the series was the fact that it only followed the exploits of its cast over a two year period, starting anew with a different generation of teens often facing similar issues faced by their predecessors.

So here we are with the second series of the third generation of Skins characters, also apparently the penultimate series as a whole. A common complaint amongst fans is a perceived dip in quality with each evenly numbered series, with the general consensus being that the storylines or characters can become contrived. After the – Somewhat unfairly, in my opinion – Critically lambasted series four, Skins fell back into the good graces of many of its fans with a cracking fifth series, although some, like myself, found it a bit hard to warm up to the new group at first; will history repeat itself with an inferior follow up series, or does Skins – The Complete Sixth Series manage to break the curse?

Series six opens up with the gang of Franky, Grace, Matty, Nick, Alo, Liv, Mini and Rich holidaying in Morocco, revelling in a hedonistic haze of drugs and sex in a sun drenched locale that couldn’t be further than the series homebase of Bristol. After crashing a party ran by a dodgy drug dealer who seems to have eyes for Franky, jealousies erupt and circumstances build up to a tragic accident that sends shockwaves through the group and threatens to shatter their close knit friendship.

With the repercussions of the ill fated sojourn still reverberating through their lives, the group is joined by a new cast member, the promiscuous, cheeky Alex, whose main character quirk isn’t that he’s openly gay but that he leaves every aspect of his life up to random chance, rolling a dice and consulting a list of pre-ordained choices to inform his movements. Throughout the series Alo and Mini have to face the consequences of their brief dalliance in Morocco, Nick finds himself enamoured by Franky even as her relationship with his brother Matty is hitting the rocks and there’s even a hint of the Supernatural as a familiar face seemingly appears inspectral form.

In my opinion, despite some naff moments and some relationships occurring to apparently further further the plot rather than happening naturally as a progression of a friendship throughout the two series as has been handled so adeptly in previous generations, Skins – The Complete Sixth Series ranks up there with the best of the previous iterations, namely series 1 and 3. Things are noticeably darker this time around and although the show is still interspersed with levity it almost all comes off as bittersweet.

There are many major changes in character dynamics this time around, as is expected as the series heralds the end of this generation’s story; Franky in particular seems like a completely different character as she comes into a sexual awakening that creates a distinct dichotomy from the awkward, androgynous girl struggling to find her place in the previous series. Between her toying with Nick and Matty and going along for the ride with the morally reprehensible drug dealer Luke, plus the overall shift in her attitude as a whole, I really found it hard tolerate the character. Thankfully the always dependable Alo has some classic moments that serve to remind me that the show wasn’t always doom and gloom.

Newcomer Alex doesn’t really add all that much to the core dynamic of the group and can come off as a bit of a “Token” character, but he does fill the void left by the departure of another character and his idiosyncratic “Dice game” is an interesting facet of the character that, whilst not really capitalised upon, does lead to some pretty amusing moments. The arc of this season can drag in parts but it all leads up to a satisfying close to the series that, for my money, ranks up there with the very best.

Madman’s disc transfer is also impeccable, with no issues present in either the picture or audio departments.

Each episode has a short behind the scenes featurette dedicated to it, each one running around the 3 – 4 minute mark. Not particularly enlightening, they mainly consist of some cast interviews and a brief rundown of the content of the episodes.

Taking its place as one of the stronger series of Skins, series 6 hits most of the right notes and wraps up the story of the third generation in a typically pathos laden way. One issue I have, which may stem from having watched every series in quick succession, is that the writers often resort to the same tropes and themes that have been explored – And sometimes in a more effective manner – In previous generations. That being said, Skins – The Complete Sixth Series is a return to form and certainly outshines the previous series, even if some of the humour has been replaced by incursions into more emotional territory. Recommended, particularly for fans who may have switched off during the occasionally uneven fifth series.