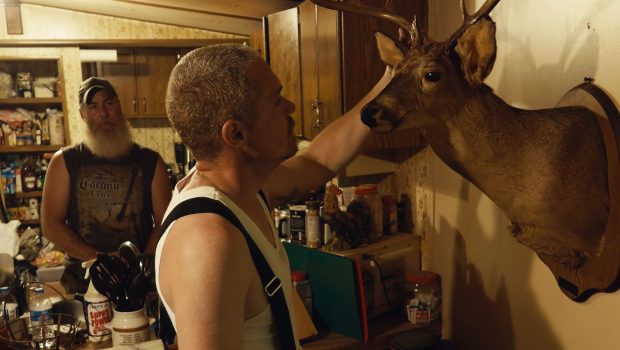 Summary: A bit different than most documentaries in that there is no real commentary it is more quiet and takes its own sweet time to tell its story.

Brian Ritchie tells his story of being the last hillbilly of the title in his own words in the hills of Kentucky in this quiet and sparse film. I agree that having a normal voice over would be overbearing with this movie and as such there are long stretches that nothing much seems to be happening on screen.

Brian’s words seem to be given space to have an impact and there are repeating themes such as grief and loss. He challenges the notion of the hillbilly and that is based on a stereotype from the 1930s of a people discarded after they had finished their usefulness.

The part at the start with the discordant music and strange put-on voice should not put you off as it is merely setting the tone of the film. I do not know why they went with this as some people may think the entire film might be like this and turn it off. You laugh, but I do remember the next door neighbour making us return the Gods Must Be Crazy to the video store as they thought it was a “dumb documentary”. They only learned their mistake when we saw the trailer on the other video we rented.

As with a lot of people who hide their true worth Brian Ritchie does play at being the hillbilly but he is a lot smarter than his outward appearance would suggest. He does talk about some people from the area going away to be educated and better themselves but they still feel the need to return to where they grew up as they need it.

This would make a great double bill with I’m Wanita and I did watch it straight after that movie. I would also recommend it to people who live in or have an interest in rural areas as it is a rare example of a documentary covering a depressed rural area that does not feel the need to talk down to its subjects or bury the message in social commentary.