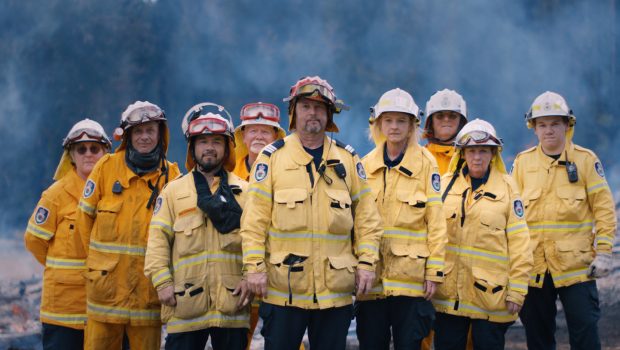 Summary: An important, but difficult to watch documentary that goes into the fact that the disaster does not end after emergency services stop dealing with the immediate disaster it can take years to recover.

Following the one fire crew in Balmoral in southern tablelands of NSW during the Summer 2019/20 bushfire season and aftermath we see the effects of the fire and the aftermath over the course of a year. NSW Rural Fire Service volunteer Nathan Barnden saved a family of seven, but lost his uncle and cousin. The captain of the Balmoral RFS Brendan O’Connor saved his community even when he was ordered to leave by his command, but is having trouble dealing with the aftermath. It didn’t just “end” after the rain came.

This is a hard one as I had thought any documentary on the 2019/20 would be at least five years away. The pain is still close to the surface for a lot of people. They did get a big outpouring of support in the aftermath and a lot of money raised for recovery, but the impacts of COVID19 has left them dealing with things on their own again.

It feels different seeing a documentary about something that was not that long ago and was 24hr hours a day rolling coverage. I know I did have ABC local radio on when the situation in far east Victoria was at its worst. One radio station I listen to stopped even running news bulletins in the usual breakfast spot and said “go listen to radio national”.

Even though the fires were many hundreds of kilometres away from where I live they still had an impact on the city and could not be ignored. I can remember the fundraising events for this and even I raised money from selling artwork to help rebuild at wildlife shelter in East Gippsland that had burnt down. It might not have been much compared to the bigger fundraisers, but was a lot for me as I wasn’t working at the time.

With the bushfire footage I cannot recommend watching this to people who were actually directly impacted as you do not really need to see something you lived again. The frequency of these bad seasons seems to be getting closer together as I barely remember the Ash Wednesday fires in 1983 except my school teacher was away running the CFA radio for a long time. 2009 seems just like yesterday and 2019/20 is way too close.

The amount of ash that dropped in the Southern Pacific Ocean and the smoke that has gone around the world has temporarily changed the climate leading the to wet couple of years we have had since then.

Something that this documentary does show more than other films is that the disaster does not just end when the emergency services stop directly deal with it, the actual recovery takes years and leaves more than just physical scars on the landscape. The emotional impact of the fires are never going to go away for a lot of people they are just going to have to be dealt with and managed over many years.

Hopefully this documentary does help with discussion of the impacts of these disasters and the need to deal with the effects on people as well as the landscape after they happen.