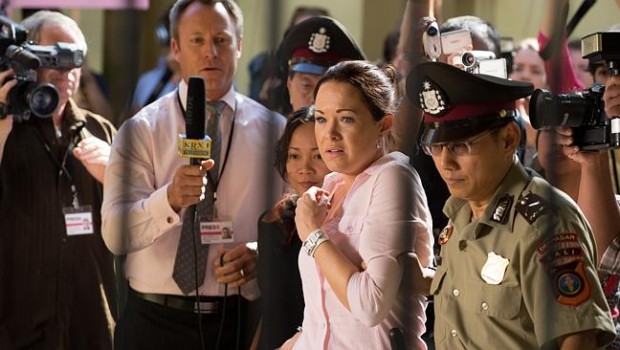 SCHAPELLE: THE TELEMOVIE AVAILABLE ON DVD AND DTO FROM FEBRUARY 24TH

The highly anticipated telemovie event of the year, SCHAPELLE, based on the arrest, trial and conviction of Schapelle Corby (Krew Boylan), will be available to own on DVD and digital download. Due to overwhelming public demand the telemovie will be released on Home Entertainment formats just 15 days after the Channel Nine premiere on Sunday night.

On October 8, 2004, Schapelle Corby was arrested at Bali airport with a massive 4.2kg of marijuana in a boogie board bag.

At first her arrest was barely noticed by the Australian media, but once photographs were published it sparked a frenzy and attracted a cast of colourful characters who came to her aid. They include her sister Mercedes (Jacinta Stapleton), mother Ros (Denise Roberts), father Mick (Colin Friels), and her “white knights”: mobile phone mogul “Mad Ron” Bakir (Les Chantery) and Gold Coast lawyer Robin Tampoe (Vince Colosimo).

On May 27, 2005, Corby avoided the death penalty but was sentenced to 20 years in Bali’s notorious Kerobokan Prison. To this day she proclaims her innocence. From her prison cell in Bali, Schapelle Corby became Australia’s first multi-media celebrity of the internet era. Her case became front page news that captivated a nation and continues to polarise opinion.

SCHAPELLE has been produced by FremantleMedia for the Nine Network. Home Entertainment in Australia & NZ is distributed by Shock Entertainment.