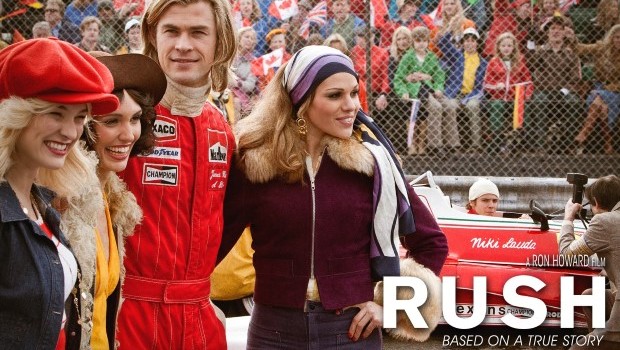 Summary: A fascinating look back at a period where men put everything on the line for a shot of glory and either emerged as kings of the sport or failed in the worst way imaginable.

Focusing on the 1976 Formula 1 rivalry that served to fuel the competition between two racers diametrically opposed in their approach to the life endangering sport, Rush presents a story that is seemingly tailor-made for celluloid, with all the triumph and tragedy of a scripted epic. 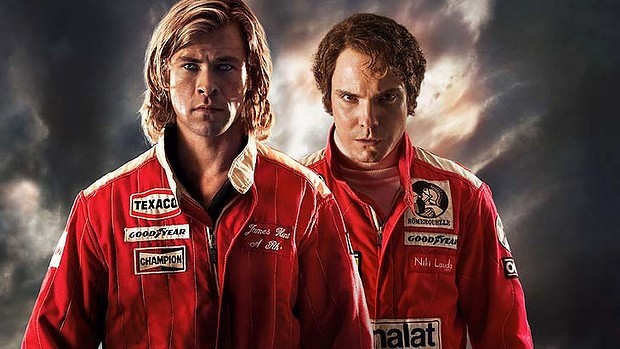 Rush follows the intersecting stories of British F1 driver James Hunt (Chris Hemsworth) and Austrian racer Niki Lauda (Daniel Brühl) as they rise through the ranks from the lower class F3 to the big leagues, each bitterly trying to outperform the other as they eye off the world championship trophy.

Although both exceptionally talented drivers, personality wise they couldn’t be any more different: Hunt is a showy playboy who isn’t above a bit of recreational substance use and anonymous sex, a driver who relies upon his instincts and reflexes to get him through the races, thriving on the adrenaline rush; Lauder, on the other hand, is a methodical and calculating driver who initially buys his way into the industry, painstakingly improving  his vehicle for optimal performance and perfecting his technique whilst assessing each the risks of each race compared to the rewards. 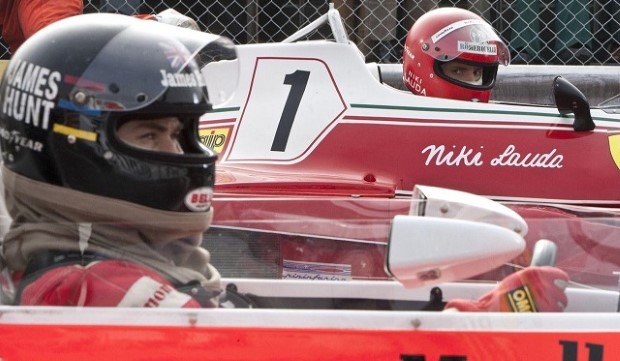 Formula 1 racing during the mid-Seventies is fraught with danger, with few regulations and safety barriers installed to compensate for the increasing speed of the vehicles, so each driver stared down death every time they slipped behind the wheel and tackled the anachronistic courses; in this environment, one small miscalculation can, and very often does, result in death.

As the cars need to be as light as possible, weight reduction demands that the fuel tanks are placed directly beneath the drivers, turning each accident into a potential fiery explosion. Safety wasn’t really paramount amongst the sport’s concerns, nor those of the drivers, who knew full well the risks they were taking with each race. 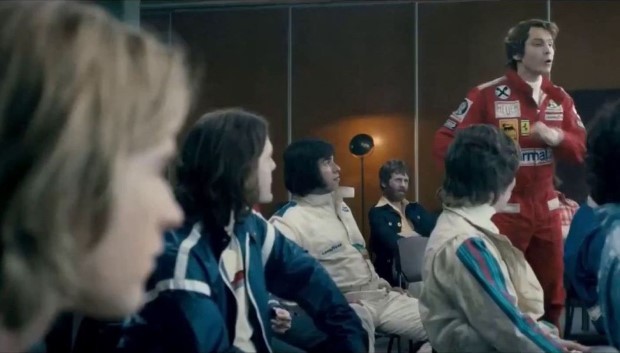 The weight of the film rests upon the shoulders of its two leads and the dynamic between their characters – Although constantly at odds with one another, there is a begrudging professional respect between the two that grows more and more evident as the 1976 season moves along.

Rush also explores the effects their high profile careers have on their personal lives, with particular emphasis on the aftermath of a horrific accident that occurs to one of the protagonists. Dicing with death on a daily basis serves to be both emotionally and physically draining on the pair and, as the season nears its end the question isn’t one of who will take home the trophy but who will survive to the final race. 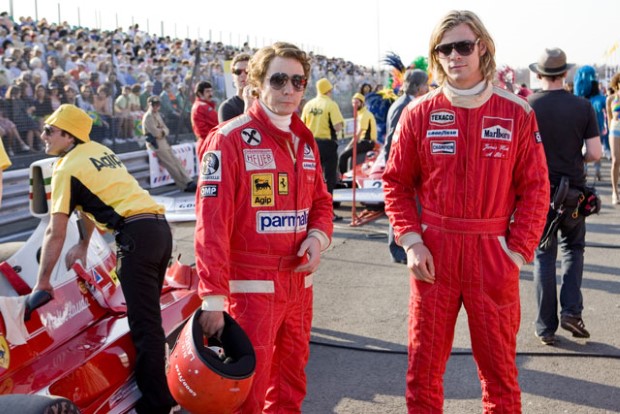 The performances of all involved are exemplary, particularly Brühl’s astonishing transformation into Niki Lauda where he nails everything from the man’s mannerisms to his vocal inflections, and the script by Peter Morgan moves ahead at an unhurried pace, tightly scripted and compelling throughout. Special mention must go to the impeccable production design, with everything from the authentic costuming to the sets evoking the experience of peering through a window into the past.

Rush marks a bit of a departure in terms of the directing style of Ron Howard, straying from convention when compared to some of his other works and the safe and sentimentality evoking tactics that have become hallmarks of his career; here, however, Howard goes for broke, giving the film a visceral intensity via his use of hyperkinetic camerawork, quick cut edits and the absolutely awe inspiring racing scenes, marking Rush as easily the most exhilarating work in his oeuvre. 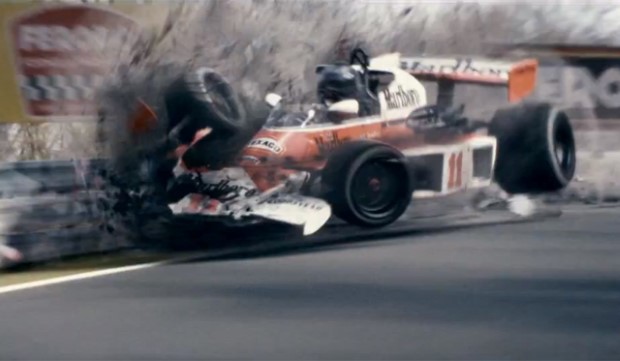 Perhaps Rush’s biggest success is its lack of reliance on prior knowledge of the sport of Formula 1 racing and, indeed, whether or not the viewer even enjoys racing at all, proving accessible for all viewers due to the compelling personal drama that unfolds on the screen and the tangible sense of danger that comes from the expertly shot racing sequences.

That’s not to say that the film is without its flaws of course; the narrative could be criticised as being too conventional, the constant reiteration that the events depicted are factual can become grating and the race scenes can be viewed as redundant despite Howard’s visual flair throughout these sequences.Yet the film rises above these shortcomings due to the strong performances of the leads and the constantly shifting allegiances of the audience towards which character they hope to find triumphant by the final race.

The DVD transfer is competent but nothing special, with a few darker scenes suffering from crushing; the audio is likewise up to standard, with the roaring engines positively dominating the speakers during the racing scenes and the stirring score presented robustly with a Dolby digital 5.1 soundtrack that ticks all of the right boxes. 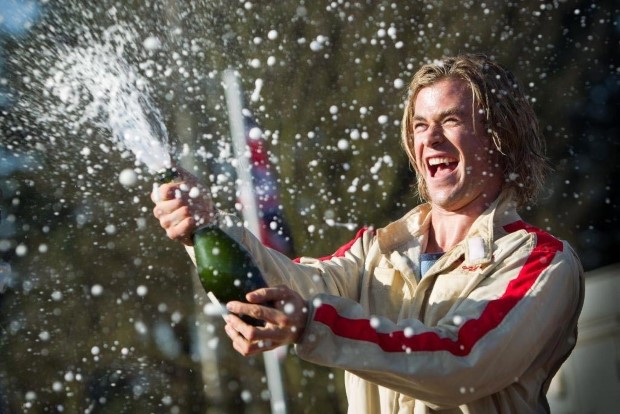 Rush comes with an hour or so of supplemental features, including a making of consisting of interviews with Ron Howard, Peter Morgan and the cast where they discuss the inception of the film and the process of crafting the iconic story for the big screen in as authentic a fashion as ever, covering production design, the process of perfecting the recognisable accents of the two leads and Howard’s prior lack of knowledge of the world of Formula 1 and the media circus that the sport became during its heyday.

There’s also a selection of deleted scenes that don’t really stand out as anything that would have bolstered the movie had they been included but are an interesting aside nonetheless, some trailers and a three part featurette detailing the real story of Rush, where archival footage interspersed with interviews serve to shed light on the dangerous and alluring nature of the sport, making the special features an ideal place for fans to learn more about the film and the sport’s history. The only annoying thing is that both featurettes are broken into snippets, giving them a kind of disjointed nature, but this is alleviated by the presence of a play all option. 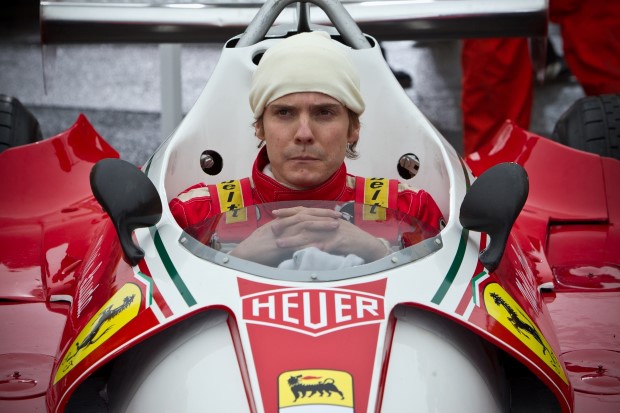 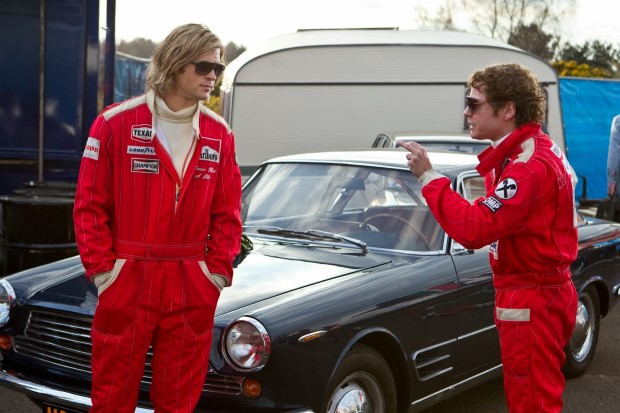 Rush is a largely entertaining film that will be enjoyable for both fans of the sport and newcomers, as a majority of the focus is on the larger than life personalities of the competing protagonists.  Certain elements of the film fail to gel and the direction, whilst outside of Howard’s usual style, is still slightly staid; some viewers may also become frustrated with the constant narrative handholding, but overall the film is stronger than the sum of its parts and proves to be a fascinating look back at a period where men put everything on the line for a shot of glory and either emerged as kings of the sport or failed in the worst way imaginable. 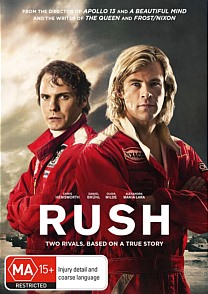