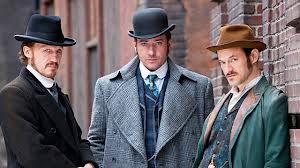 Summary: Fans of British crime thrillers will feel right at home with Ripper Street, a dark and intriguing miniseries that’s a little rough around the edges.

The mystery of infamous serial killer Jack “The Ripper” has and always will be an intriguing part of Britain’s history, which is shown by the countless productions created surrounding the conspiracy. Ripper Street is the latest reiteration of the legend, and while it suffers from inconsistent production and acting quality, the different angle it takes with the story is undeniably intriguing.

It’s April 1889 and Jack “The Ripper” hasn’t been heard of in six months. The Whitechapel H Division police force has been handed the responsibility of finding and arresting “The Ripper” but have failed to find him, so when reports of more women being murdered in the streets of Whitechapel begin to surface, Inspector Edmund Reid (Matthew McFayden, Spooks) and Sergeant Bennet Drake (Jerome Flynn, Game of Thrones) are under increasing pressure to put the killer behind bars.

The eight episode miniseries focuses on one murder case each episode, which is a fairly standard formula for a show with this premise. What Ripper Street does differently compared to the majority of crimes shows that have come before it is that it frequently dives into the personal lives of both Reid and Drake as they attempt to solve these crimes, although it’s difficult to explain these plot elements without spoiling key moments in the series. Nonetheless, there’s a reasonable amount of unpredictability in the story.

It’s hard to ignore that Ripper Street’s art style is inspired heavily by Guy Pearce’s Sherlock Holmes films; gritty grey filters and unsettling camera angles are handled well but are used relatively unfrequently so when they are present Ripper Street feels a little uneven. There are strong acting performances by McFayden, Flynn and a handful of others, but the minor cast can be sometimes poor and rips the emotion from a scene very quickly.

Fans of British crime thrillers will feel right at home with Ripper Street, a dark and intriguing miniseries that’s a little rough around the edges.