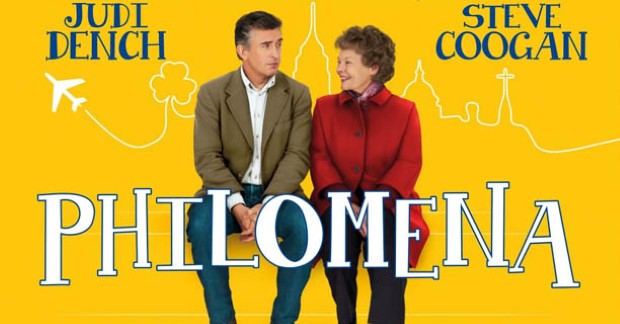 Summary: A beautifully crafted film laden with a deft combination of humour and pathos, Philomena portrays a journey of redemption and closure embarked upon by two different protagonists for very different reasons.

Nominated for multiple awards, including four Oscars and four BAFTAs, Philomena brings to life the true story of Philomena Lee and her cross-continental search for the son sold out from under her during her time working in a convent.

Adapted from the novel The Lost Child of Philomena Lee by journalist Martin Sixsmith, the film’s screenplay Steve Coogan and Jeff Pope is at times alternately harrowing, heartbreaking and hilarious, casting a light on a story of separation that’s almost unfathomable by today’s standards. 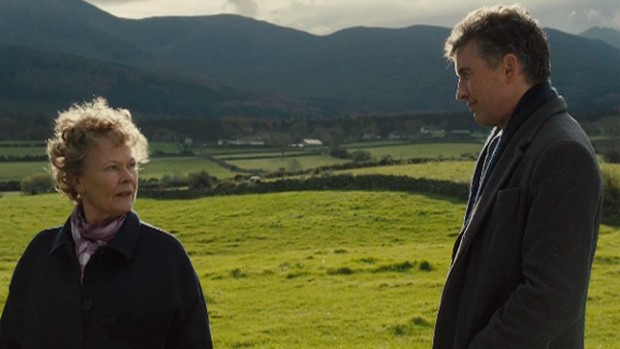 Becoming pregnant out of wedlock, Philomena Lee (Sophie Kennedy Clark during the flashbacks; Judi Dench throughout the body of the film) is a young and confused girl who, with nowhere else to turn and mindful of the stigma attached to her situation, appeals to an Irish convent to assist her with the birth of her son Anthony. However the convent has an ulterior motive for their perceived act of altruism, effectively enslaving Philomena and other young, single mothers to work in their laundry for either four years or until they can come up with a hundred Pounds to repay the Nuns for their assistance.

The convent restricts contact between the mothers and their children to one hour a day and also make a profit on the side by adopting out children to predominately American families for a tidy sum, often without informing the mothers or gaining their explicit consent (Aside from a form filled out upon the mother’s initial arrival).

Philomena’s son Anthony is adopted out with another young girl named Mary and that is the last time she has any contact with him, keeping the burden of his existence and forced removal a secret for the better part of Fifty years before eventually confessing all to her daughter. 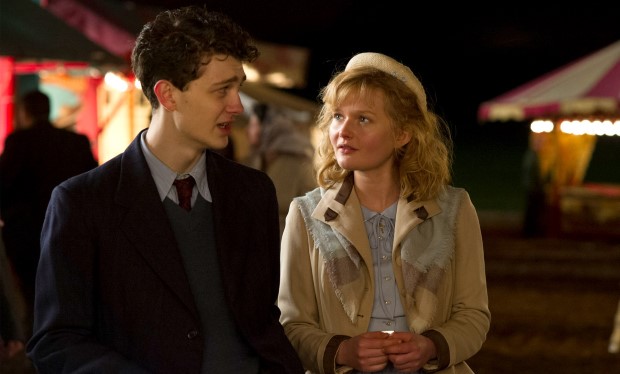 Through a chance encounter with Phliomena’s daughter, disgraced former BBC foreign correspondent Martin Sixsmith (Steve Coogan) catches wind of her tale of woe and sees the opportunity to spin it into a human interest story, embarking on a journey that’ll finally bring closure not only for the optimistic and endearingly naive Philomena but also in regards to certain aspects of the self pitying Sixsmith’s life.

Although seemingly at peace with her position in life, Philomena’s desire for reconciliation with the son she never knew mirrors Sixsmith’s career aspirations, indicating an immense melancholy that lies behind the exteriors of the two characters. Sixsmith is at first bemused by Philomena’s acceptance of the despicable actions of the church, then frustrated before eventually becoming outright enraged yet Philomena constantly turns the other cheek, with only a brief indication of any kind of crisis of faith, showcasing the dichotomy between the fibre of their two characters.

Far from solely portraying a strict adherence to faith as a negative trait as displayed by the actions of the convent, Philomena also explores the other side of the coin where Philomena’s faith and belief in the power of forgiveness is what gives her the strength to carry on in the face of such adversity. 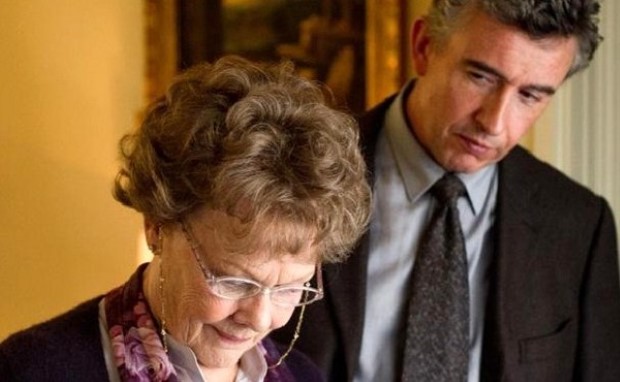 The biggest surprise in Philomena is the structure of the film, with the central mystery dispensed with less than an hour in; however the answers sought by the characters only serve to raise more questions and allows the film to explore subjects such as strictly enforced religious ideals and the effect a lifetime of indoctrination has on a person. Philomena isn’t so much a “Search for the missing person” film than it is a “Search for individual identity” film.

Steve Coogan’s acumen as a dramatic actor is in full effect here, displaying a depth that one wouldn’t necessarily consider possible when comparing this role to that of his Alan Partridge character; both he and Dench grace the film with brilliant performances that result in fully formed characters with complex yet tangible emotional cores and delicious platonic chemistry. Dench would go on to receive a Best Actress Nomination at the Oscars for her role but for me it is Coogan who turns in the truly revelatory performance. 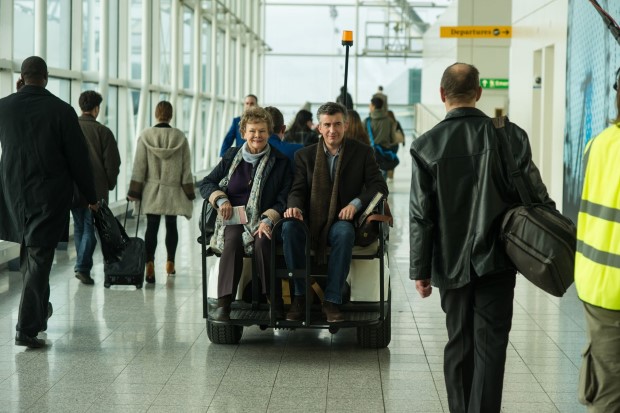 The film moves along at a brisk pace and surprisingly has quite a few moments of levity in stark contrast to the subject matter, a testament to screenwriting prowess of Pope and Coogan; yet at its core Philomena is a heartbreaking exploration of a tragic moment that shaped the life of a woman denied the simple gift of her son’s affections and her journey towards reconciling her own misplaced feelings of guilt, a story made all the more poignant by its basis in fact.

Hopcotch’s transfer is as crisp and clear as you could expect for a DVD release, with a well defined and consistent image and proficient mastering in the sound department. 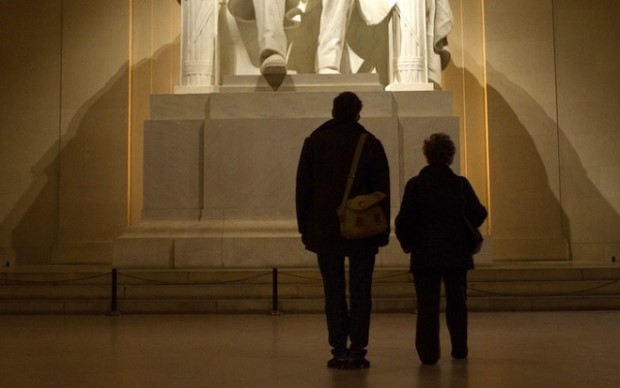 Philomena comes with a fairly lengthy look behind the scenes featuring interviews with not only the primary cast and crew but also the real Philomena Lee and Martin Sixsmith, which offers an interesting perspective on proceedings. Although relatively brief the featurette delves into quite a few aspects of the film’s production process and serves as a nice companion piece to the film.

Also included is a fairly solid commentary track with Coogan and Pope where the duo discuss story elements, scene specific anecdotes and the reshuffling of the film’s narrative amongst other things. Never dull and often amusing, the pair offer up many interesting tidbits for viewers looking to gain more insight into the film’s production, although Pope seems hilariously bad at remembering names.

A beautifully crafted film laden with a deft combination of humour and pathos, Philomena portrays a journey of redemption and closure embarked upon by two different protagonists for very different reasons.

Both leads turn in a superb performance, particularly Coogan, clearly relishing the chance to display his dramatic abilities in a surprisingly poignant turn that lends suitable gravitas to the subject matter.

Director Stephen Frears (The Queen) has crafted a subtly beautiful film that’s bolstered by the strength of Coogan and Pope’s screenplay, resulting in a compelling and emotionally moving experience that’s well deserving of its multiple nominations at awards festivals. 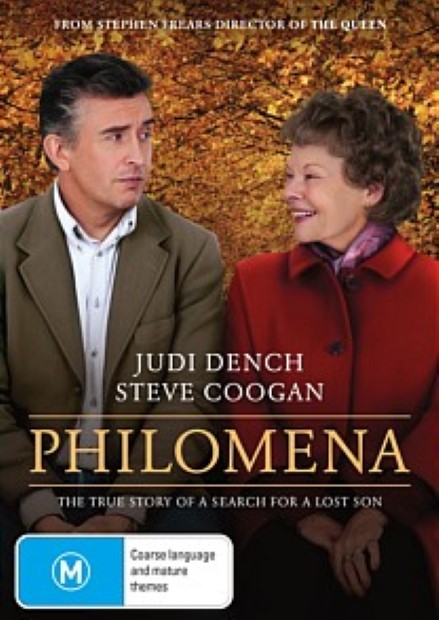