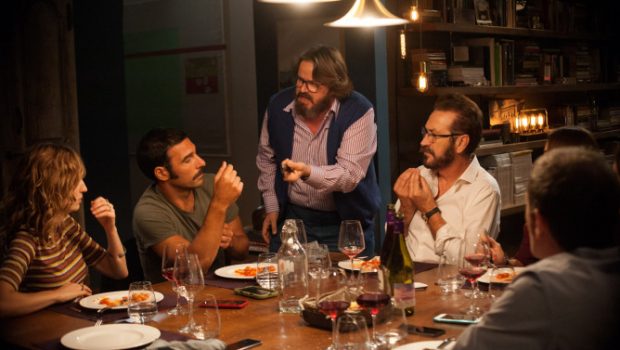 Summary: Perfect Strangers is a clever concept about how technology has affected our lives. This light comedy will make you laugh and think.

In the Italian film, “Perfect Strangers (Perfetti sconosciuti)” the question, “Guess who’s coming to dinner?” is asked. The answer is seven close friends who find out they don’t know each other as well as they thought. The film is a light comedy that looks at how technology has affected our lives for better and worse.

The film is directed by Paolo Genovese and requires a suspension of disbelief. It starts off innocently enough: a couple including a therapist named Eva (Kasia Smutniak) and a plastic surgeon (Marco Giallini) host a dinner party where the group will gather together and watch a lunar eclipse. They are joined by two newlyweds (Alba Rohrwacher and Edoardo Leo), a married couple with kids (Anna Foglietta and Valerio Mastandrea) and a divorcee who has a new girlfriend (Giuseppe Battiston). It is obvious that the group are in Italy because copious amounts of tasty-looking food are consumed.

The friends discuss technology and admit that their phones dominate their lives. They discuss the idea that every person has a life that is partially public, private and another part that remains secret. But these guys are close and have known each other for years so they figure they have nothing to hide. Eva suggests that they all leave their phones in the middle of the table and share every message, email or phone call with the entire group. Bizarrely they all agree to do this.

It is obvious to the viewers that while this is a great concept for a film it’s also a recipe for disaster. There is a tension in the air as things are slowly revealed. These disclosures range from innocuous and throwaway things through to damaging secrets, which threaten to harm entire relationships. The ensemble is a strong one and the actors all put in excellent performances.

The film can be a bit slow and predictable because it is restricted in what it can do. It is all mostly held in-doors in the one house and location. There is music that is used to add emotion but it can be a little over-the-top at times. This is ultimately a big talk fest, which will not appeal to everyone. But if you can sit back and allow yourself to be swept away by the beautiful Italian dialogue and the witty one-liners you will be treated to one rich, interesting and nuanced story.

“Perfect Strangers” is one voyeuristic, fly-on-the-wall experience. The audience are swept away by the unfolding melodrama as more and more secrets and lies come to the fold and must be dealt with by the seven individuals. The story is ultimately a clever one and a cautionary tale for us all. When all is said and done it doesn’t matter if you have enjoyed the film or not, chances are you will never look at phones in the same way ever again!